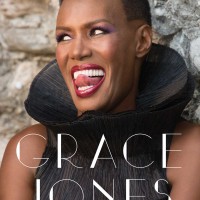 Fall is just around the corner, bringing with it a slew of new books to enjoy.

Legendary influential performer Grace Jones offers a revealing account of her spectacular career and turbulent life, charting the development of a persona that has made her one of the world’s most recognizable artists.

As a singer, model, and actress—a deluxe triple threat—Grace has consistently been an extreme, challenging presence in the entertainment world since her emergence as an international model in the 1970s. Celebrated for her audacious talent and trailblazing style, Grace became one of the most unforgettable, free-spirited characters to emerge from the historic Studio 54, recording glittering disco classics such as “I Need a Man” and “La Vie en Rose.” Her provocative shows in underground New York nightclubs saw her hailed as a disco queen, gay icon, and gender defying iconoclast.

In 1980, the always ambitious Grace escaped a crowded disco scene to pursue more experimental interests. Her music also broke free, blending house, reggae, and electronica into a timeless hybrid that led to classic hits such as “Pull Up to the Bumper” and “Slave to the Rhythm.” In the memoir she once promised never to write, Grace offers an intimate insight into her evolving style, personal philosophies, and varied career—including her roles in the 1984 fantasy-action film Conan the Destroyer alongside Arnold Schwarzenegger and the James Bond movie A View to a Kill.

Featuring sixteen pages of stunning full-color photographs, many from her own personal archive, I’ll Never Write My Memoirs follows this  ageless creative nomad as she rejects her strict religious upbringing in Jamaica; conquers New York, Paris, and the 1980s; answers to no-one; and lives to fight again and again.

Rizzoli Ex Libris is releasing I Can Give You Anything but Love, a memoir from the sardonically witty and intellectually rigorous writer Gary Indiana:

The long-awaited memoir from one of the most acclaimed radical writers in American literature. Described by the London Review of Books as one of “the most brilliant critics writing in America today,” Gary Indiana is a true radical whose caustic voice has by turns haunted and influenced the literary and artistic establishments.

With I Can Give You Anything but Love, Gary Indiana has composed a literary, unabashedly wicked, and revealing montage of excursions into his life and work—from his early days growing up gay in rural New Hampshire to his escape to Haight-Ashbury in the post–summer-of-love era, the sweltering 1970s in Los Angeles, and ultimately his existence in New York in the 1980s as a bona fide downtown personality. Interspersed throughout his vivid recollections are present-day chapters set against the louche culture and raw sexuality of Cuba, where he has lived and worked occasionally for the past fifteen years. Connoisseurs will recognize in this—his most personal book yet—the same mixture of humor and realism, philosophy and immediacy, that have long confused the definitions of genre applied to his writing. Vivid, atmospheric, revealing, and entertaining, this is an engrossing read and a serious contribution to the genres of gay and literary memoir.

Noted writer and historian Lillian Faderman maps the contemporary gay rights movement in her expansive new book The Gay Revolution: The Story of the Struggle (Simon and Schuster):

The sweeping story of the modern struggle for gay, lesbian, and trans rights—from the 1950s to the present—based on amazing interviews with politicians, military figures, legal activists, and members of the entire LGBT community who face these challenges every day.

The fight for gay, lesbian, and trans civil rights—the years of outrageous injustice, the early battles, the heart-breaking defeats, and the victories beyond the dreams of the gay rights pioneers—is the most important civil rights issue of the present day. Based on rigorous research and more than 150 interviews, The Gay Revolution tells this unfinished story not through dry facts but through dramatic accounts of passionate struggles, with all the sweep, depth, and intricacies only an award-winning activist, scholar, and novelist like Lillian Faderman can evoke.

The Gay Revolution begins in the 1950s, when law classified gays and lesbians as criminals, the psychiatric profession saw them as mentally ill, the churches saw them as sinners, and society victimized them with irrational hatred. Against this dark backdrop, a few brave people began to fight back, paving the way for the revolutionary changes of the 1960s and beyond. Faderman discusses the protests in the 1960s; the counter reaction of the 1970s and early eighties; the decimated but united community during the AIDS epidemic; and the current hurdles for the right to marriage equality.

Gallery/Scout Press is releasing Did You Ever Have a Family, the debut fiction novel from literary agent turned author Bill Clegg:

The stunning debut novel from bestselling author Bill Clegg is a magnificently powerful story about a circle of people who find solace in the least likely of places as they cope with a horrific tragedy.

On the eve of her daughter’s wedding, June Reid’s life is completely devastated when a shocking disaster takes the lives of her daughter, her daughter’s fiancé, her ex-husband, and her boyfriend, Luke—her entire family, all gone in a moment. And June is the only survivor.

Alone and directionless, June drives across the country, away from her small Connecticut town. In her wake, a community emerges, weaving a beautiful and surprising web of connections through shared heartbreak.

From the couple running a motel on the Pacific Ocean where June eventually settles into a quiet half-life, to the wedding’s caterer whose bill has been forgotten, to Luke’s mother, the shattered outcast of the town—everyone touched by the tragedy is changed as truths about their near and far histories finally come to light.

Elegant and heartrending, and one of the most accomplished fiction debuts of the year, Did You Ever Have a Family is an absorbing, unforgettable tale that reveals humanity at its best through forgiveness and hope. At its core is a celebration of family—the ones we are born with and the ones we create.

If you are looking for more post-beach fiction reads, make sure you check out new books from Daniel Allen Cox, Lori Oustlund, and H.S. Cross.

The Science of Writing a Successful Novel, The Portlandia Activity Book, and other LGBT News
'Miranda in Milan' by Katharine Duckett
'Looking for a Kiss: A Chronicle of Downtown Heartbreak and Healing' by Kate Walter