‘Let Me Explain You’ by Annie Liontas

‘Let Me Explain You’ by Annie Liontas 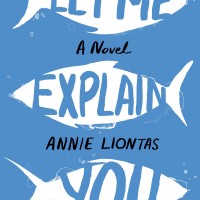 Are you in hell?

Are you in heaven?

Are you in hell?”

—Annie Liontas, Let Me Explain You

I first heard the beginning of this novel almost a year ago, while on a fellowship at Tomales Bay. Annie was a fellow in Fiction, and I in Poetry. One of the first nights there, much to my embarrassment, the faculty organized a reading for the fellows only, and we were each asked to read several minutes of work.

Annie Liontas was one of the first to read, mentioning casually that she was reading from her forthcoming novel, failing to mention that it had already been picked up by Scribner. She then read the intro, which begins with an email from a patriarch to his family, dispensing advice to them because he believes he is on his deathbed. Despite the serious nature of the email, the introduction is unfailingly funny: Stavros Steve Mavrakis has come to tell his three daughters and multiple ex-wives exactly what is wrong with them, and how they should fix it. The entire reading, Liontas had us in fits.

So, when I saw that the book had been published, I had to get a copy of it. And when it arrived at my front porch, I tore into it. Though the residency at Tomales Bay was an excited blur, one moment that still appears crisp and unwrinkled in my mind is the introduction to Let Me Explain You. I was expecting a funny novel—a hilarious, if a little common, story about the death of a father who spends his final hours atoning for the crimes he’s committed against his family. I was prepared for a somewhat normative narrative about a family overcoming the great obstacles of the past, and meeting together as adults in a time of grief.

What I was not prepared for was Let Me Explain You. This novel—tender, angry, complicated and, yes, funny—is so much more than a story about a dying patriarch. In fact, it is barely the story of a dying patriarch. It is a story about relationships—between sisters, between countrymen, between people and place, between food and memory, between languages, between time and space, between realism and magical realism. It is, above all else, a story about deep, complicated, torrential want. The characters, largely the daughters (Litza: the angry, resilient, honest one; Stravoula: the survivor, the caretaker, the one who loves through cooking; and Ruby: the pretty, unprepared one) and the ex-wives/partners (Dina, Stavros’ wife through an arranged marriage back in Crete; and Marina, Stavros’ non-romantic business partner who loves his daughters like her own), drive the story.

Never have I read a novel so driven by characters and their insatiable complications, which are so true to the way that human emotion works on an intuitive level. For all of their rage against one another, Stravoula and Litza admit that they are two halves of one peach:

“They had always been doomed from the start. It had always been Stravoula’s task to carry her sister, but Litza was gallons and gallons of water, and all Stravoula could use was her hands. So she kept losing Litza, kept scooping her up, kept losing. She could cup her hands and hold her close, but what good would that do? She could never have carried enough of Litza to make a difference.” And for all of the anger of young Stavros, his family also confronts his soft and vulnerable underbelly—in his plans for his own demise (not suicide, but his impending death, which he has learned about from a dream about a goat of death), he is confronted with his flaws and misgivings.

I don’t mean to be reductionist about the novel here, by distilling the exceptionally compelling characters down to tropes. The profundity of their being, I would hope, comes across far greater than I could fit into a review.

One very interesting component of the novel, aside from the fact that it was an entirely different book than I’d anticipated reading, is that the story is rarely driven by place at all. This is not to say, however, that it lacks landscape. Quite the contrary. Let Me Explain You creates landscape from memory quilted with food, Greece, ambition and generations. We as readers get very little of Philadelphia, or of America at all, except idealistically. But this is hardly a criticism.

In fact, this fragmentation of place enacts the experience the characters present: the trauma of family, the rupture of people and relationship, and the capaciousness for love, rage and destruction that ultimately exists between—as opposed to within—people.

What I’m saying here is: this novel is one of the realest contemporary novels I’ve read all year, and Annie Liontas is the real deal. Let’s all just hope her next book comes out as soon as possible.

‘My Lady Lipstick’ by Karin Kallmaker
'Transition: The Story of How I Became a Man' by Chaz Bono
'Frozen' by Carla Tomaso