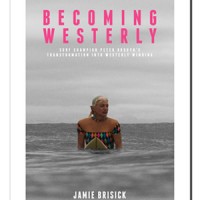 People in recovery sometimes talk about “doing a geographic,” the notion that a physical move might leave behind the self who got us into this mess to begin with and allow for a fresh start. The hitch in this plan is that when we go, we inevitably bring ourselves along for the ride, with those old behaviors tied on and clanking from our bumpers. Becoming Westerly is the story of a troubled sports legend who redefined their field then went on to an amazing second act as they transitioned from their assigned gender, into an equally complex woman. But don’t call her Caitlyn–this is the tale of Westerly Windina.

Author Jamie Brisick was himself a pro surfer for many years, and his descriptions of the sport, and especially the theatrics of Westerly, then surfing under the name Peter Drouyn, are breathtaking. Westerly was something of a prodigy, hopping on a longboard at nine years old and finding themselves immediately at home in the Australian surf. Westerly entered competitions and began to make a name for themselves in the 1970s, when the sport was still disorganized; all competitors were out in the sea at one time, with the judges on shore and barely able to distinguish between them. Even with that scattershot methodology, many of Westerly’s peers agree that the surfer was significantly snubbed in a few major contests, and that set up a pattern of haunting self-sabotage.

Westerly’s contributions to the sport are legitimate.Westerly thought two surfers battling it out on the waves made for a better contest, and competitive surfing still hews to this model. But their larger than life personality and Muhammad Ali-like boasting covered for a person often in the throes of panic and depression. Their grandiose plans, such as flying to South Africa and “auditioning” potential wives met through a full-page print ad, marriage which ended in divorce and a decade-long custody battle for son, Zac. Drunkenly calling out everyone they felt had betrayed them at an awards banquet, cut them off from the sponsorship deals that keep most surfers in board wax and Van Camp’s Pork and Beans, and makes a few into millionaires. Stints as an actor, modeling coach, oceanography student, and lawyer all peaked and fizzled out in similar fashion.

A serious wipeout in 2002 resulted in injuries including a concussion and perforated eardrum, but the 52-year-old also came ashore with a new sense of self. Experimentation with women’s clothes led to a new identity as Westerly Windina. Would the transition make life any smoother for this notoriously prickly soul?

In a word, nope. Brisick is filming a documentary about Westerly’s life journey, and Westerly manipulates him mercilessly, demanding money for clothes, makeup and tweaks to her various surgeries, dropping out of the project only to return with ever-more far-fetched demands. She insists the film end with a “showcase finale” that reveals her to the world as something like the second coming of Marilyn Monroe. When the producers agree she raises her demands repeatedly until they push back, and then retreats to sulk. It’s unclear where the film stands as a result.

Among her peers in the surf world, some embrace Westerly’s transition wholeheartedly while others maintain she is, as Westerly once said, just a stunt, a play for attention. It’s tempting to wonder if this might be true; when Brisick asks if the notorious womanizer might in fact be gay, she reveals a homophobic streak in her reply. She also distances herself from trans people, insisting she is somehow not like “those apes.” Brisick’s willingness to humor and cajole her can be baffling; at her worst, she’s very hard to like. But even as she withdraws from him to nurse another failure of her own design, he is drawn to show us her girlish delight as, now in her sixties, she still masters waves with effortless grace. Becoming Westerly is an unforgettable portrait of a hard-won second act in an already exceptional life.

We Had No Rules Defies Expectations and Takes Readers to Uncomfortable Places
The Tender, Canonical Queerness of All The Gay Saints
Special Topics: Incantations of the Obsessively Literary