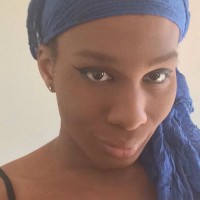 In June, I saw Dane Figueroa Edidi perform some of the poems from her new book, Baltimore: A Love Letter at the Philadelphia Trans Health Conference. She brought the house down, deploying speeds and registers with astonishing fluency and precision: now tender, now raucous, now polemical. Her performance orchestrated joy and rage, revolutionary politics and personal revelations, and though it was full of variation, it was consistently relentless, implacable, and overwhelming. Listen, it was something. Go and watch the video. 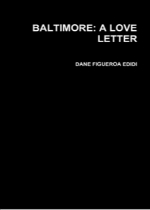 In a way, it is easiest to understand the book itself as a script, or store-house, for these performances. Where the performances felt like something bursting out, or flowing forth in abundance, the book has a feeling of intense concentration, of many things being crammed into the smallest place. Audre Lorde famously noted “of all the art forms, poetry is the most economical” and it is clear that this is a book of poems because it is a book produced by someone with a lot to say, and a need to get it said quickly.

Though its speaker possesses a long, almost mythical, view of both familial and world history, (a view more fully on display in Edidi’s novel, Yemaya’s Daughters, she comes to us here responding to urgent contemporary issues–to the uprising (or “riots”) in Baltimore, to the ongoing exploitation and murder of black people in America, to the ongoing murders of trans women of colour- and to her immediate personal experiences as a black trans woman in America–love affairs, personal losses, and the need to make art.

Throughout, the book develops and deploys a sophisticated analysis of structural oppression, through the related categories of racism, exploitation, colonialism and transphobia, and of the ways this plays out as personal experience. But the book is always careful to bring these things together, not in artificial cleanliness and order, but as they do in our lives–in an intense, probably inextricable tangle.

As it combines these subjects, so it brings together also a range of tones. At times it is highly poetic, to the point of sounding like a contemporary Edgar Allen Poe: “behind a dark curtain made of ebon wings/Night Birds’ moans sound like facades of broken/melodies”.

But then it will turn on you, into ardent colloquial protest:

Or stately and measured oracular pronouncements: “Let not the sun dissipate you as it does so many dream/scattered like seeds to an infertile ground/an earth giving birth to only tears”.

For all the abruptness with which is can move between them, it would be a mistake to imagine that one might criticize or compete with another. These voices are no kind of modernist “babble”: they are better understood as strategic choices on the part of the speaker, as variations on the principle of code-switching. The book’s poetic is not polyvocal but additive: it insists that the speaker, as a complex human, experiencing multiple things at once, be heard in all of the disparate voices she deploys in her life, in order for a true understanding to be reached. The varied tonality of the book is the poetic counterpart of its intersectional understanding of both identity and politics.

Where, in performance, however, this code-switching is rousing, in the compressed form of the text it becomes dense and clotted. In the move from performance to script, a move also takes place from something that will lift you up out of your seat, to something that invites you to sit down and think.

Not all the pieces survive this transition equally well. But Edidi’s poems, taken as a whole, speak both passionately and penetratingly. Hers is a voice that needs to be heard, and as a reviewer, all I really have to say is, you’d better be listening.

‘War of the Foxes’ by Richard Siken
"Be Amazing: A History of Pride" as a Gift to My Younger Self
'Insomniac City: New York, Oliver, and Me' by Bill Hayes