A Poem by Diana Hamilton

A Poem by Diana Hamilton 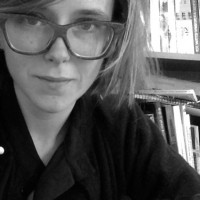 This week, a poem by Diana Hamilton.

“WE ALWAYS TREAT WOMEN TOO WELL”

Even when she was running her tongue along the part of the block of wood she knew to be the clitoris, she also knew that this thing was probably not a woman: blocks of wood rarely were, nor the floors beneath them. This specific block could certainly not have been begging her to let it come on her face, could not have wriggled away, somehow, while pulling her closer, and, to top it all off, could not have been attractive either way, being remarkably smaller than any woman to whom she was likely to be drawn. Maria knew all this, but this knowledge did not prevent her from putting aside all fear of splinters, finding the telltale knot in the wood, and imitating the movement of her tongue with two fingers on her own, more believable clit. When it—when she—was finished, the smell of pussy was as real as her own insuppressible moans had been, but this alone would not have satisfied her doubt. In the awkward moment of clarity, when she found herself, hand now scraping her zipper, standing over the definitively inedible thing, it was only the certainty of its shared pleasure that got rid of her embarrassment. She had to know the wood desired her too.

It had been a few weeks now since the Event, the world’s sudden “Feminization,” as the journalists first called it, before they become occupied otherwise than with news. They did not call it this right away. Right away, that is, no one quite mentioned it: How do you tell your readers, your colleagues, your lovers, your children, that the street-signs, the streets themselves, had all revealed themselves as women, calling out to be fucked? The talk started quietly, between partners, and the event existed only in the form of a peculiar fantasy before its unlikely reality could be admitted by the general public. Maria had assumed she was going a particularly sexy kind of crazy until her partner had started fingering the cushion of the couch she was bent over, the ass-slapping having distracted from her effort to restrain herself. At that point, they knew it—every inch of the surface of the couch was a potential breast, cunt, or mouth, and it was their job to serve all the needs this implied.

At first, this was as pleasant as it ever is to live up to someone else’s expectations, as it always is to let sex take priority over either paying or accruing debts (computers and cash registers alike having changed functions), as it can be to live in a moment that lives up to its name in its distance from other, recent moments. Inmates quickly worked hard at fucking the locks in just the right way for them to spring open; guards busily handcuffed themselves to bars while the air itself straddled their faces; rapists were distracted long enough for their victims to kill them, their dead bodies quickly becoming subject to matter’s feminization. But as even the initial boundary on the Event slipped away—as time’s own labia swelled in evidence of what had happened having also happened retroactively—as history became only the history of existing stuff’s continued demand for pleasure—the accompanying hunger, boredom, and existential fits just added to the list of things to fist.

DIANA HAMILTON‘s first book, Okay, Okay (Truck Books 2012) dealt primarily with women crying at work. Three chapbooks came out in recently: 1. Universe (Ugly Duckling Presse), a long poem about examples in moral philosophy; 2. Some Shit Advice (The Physiocrats), in which the speaker provides advice about shitting; and 3. 23 Women to Kiss Before You Die (Make Now Press), a collection of four poems about consent, female sexuality, and the quotidian. “We Always Treat Women Too Well” appeared in 23 Women to Kiss Before You Die and perfectly represents her sexual orientation.

May We Present... Nefertiti Asanti's fist of wind
Ocean Vuong, "The Prodigal Son's Lament"
Rebecca Coffey: On Sigmund Freud's Relationship with His Lesbian Daughter Anna and Using Fiction to ...