‘This Life Now’ by Michael Broder

‘This Life Now’ by Michael Broder 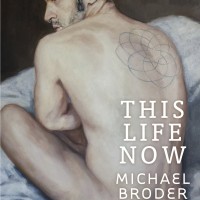 “The past is a foreign country,” wrote novelist L. P. Hartley in 1953’s The Go-Between. “They do things differently there.” This Life Now (A Midsummer Night’s Press), the debut collection from Lambda Literary Award finalist Michael Broder, foregrounds its narrator as the go-between for his current and past selves, to American decades where things were done differently—including those plague years barely survived.

Therefore Broder’s speakers, like Mark Doty’s, in their brooding nights of memory, are often wide awake with survivors’ guilt:

The good die young, but sometimes
they come back, dripping with something
we can’t name or identify,
an acrid perfume, they reach for us
like a taproot, draining
our sweet wells of oblivion
until we lie drenched in a common sweat […] (“The Remembered One”)

This Life Now proves an ironic title for this perspective rotating its prism between past, present and future such that the vividly rendered figures “stand there many-refracted in my compound eye” (“Ommatidia”). Broder’s spectral interplay between temporal modes brings immediacy to his organizing principle of chronological surveillance: “By the time we meet, Bobby lies dead and the guitar lies untouched in its dusty case”(“Tony Poem”); “I had a friend who predicted John / would be the first Beatle to die, / but we were no longer speaking / by the time it came true.”

But is this only elegy, or is the poet driving at something else if, in “Days of 1999,” “summer strangles like a telephone cord”? This motif of muffled communication, of cut-off speech, encompasses narratives in which friends fall silent, resonating through images like that of the dormant guitar. Communication is a kind of penetration, essential to the life of the sexual outlaw. Coming out, and speaking out, intertwine. This obsessively oral sense with which Broder’s speakers enact their “shattering of silence” seems to position eros and articulation as inextricable:

Here in the dark, the Heliconian muses
thrust the vatic staff down my throat

and I assume the poetic mantle. (“Investiture”)

When Broder’s narrator laments various estrangements, his spectral go-between offers mediations to estranged parties only conceivable through text. “Later Than I Would Like It to Be”:

Shadows lengthen on the cold pavement,
October stains the leaves on dry, rustling trees,
you become loam in the ground—
dissolve, disintegrate,
like words that made no difference on first hearing—

Words like:
Nobody has the flu for nine weeks;
see another doctor;
drinking will kill you before the virus has a chance.

A guitar lies unheard, words float unsaid to yearned-for beauties, acquaintances fall quiet; but in construing memory’s detritus of Budweisers and brown paper bags, of Partridge Family crushes, toy cars and park bench trysts, Broder plucks his own sonorous notes—“Doug had light brown flyaway hair, the kind of hair boys would flick out of their eyes with a jerk of their neck in kind of a girlish way”; “in a pizzeria, over a vial of pills, her eyelashes fluttered, without irony” (“A Brief History”).

Tonally, Broder spices the sad warmth infusing his remembrances with sudden, playful shocks of eros. “I come in my jeans. / I come close to love,” he finishes “Investiture.” When drawing on literary theory, the style dons erudition lightly enough to achieve a delicious balance of cleverness and play. In “The Old Meaning / Moaning Dichotomy,” his speaker skewers his own academically trained coping mechanisms which fail on “bad days,” observing: “Our overriding impulse is toward / resolution—/ this subsumes both the pleasure principle / and the death wish — coming and going.”

Yet Broder will always take the risk, on the heels of his witty and cerebral articulations, of some rawer emotional landing-point:

[…] on bad days I seek a theoretical basis
for my actions, or else I seek experience ,
drink experience, as if by sucking and swallowing
I could replenish some heart center,
something I did not even know was empty. (“The Old Meaning / Moaning Dichotomy”)

How do innocence and acceptance co-exist? As with the dead instrument and the strangling telephone cord, Broder’s brand of elegiac yearning intermingles with his streetwise, yet not world-weary, endurance, finding in his own arc a representative journey, the song of a generation. His endurance is not indifference: his acceptance is not assent. Stoicism exists alongside vulnerability: “This fabric, once torn, cannot be mended,” his speaker contends in “Random. “You call it industrial chic; I call it / what I grew up with.”

This Life Now, with a faintly ironic echo of “This American Life,” offering its audience a window into one man’s existence—bridging mainstream and margin, domesticity and sexual adventure, survival and risk—weaves its narratives with a diligence mellowed by experience, that suggests patching our torn retro attire is unnecessary, and perhaps undesirable, if weathered fabrics are made serviceable. The rip, the fray, the split, tell our story. Heirloom fashions inspire new ones. A keen and appreciative eye is the go-between.

‘[insert] boy’ by Danez Smith
One Man's Trash is a Glimpse at Humanity Within the Peculiar
'Party of One: A Memoir in 21 Songs' by Dave Holmes