‘The Spectral Wilderness’ by Oliver Bendorf

‘The Spectral Wilderness’ by Oliver Bendorf 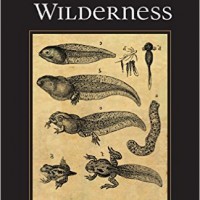 In one of Oliver Bendorf’s poems, near the end of his Wick Poetry Prize-winning collection The Spectral Wilderness, he says, “Road sign says OVID 9 MILES,” and thus invokes the Roman Golden Age poet of The Metamorphoses, Publius Ovidius Naso (known to us, simply as Ovid). Ovid is the classical poet of transformation, and he announces that at the beginning of his epic of mutations:

My souls would sing of metamorphoses
But since, o gods, you were the source of these
bodies becoming other bodies, breathe
your breath into my book of changes. (trans. Mandelbaum)

The spirit of Ovid and singing transformation of bodies—or in this case, a body—continues in Bendorf’s poems that explore what it means to be in a state of becoming against the backdrop of a world rigidly gendered. In these poems, the poet works through uncertainty, doubt, coping with endless new, much love and always wonder.

The opening poem, “I Promised Her My Hands Wouldn’t Get Any Larger,” introduces us to the voice of the body-in-flux and in love: “But she’s decided we need to trace them in case I / turn out to be wrong.” There’s nothing guaranteed about how a body transitions physically, and we know the wonder, the anticipation the poet feels at the changes underway from the striking ending of that poem. But the poet, the speaker undergoing changes is neither helpless nor a passive towards his own metamorphosis. He resolutely becomes architect and builder of the man he wants to be: “I start learning how to build something” (“The Manliest Mattress”). And there’s no truer, more essential idea to “poetry” than building or making, the Greek root of the word poetry means “to make” or “to do.” So here we have Bendorf, building a self, building poems.

In “Split It Open Just to Count the Pieces,” Bendorf repeats the command “Call me [x]” or “Call me [y],” and we can’t help but think that this new, exciting voice is putting his alongside those of Herman Melville who opens Moby Dick with “Call me Ishmael” and Marilynne Robinson who opens her gorgeous Housekeeping with “Call me Ruth.” Listen to Bendorf’s electric lines:

Call me giddyup and Tarzan, riot boy
and monk, flavor-trip and soldier and departure.
Call me Eiffel Tower, arrondissement, le garçon,
call me the cigarette tossed near the leak
of gasoline. Call me and tell me that Paris is on fire at last,
that the queens of Harlem can have their operations
and their washing machines. Call me seamless,
call me sir.

In this poem with an epigraph from Judith Butler, who sits atop the pantheon of queer theorists, Bendorf alludes to another foundational queer text—Paris is Burning. And that reference is not just a hat-tip or knowing wink, it reminds us of the violence that is both risk and reality for those who violate the gender binary.

But this isn’t a text that regrets, mourns, apologizes—again, I think that it’s wonder that subsumes these poems (or perhaps my own response is one of overwhelming wonder). In the final section of the book—where we come to see the ghostly wilderness the title proclaims, Bendorf takes us through something that is this-world and not-this-world, an oblique path, but one that makes sense as we trust the poet-guide. I just love the spirit of generosity with which Bendorf grabs ahold of the reader, admitting his flaws: “I am just as full of shit as everyone, incl. you,” which also calls us into our own human weaknesses and imperfections. And then this, which must—how could it not?—win over even the most steely of readers:

I mistake seeds for nothing all the time.
I mistake time for space, space for freedom,
sparkles in the alley for a sign that our
universe is sentient after all, and loving,
and will take care of those of us who pray,
however mistakenly, not on our knees
exactly, but with our hands clasped
that we may be mistaken for believers.
I mistake my hands for belief all the time.

Bendorf returns, in this final poem, to the concern of the first poem—the body’s tools for “making and doing,” the hands. And he professes his trust in goodness, freedom, and the capacity to make and do; that makes sense from someone who has just taken us through moments on his journey, as an adult, to become a new man.

In T.C. Tolbert and Trace Peterson’s anthology Troubling the Line: Trans and Genderqueer Poetry and Poetics, Bendorf writes in his poetics statement: “Every time I write a poem I make a little body. Then I name it with a title. And then it’s beautiful or moving or ugly or whatever and then maybe other people read it.” The Spectral Wilderness is full of beautiful little bodies, written into being (into becoming) by a maker from whom we’ll continue to be amazed and enchanted.

Douglas Ray is author of He Will Laugh, a collection of poems, and editor of The Queer South: LGBTQ Writers on the American South, a finalist for the Lambda Literary Award. Both books are available from Sibling Rivalry Press. A Lambda Literary Fellow, he is Poet-in-Residence at Indian Springs School, an independent boarding and day school in Birmingham, Alabama.