‘The Gods of Tango’ by Carolina De Robertis

‘The Gods of Tango’ by Carolina De Robertis 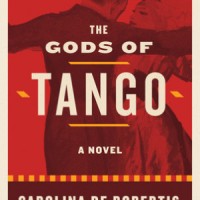 There’s a way a novel can preserve stories, especially the stories of women, especially of marginalized people, that would otherwise be lost to us. We know these people existed, that they’ve always existed, but their lives have gone unrecorded. Carolina De Robertis has done the joyous and affirming work of reclaiming history in her novel, The Gods of Tango.

De Robertis sets her work during the massive migrations to Argentina just before WWI. The immigrants live in crowded warrens of apartments where anarchist strategies are fomented, men and women struggle, and the music of the streets and brothels swirls around them. And this is another history that De Robertis chronicles—the emergence of the tango from the soul-strengthening drums of enslaved Africans to the urgent passions squeezed through the European bandoneons.

In the center of this cacophony of cultures, poverty, danger, and possibility is Leda, who arrives in Buenos Aires from Italy as an unexpected widow at seventeen years old. Hidden in her luggage is her father’s violin, a supposed gift to her now dead husband. As a child she slipped this violin out of her home and taught herself to play in the forests around her village. Now, Leda is trapped and silenced in a world where there is no “decent” work for women, where she can’t leave her small enclave without risking attack, and she, like all women, is not allowed to play music. Especially not the disrespectable, wildly popular music of the tango that is played by the men in her community courtyard.

But she watches and listens. In a powerful moment for the novel, Leda shuts herself in a small room with thin walls and plays the violin without making a sound. She doesn’t dare pick up the bow.

The joy of it. Savage. Terrifying. Music as piracy. Music without sound. One hand mimed the motions of an invisible bow, while the other curved around a neck that it had always loved, had never stopped loving, a sensation as fresh as it was deeply familiar. . . She played this way for hours until finally she fell asleep with the violin’s curves pressed against hers.

Leda’s claustrophobia, desperation, and poverty build until the day she cuts off her hair, puts on her dead husband’s clothes, and walks into the city, into a void of knowledge and experience. She becomes Dante. For Dante the daily terror of discovery is worth it. As a man, she is allowed to play her violin. She joins a tango orchestra just as the music is becoming acceptable and sought after. Their audiences change from the patrons of rough bars to the wealthy elite in their cabarets.

As she becomes skilled in survival as a passing man, as she plays sexually powerful music each night, as she accompanies her band mates to bordellos, Dante’s own desires become possible. She blends in with the other men by paying her peso for a half hour with a woman. She has them take off their clothes. And she looks. She does just this for a long time. Until one night she does more. And now De Robertis gives us another history, this one of a young person with no preset rules and no one to ask, who is finding their own, unguided way to their sexuality and gender.

The novel is made richer by the author’s choice to add perspective by way of quick scenes from other points of view: a shipmate, her dead husband’s friend, an old violinist who takes Leda as a pupil, the prostitute who teaches Leda cunulingus, and Santiago, the leader of their orchestra. These scenes serve as a circling camera that gives us a 360-degree view of the main character.

As we read, Leda, sometimes Dante, sometimes Leda, grows into an adult who has a magnificent talent and a great capacity for love. One day, looking in the mirror at the person standing there, Dante/Leda thinks, “A not-man. Not-woman. A fallen woman-risen-man.”