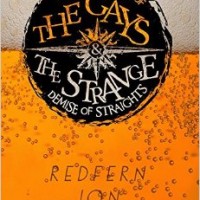 Ah, perspective. According to the Swansea Tourist Information Centre, the second-largest city in Wales sits on the sandy five-mile stretch of Swansea Bay beach; it’s a “vibrant hub” with a “fabulous market” and “a great place for foodies.” Whatstheweatherlike.org names it “the wettest city in the United Kingdom.” In The Giddy Death of Gays and the Strange Demise of Straights, Redfern Jon Barrett’s rambunctious second novel, an oddball and one-of-a-kind romantic comedy, Swansea’s not much of a habitat to celebrate. At best, the choral voices of Caroline, Rutti, Dom, and Richard, the novel’s twentysomething first-person narrators, damn it with faint praise as relatively affordable and quiet; and as better than nothing. Usually, though, they dwell on faults. Couples lurch drunkenly and terminate quarrels along these lines: “You’re a fuckin’ wanker and a fucking stupid prick an’ all”; the beach features “old men and thrown-away needles”; the gay venues are sad, provincial throwbacks (eg., the “bar was tired, lumpen queens slumped over their cocktails whilst thonged dancers cruised the strangers they’d fucked a hundred times before”); and, as one character reports, the city doesn’t “ever even try to be beautiful or interesting” because it was shell-shocked during WWII and never recovered. When the local franchise of Skyline—the “shitty nightclub with its tacky strip evenings and fourth-rate DJs, the chain with a hundred identical clubs in a hundred shitty towns”—burns down, skinheads and rabid nationalists with anti-minority, anti-queer, and anti-Muslim opinions quickly take to the streets.

With dead-end jobs, unhappy pasts, and seemingly compromised futures, the novel’s foursome of characters are also personally interrelated: Caroline and Dom are dating; Rutti and Richard shared a flat until clashes arose; Dom has taken Rutti’s place as Richard’s roommate.

Barrett’s accomplished at handling the quartet of distinct first-person narrators. Caroline, inhabiting “the life of a geography postgrad” has just enough money to both eat and pay rent. She works at a “shitty place that calls itself a bar.” She’s in love with Dom, an introverted maths grad student. Richard’s shy, an avid gamer, and employed by a call center with a daily surplus of idiotic callers. Seething, critical, contrarian, and politicized, Rutti’s narrative opens with a sarcasm that underlines their loved and hated outlier status:

Don’t avoid other children. Don’t play with dolls. Don’t be so sensitive. Don’t be a wilting wallflower. Don’t doodle. Don’t dream. Don’t wrestle other boys. Don’t forget to shave. Don’t kiss male friends. Men don’t love men. You certainly can’t love more than one at once. The rule-to-a-happy-life are the same in south Wales as anywhere else.

A perfume shop clerk—the latest in a long line of “spectacularly dreadful” retail jobs—who’s fond of scathing indictments of fellow staff and customers, contemptuous Rutti is discontented with a vengeance. Caustic but lonely—and a feminist fond of non-patriarchal pronouns: “I asked hir if zie needed anything”—Rutti’s central to the story, if not to the romantic relationships.

The novel’s loose, episodic plot finds a center when Dom and Richard realize they are in love. Certain too that they’re not gay, or even remotely sexually interested in each other, they proceed tentatively and with numerous setbacks on a trail with no map. Outside reactions—from dumbfounded and angry to disbelieving—ensue. And once Caroline is informed and—eventually—agrees to a polyamory trial-run, Barrett maintains a comic tone that swings between hopeful and despairing, consistently exploring the endless complications of the triadic formation. Along the way, too, questions related to categories and human nature (as well as to monogamy, sexuality, and gender) are posed and answered with an engaging level of provocation. Meanwhile, between cruising bar toilets and attending feminist discussion group meetings, Rutti searches for their own questions related to love and belonging.

Throughout, Barrett concludes intermittent chapters with science-fiction tinged scenes set between 23 and 55 years in the future (with the rest of the novel set shortly after Beyoncé released “Single Ladies” circa 2008).

We all know “There’s no place like home,” but in these tantalizing vignettes centered on a trip to a newly-formed Iberian republic, Barrett—born in Wales and currently living in Berlin— fondly throws in an amendment: “But there’s no reason you have to stay there.”

New in September: Sarah Schulman, Gengoroh Tagame, Olivia Laing, and Eileen Myles
'The Prince and the Dressmaker' by Jen Wang
Metanoia is a Powerful Examination of the Community-Based Responses to the AIDS Crisis