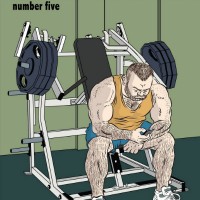 Matt and Michael have been a couple for eight years, but when the relationship falls apart, Matt retreats from commitment, preferring hookups with guys online—one-night stands only. Despite cajoling and encouragement from his married friends Chris and Kris (“the Chrises”), Matt remains emotionally distant, trapped by his fear of getting hurt again and his reluctance to put effort into something he’s sure will never work out.

But Connor is different. What starts as just another hook up changes when the sex turns out to be fantastic. Connor is visiting Vancouver from Australia; he talks to Matt in the living room, not just the bedroom; he seems like a great match. The only problem is he’s married. Straight married.

At first, that doesn’t seem to make much of a difference. Connor’s wife is thousands of miles away, and Matt rationalizes that both gays and straights fool around on the side. His friends warn him that no good will come of this relationship, but he brushes their well-meaning advice aside.

As the weeks go on, Connor pushes Matt to do more things together—talk, go out to eat, catch a movie. Matt resists, but when he does give in, more problems emerge, because Connor’s closeted life means that he doesn’t see himself as gay, and he’s scared of being identified in public as such. At the same time, he tells Matt how special he is, and he’s still caught up in stereotypes, praising Matt because he’s not “the ballerina type.” Matt tries to broaden Connor’s experiences, inviting him to dinner with the Chrises, and then to a gay bar, in hopes that Connor will gain a broader view of what gay men are.

It all culminates one night, when Connor inadvertently blurts out, “I love you.” Later, Matt texts back that he loves Connor, too; he’s regretful that he didn’t respond at the time. Just as Matt’s friends predicted (and as readers also suspect), the relationship ends. Connor refuses to answer texts, emails, calls or contacts via his online sex profile, shutting Matt out, while Matt relives the same self-loathing and abandonments he felt when Michael left him. But this time, Matt finally hears what his friends have been telling him all along: he needs to respect himself, quit the pity party and let down his guard a bit, so he can make real connections with people. 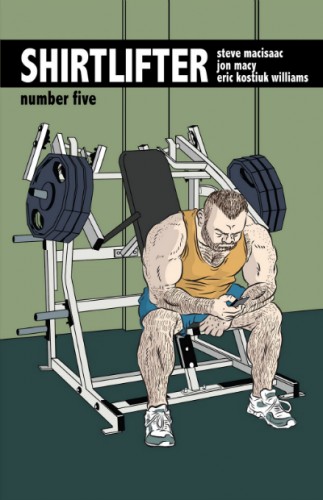 This story, called “Unpacking,” is spread across volumes three through five of Shirtlifter. Other stories by MacIsaac in these books are semi-autobiographical and deal with similar issues around the psychology of gay men, maleness, gay identity and how being closeted (or not) and/or recognized (or not) by society plays with one’s mind. Readers may feel frustrated by Matt’s self-pity and stubbornness, but they won’t be able to help but recognize themselves in his attractions, maneuvers and self-revelations.

Guest artists in various issues include Fuzzbelly, Justin Hall, Ilya, Jon Macy and Eric Kostiuk Williams, who also contribute stories about gay male relationships. In Justin Hall’s tale, “Liar,” a hitchhiker seems to be playing his ride, but there’s a noir twist at the end when the driver’s motive is revealed. Macy examines his attraction for smaller men, while Fuzzbelly pokes fun at the cheesiness of some erotica. Williams contributes a wordless reverie about how lovers literally swallow each other up, and Ilya illuminates a gay male dinner party via theater talk. These stories expand the view of the gay male experience by examining stereotypes and the realities behind them, and by sharing the real joys and frustrations of gay life.

John Rechy: On the Gay Sensibility, Melding Truth and Fiction, and His Literary Legacy
A New Publishing Venture Reissues Gay and Lesbian Crime Fiction from 60s-90s
'Flat: Reclaiming My Body from Breast Cancer' by Catherine Guthrie