Read an Excerpt from ‘The Right Side of History: 100 Years or LGBTQI Activism’: Miss Major Griffin-Gracy’s Reflections on the Stonewall Riots

Read an Excerpt from ‘The Right Side of History: 100 Years or LGBTQI Activism’: Miss Major Griffin-Gracy’s Reflections on the Stonewall Riots 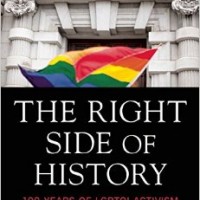 The book shows how LGBT and Intersex folk have always been in the forefront of progressive social evolution in the United States: artistically, spiritually, and politically. It references such celebrated heroes and heroines as Abraham Lincoln, Eleanor Roosevelt, Bayard Rustin, Harvey Milk, and Edie Windsor, all having played parts in the nation’s steady advance towards full equality.

In the following excerpt, trans activist Miss Major Griffin-Gracy recounts her experiences at the Stonewall Riots.

 I was never a fan of Judy Garland until I heard that she’d died. But then they played some songs that she did, and they moved me to tears. I couldn’t keep my nerves together so I went home, cried my heart out, then had a few drinks and decided, “I can’t be in this house alone.” And so I went down to Stonewall.

The girls and I called Sheridan Square “the meat rack.” There you’d find the most beautiful boys in New York waiting, hoping to catch a john. Or they’d come back later, and you could scoop them up for soup and a sandwich and a warm bed. The Square was actually a long rectangle of heated anticipation for sexual activity with Christopher Street on both north and south sides. It was a sort of dog walk and meeting place.

But the Stonewall Bar was the one place we could go to relax, be ourselves, not have to explain who we were—if we still had all our parts and if they worked. Of course, there were drag queens, too, but there were more trans-oriented women because drag queens would go to gay bars and not have a problem. Transgendered people, like Marsha P. Johnson and Sylvia Rivera and Bambi Lake, would be at Stonewall so you could score whatever you needed: sex, drugs, or boys. There were two floors: downstairs was where the bar was, and upstairs was where the activity was—cute little spaces you could stand in and prepare yourself to join the mile-high club.

At the end of 14th Street under the freeway—Henry Hudson Parkway— trucks would park, hundreds of trailers with the backs open. You could climb in and have sex from one end to the other in the pitch black. Everybody met there: the leather fags, the cowboy fags (who always seemed tiny with big hats), the muscle guys…and uptown preppies would come down. The trucks were Switzerland—a neutral zone—where everybody would meet and be okay because trans people couldn’t get into some bars; we couldn’t even get drinks unless we were doing shows. But the trucks were open to everyone.

Underage hustlers often hung out in the square harassing the “girls” from Stonewall; they were just being boys—acting out, protecting their little male egos. Mainly, they hassled people of color. White girls got off easy, but black girls were all too familiar with arrest procedures, paddy wagons, and holding pens. And they paid the price. 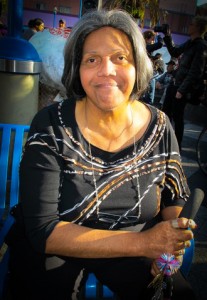 At the time, you’d be in a club dancing with someone when you’d hear that nightstick hit the door twice—always twice—bam bam. The moment it happened, the lights would come on; you’d step away from your partner and try to be sure you were wearing three pieces of appropriate clothing. And this happened regularly—not just in New York, or in Chicago, or Los Angeles, or in San Francisco. Cops would walk in slowly like they owned the place, eyeballing everyone, pushing people with nightsticks. If they put you in a paddy wagon, you’d be hauled off to the Tombs (jail). If they put you in a car, they’d take you to some alley or empty parking lot, make you suck their dick, take all your clothes, throw them in the trunk of their car, and tell you to go home naked. But at jail, a court-appointed lawyer would take your case and make you pay through the nose: get the keys to go to your apartment and take your clothes or fur coats while promising to get you out in a few days. That was another racket: attorneys received tips from cops, who then received kickbacks, but you got no bail. And if they sent you to jail three times for some misdemeanor, you could count on the fact that the fourth time you’d be sent up on a felony.

The shit had been going on for decades with severe injuries of people trying to escape bar raids. If they caught you sneaking out a window of a bathroom—there was always some cop outside waiting—he’d beat you unmercifully with that stick until you were unconscious, then haul you off to jail. Back then it was survival of the fittest.

By June 1969, everybody was fighting for someone’s rights somewhere. Blacks were fighting for their rights; women were struggling to get equal rights and equal pay; everyone was trying to get that war stopped to bring people’s sons home from Vietnam. New York was boiling. We’d all melted together at anti-war demonstrations, women’s rights marches, and civil rights campaigns. Most of us had been busted at sit-ins, be-ins, and smoke-ins.

The night of Stonewall, two friends and I sat in Sheridan Square talking with the boys, trying to have a good time. Miss Major Griffin-Gracy Some were talking about Judy Garland; some were talking about a party. Sylvia Rivera was talking about a group she was trying to start—a trans group for girls who worked the street: Street Transvestite Action Revolutionaries. Finally, we went to the bar. Not long afterwards, we heard the nightsticks, and the lights came on. It was a weird feeling. Everyone just looked at each other this time. The police poked us in the back as they issued us toward the front door. Up the street, there was a paddy wagon; cops were there. Some girls were already inside. Others inside the bar were refusing to be frisked. Then there was a loud crash; some said someone threw a shoe or a beer bottle; some said it was the boys standing around—spectators—raising all kinds of commotion. Some said the cops tried to beat up one of the lesbians and she fought back, which was when all hell broke loose.

We started fighting; I could hear people screaming. I heard some guy tell the cops, “Don’t hit me in my face,” and thought, “I should just turn and knock him out myself.” So I turned back and spit in the face of that cop, and he knocked me out, and that’s all I remember. I woke up in the Tombs.

At the jail they kept us all together. I woke up when it was getting light. Everyone was talking about what had happened and that it had continued, that it hadn’t stopped with us. It felt kind of good not to take that shit any more. They let us out that morning at 10:30 or 11 a.m., and that night we went back to Stonewall.

We didn’t know where anyone was; we didn’t know who was still in the Tombs or where our friends were. I didn’t find some for days. A couple of girls who hadn’t been arrested took friends home and helped them heal—gave them baths, gave them clothes. I lived uptown at 85th and Amsterdam and didn’t know what was happening for a few days. Most trans girls didn’t like the Village; the people down there (who were mainly white and middle class) weren’t nice to us trans girls. That’s why we all went to the Stonewall bar in the first place.

One of Sylvia’s friends called to tell me that a new political movement was getting started. But things were still sort of splintered. Right after that, Sylvia and I went to Central Park, where she’d been asked to speak. I went with her; we thought it would be okay. Maybe it was Sheep’s Meadow? There were all these beautiful white boys there, but they started booing and throwing things at her. We were in tears. We swore we weren’t going to take that shit anymore after Stonewall, but rumors were flying that we did drugs and were thieves and junkies and whores. So I stepped back. Sylvia and Marsha started doing their thing—becoming trans activists…

The most amazing thing for me out of all this is that the movement had a meeting to decide whether they should put “T” into this political thing of LGB…. Why even vote on it? It should have been there from the beginning. I don’t understand why the “T” shouldn’t have been the first letter because of Stonewall riots, because we were the ones who were out front before they took it, stole it—like they do everything else in this country. But now we’re rising again, and we aren’t going anywhere; there are no closets to hide in. We burned the house down.

Excerpted with Permission from: The Right Side of History: 100 Years or LGBTQI Activism by Adrian Brooks (Cleis Press, Berkeley 2015)  (c)2015 Adrian Brooks.