‘On the Move: A Life’ by Oliver Sacks

‘On the Move: A Life’ by Oliver Sacks 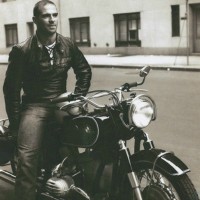 When the writer and neurologist Oliver Sacks was in the sixth grade, one of his teachers wrote of the budding scientist, “Sacks will go far, if he does not go too far.”

What is so impressive and charming about his latest book is that Sacks has apparently done both. His accomplishments—which include bestselling books of neurological case studies (The Man Who Mistook His Wife For a Hat) and transformative research (Awakenings)—stand alongside his headlong explorations of hallucinogens, amphetamines, motorcycling, powerlifting (at one point, he was nearly crushed by 1200-pound weights on a leg press), and six-hour solo swimming excursions with poisonous jellyfish.

At heart, Sacks is a rampant enthusiast, and for much of his life, he was a resolutely solitary one, a “pilgrim soul” who, as he confesses, had not had sex for thirty-five years. But in this satisfyingly unguarded new memoir, he finally trains his tremendous observational skills and curiosity onto the particulars of his personal life. His fleeting love affairs with fellow motorcyclists, weightlifters at Muscle Beach, even denizens of the YMCA provide a poignant undercurrent to the genuine blaze of his achievements. 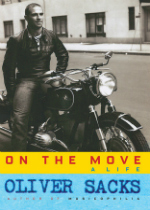 As lifelong journal-keeper, Sacks has, by his count, nearly a thousand journals, and he writes about his past with a precision that most memoirs can’t hope to capture. Born in England to physician parents with a schizophrenic brother, Sacks spent his childhood “filling the house with noxious gases” from chemistry experiments and weightlifting naked in his bedroom. After graduating Oxford and starting out as a doctor, he eventually moved to America to continue his research, but not before crisscrossing the continent by motorcycle.

Eventually, with stints in Los Angeles and San Francisco, Sacks settled in New York City, where his work at the Beth Abraham hospital introduced him to patients frozen from the “sleepy sickness” pandemic of the 1920s. As an experiment, Sacks administered a dopamine drug to the patients, and the “astonishing, festive awakening” that followed—as they came back to life after decades-long catatonia only then, sadly, returned to it—provided Sacks with riveting subject matter for the book Awakenings, which later became a film. Since then, Sacks has worked as a kind of roving neurological anthropologist, writing about autism, deaf communities, perception, and even his own period of psycho-pharmacological adventuring and amphetamine addiction, what he came to call his “evil years.”

While he has lived an exceedingly rich and solitary life, “a lifetime of keeping at a distance,” he writes, the book is leavened by rich, often epistolary relationships with the poet Thom Gunn and the evolutionary biologist Stephen Jay Gould, among others. The buoyancy of Sacks’ few love affairs often led into unexpected darkness: a first crush at Oxford ended up dying months later from cancer; another turned into a drug addict. As told in one of the book’s most touching chapters, a twenty-eight-year-old Sacks fell for another bodybuilder, Mel. They moved in together, albeit chastely, and after workouts, Sacks would often straddle him and massage Mel’s “shapely, powerful” back muscles. When one session caused Sacks to orgasm inadvertently, Mel rose, showered and announced that he was moving out. Years later, Mel (then married) found Sacks living in San Francisco and invited him to a gay bathhouse, only to reveal that he too had been stricken with a terrible disease. Recently, Sacks revealed his own terminal cancer diagnosis, a heartbreaking detail made bittersweet by the final sections of the book, which describe him falling head over heels for another writer, Billy, with whom he now shares his life.

Sacks’ memoir offers a compulsively readable, if intimidatingly long, catalogue of his interests—cephalopods, scuba diving, 19th-century natural history journals, Mozart, etc.—but nowhere is the book more fluid, nor more seductive, than when he writes about his true love: motorcycle riding. As the accompanying photos prove—given his weightlifting, affection for motorcycles and that lace-up leather number—the burly, handsome Sacks could have been a Tom of Finland model—perhaps the only one who could tell you what the hell a cephalopod is. During a residency in Los Angeles, Sacks would set out on Friday evenings to the Grand Canyon, laying flat on the tank of his bike, going over a hundred miles an hour, for hour after hour, “the silvery road…sucked under my front wheel,” and return to L.A. for his neurology rounds Monday morning “with hardly a sign that I had ridden a thousand miles over the weekend.” At one point, Sacks befriended another motorcyclist, and they would ride “so closely jammed together we sometimes felt like a single leather animal.” It’s in moments like this that Sacks’ book, as in his life—at once so restrained and thoughtful—achieves a shimmering grace in motion.

Austin Bunn is a writer, screenwriter, and professor. A Michener-Copernicus Fellow, he is the author of 'The Brink', published by Harper Perennial (2015). He wrote the script for 'Kill Your Darlings', with the film's director John Krokidas, which debuted at the Sundance Film Festival and won the International Days Prize at the Venice Film Festival. A graduate of Yale and the Iowa Writers' Workshop, he teaches at Cornell University.