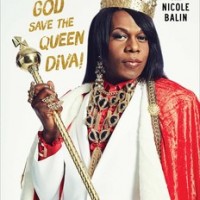 From the eponymous star of the most popular reality show in Fuse TV’s history, this no-holds-barred memoir tells the story of a gay, self-proclaimed mama’s boy who exploded onto the formerly underground Bounce music scene—a hip-hop subgenre—and found acceptance, healing, self-expression, and stardom!

As the “undisputed ambassador” of the energetic, New Orleans-based Bounce movement, Big Freedia isn’t afraid to twerk, wiggle, and shake her way to self-confidence, and is encouraging her fans to do the same. In her engrossing memoir, Big Freedia tells the inside story of her path to fame, the peaks and valleys of her personal life, and the liberation that Bounce music brings to herself and every one of her fans who is searching for freedom.

Big Freedia immediately pulls us into the relationship between her personal life and her career as an artist; being a “twerking sissy” is not just a job, she says, but a salvation. A place to find solace. To escape from the battles she faced growing up in the worst neighborhood in New Orleans. To deal with losing loved ones to the violence on the streets, drug overdoses, and jail. To survive hurricane Katrina by living on her roof for two days with three adults and a child. To grapple with the difficulties and celebrate the joys of living.

February 1913: seventeen-year-old Leda, clutching a suitcase and her father’s cherished violin, leaves her small Italian village for a new home (and husband) halfway across the world in Argentina. Upon her arrival in Buenos Aires, Leda is shocked to find that her bridegroom has been killed. Unable to fathom the idea of returning home, she remains in this unfamiliar city, living in a commune, without friends or family, on the brink of destitution. She finally acts on a passion she has kept secret for years: mastering the violin. Leda is seduced by the music that underscores life in the city: tango, born from lower-class immigrant voices, now the illicit, scandalous dance of brothels and cabarets. Leda knows, however, that she can never play in public as a woman, so she cuts off her hair, binds her breasts, and, as a young man, joins a troupe of musicians bent on bringing tango into the salons of high society. As time progresses, the lines between Leda and her disguise will begin to blur, and feelings that she has long kept suppressed will reveal themselves, jeopardizing not only her music career but her life itself.of royalty and athletic champions, and a pre-Stonewall figure who never buckled to convention. Henrietta’s audacious physicality made her unforgettable in her own time, and her ecstatic and at times harrowing story brings to life an essential chapter in America’s twentieth century.

Talk is a hilariously irreverent and racy testament to dialogue: the gossip, questioning, analysis, arguments, and revelations that make up our closest friendships. It’s the summer of 1965 and Emily, Vincent, and Marsha are at the beach. All three are ambitious and artistic; all are hovering around thirty; and all are deeply and mercilessly invested in analyzing themselves and everyone around them. The friends discuss sex, shrinks, psychedelics, sculpture, and S and M in an ongoing dialogue where anything goes and no topic is off limits. Talk is the result of these conversations, recorded by Linda Rosenkrantz and transformed into a novel whose form and content put it well ahead of its time. Controversial upon its first publication in 1968, Talk remains fresh, lascivious, and laugh-out-loud funny nearly fifty years later.

This month, NYU Press is releasing Not Gay: Sex between Straight White Men by Jane Ward, a provocative exploration of male sexual identity:

A straight white girl can kiss a girl, like it, and still call herself straight—her boyfriend may even encourage her. But can straight white guys experience the same easy sexual fluidity, or would kissing a guy just mean that they are really gay? Not Gay thrusts deep into a world where straight guy-on-guy action is not a myth but a reality: there’s fraternity and military hazing rituals, where new recruits are made to grab each other’s penises and stick fingers up their fellow members’ anuses; online personal ads, where straight men seek other straight men to masturbate with; and, last but not least, the long and clandestine history of straight men frequenting public restrooms for sexual encounters with other men. For Jane Ward, these sexual practices reveal a unique social space where straight white men can—and do—have sex with other straight white men; in fact, she argues, to do so reaffirms rather than challenges their gender and racial identity.

In novelist Lidia Yuknavitch’s new book The Small Backs of Children (HarperCollins) the intersections between war, the media, love, and sex are cannily explored:

With the flash of a camera, one girl’s life is shattered, and a host of others altered forever. . .

In a war-torn village in Eastern Europe, an American photographer captures a heart-stopping image: a young girl flying toward the lens, fleeing a fiery explosion that has engulfed her home and family. The image wins acclaim and prizes, becoming an icon for millions—and a subject of obsession for one writer, the photographer’s best friend, who has suffered a devastating tragedy of her own.

As the writer plunges into a suicidal depression, her filmmaker husband enlists several friends, including a fearless bisexual poet and an ingenuous performance artist, to save her by rescuing the unknown girl and bringing her to the United States. And yet, as their plot unfolds, everything we know about the story comes into question: What does the writer really want? Who is controlling the action? And what will happen when these two worlds—east and west, real and virtual—collide?

In the new thriller Price of Honor (Bold Strokes Books), author Radclyffe weaves a riveting tale of duty and betrayal:

Honor and duty are not always black and white—and when self-styled patriots take up arms against the government, the price of honor may be a life.

Blair Powell and Jane Graves have much in common and even more that sets them apart in an invisible battle raging on home soil. Blair’s father is the president of the United States, while Jane’s is a domestic terrorist bent on bringing about a new world order at the expense of the present one. When Blair takes to the campaign trial to support her father’s re-election, Cameron Roberts and the newest members of Blair’s security detail must protect the president and his daughter from foes bent on revenge. Jane and her secret ally within the president’s inner circle vow to destroy them all, at any cost.