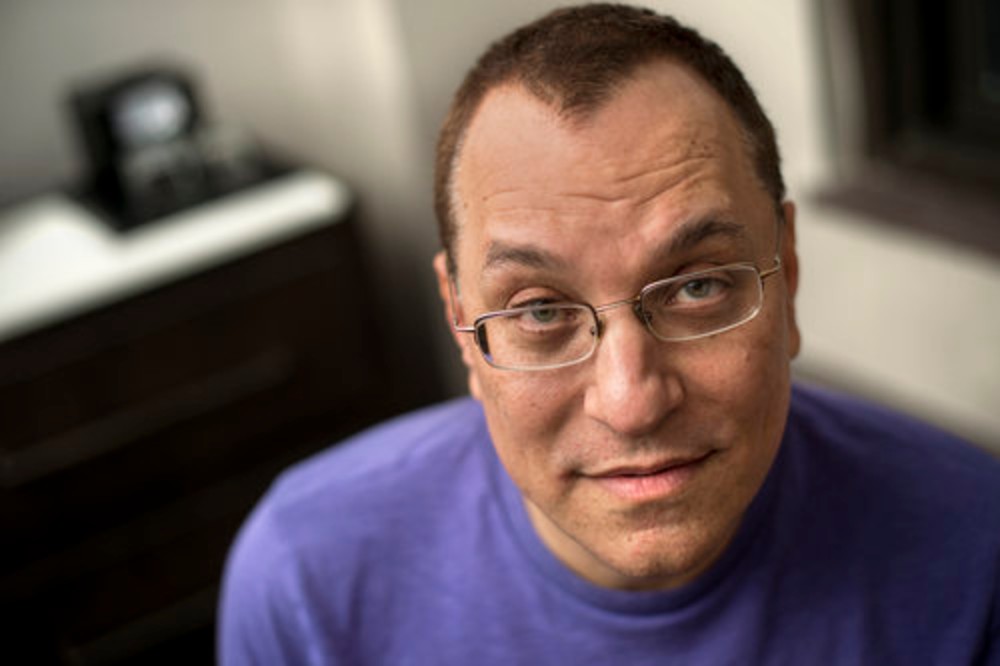 Kenny Fries: On How Being Disabled Influences His Work, Gay Pride, and Writing about Identity

Kenny Fries: On How Being Disabled Influences His Work, Gay Pride, and Writing about Identity

“To me, a culture of disability is very important. And I think that my books contribute to that culture. I think that there are many things that unite people with disabilities. Unfortunately, most of these unifying factors are things that relate to oppression, exclusion, and marginalization–the barriers we face.”

As a writer, Kenny Fries puts identities under scrutiny. Gay, disabled and Jewish: “An ex calls it the Nazi Trifecta, three marks under Nazism,” Kenny Fries explains–only to segue into another dark joke about the lack of accessibility in concentration camps. As Fries recounts in Body, Remember: A Memoir, he was born in 1960 with twisted and shorter-than-usual legs, his father fainted when his maternal grandmother screamed, “My daughter gave birth to a freak!” Once they got over the shock, their son was the first disabled student admitted to a regular Brooklyn, New York elementary school. Later, Fries studied literature and theater, creative writing and playwriting, and has published memoirs, essays, poetry, plays as well as contributions to anthologies. He also wrote his first opera libretto, a commission from Houston Grand Opera. Fries currently lives in Berlin and teaches in the MFA in Creative Writing Program at Goddard College.

You often write autobiographically/about yourself. How important to your work is identity?

In the beginning, initially, I consciously wrote about identity. In my first nonfiction book, Body, Remember, different identities that intersected were a big topic. Starting with that, I tried to look at something bigger: the relationship between body and memory–something that, in my case personally relates to being gay, Jewish and disabled. In my other books, identity is not that central an aspect. But it is there–because of course my perspective, where I come from, informs what I write. In The History of My Shoes and the Evolution of Darwin’s Theory I write about Darwin from the perspective of a person with a disability. In In the Province of the Gods (forthcoming), I write about Japan and about how my disability informs and influences my understanding of what happens there. In my current book, I return to identity when I write about my experiences in Germany.

When it comes to these three identities, disability gets singled out, put into focus again and again. Is the identity “person with a disability” your favorite identity?

It’s never singled out. I’m always caught in the middle between all of them, after all. When I’m among people with disabilities, I’m often the only gay one. When I’m among gay people, I hardly ever see someone with a disability. There are lots of Jews in the U.S., but people like me don’t have high profile, aren’t a common sight. Interestingly, early on I was often seen as a gay writer. Now, I think I am seen more as a writer with a disability instead. But I just see myself as a writer.

Especially in the U.S., people always get labeled, are pigeonholed, put into a niche right away. But because back then, there wasn’t a niche for disability, I was put into the gay niche. To me, these are all labels that are given to me, assigned to me from outside. They relate to me, they have to do with me, but they don’t define me.

Let’s talk about bodies. You have said that in Body, Remember, you write about the relationship between body and memory. What do you mean by that?

Lots of my memories get triggered through the body. When I was in college, for example, I could not visit any friends who worked in the chemistry lab. My body had an extreme reaction because the smell of chemicals immediately brought me back to the memories of my hospital stays when I was a kid. If I look at my scars, or if others touch them, it brings back memories of the times when I had surgeries. In one of my poems,“Body Language,”this is turned into a metaphor: “What is a scar if not the memory of a once open wound?”

What made you decide to come to Germany, of all places, for your research for your newest book?

When I got my visa, my dad asked incredulously, “Will they let you in?” [Fries laughs]. One reason why I wanted to come to Berlin was this very topic: memory and remembrance. Here, there is so much memory and remembrance, not only of the Nazi era, but also of the GDR. I am interested in societies that, after destruction, after a war, need to reinvent themselves. What gets remembered, what doesn’t, what gets blurred, swept away, what gets concealed, hidden, what gets torn down, demolished?

Much earlier, before I came to Germany, when I met Germans I wanted to ask them right away, “What did your parents and grandparents do during the war?“ These questions are still there, but they are not center stage anymore. I find it interesting when Germans themselves approach the topic. My question is: How is it for people with a disability to live in a country where they historically were seen as expendable? I interviewed one woman with a disability and asked her when she first learned about the T4 program and the Nazi era killings of disabled people. She said that hearing this made her fight for her rights. Some people with a disability have told me that when they protest lack of accessibility they’ve been told: “Back then, you would have been gassed.” I, too, sometimes catch glimpses of reactions on the street that to me seem like hostility, which I relate to the wish to have me exterminated.

You took part in several identity politics movements. What identity is the easiest to fight for?

Being Jewish has always been easiest. I grew up in New York, where I was surrounded by many Jewish people. That was my community. Dealing with being gay was inevitable. I had to confront living as a sexual being. I only dealt with my disability identity after I came out. Until five years ago I did not use a wheelchair, and until I was twenty-eight, I had never used a cane. There were some things I couldn’t do but I did not see that as a problem. Even though I am small in stature, I have never felt disabled. Of course, though, I had internalized all the devaluing messages of society: from doctors, from my family, from my brother. But that only really became clear to me when I went to college. The gay scene, on the other hand, is obsessed with appearance and attractiveness. There, my compensation has always been to be sharp, and sometimes to entertain them. In this way I get the spotlight away from the disability.

I never particularly liked Pride Parades. I’m not really someone who climbs on the barricades or collects signatures for petitions. Personally, my kind of political action is to be anywhere where my presence disturbs the status quo–whether that place is a bank, a university, a public toilet, a gay bar or any place else. I’m kind of a walking political statement, even though I’m not always aware of that.

I know that Pride Parades are important: the opposite of pride is shame. To me, though, they seem to be a kind of overcompensation. I went when I was young, but by now they don’t interest me anymore. To me, the parades were more like a party than an occasion to get over shame. Shame never completely vanishes. Instead, over time, you learn to control your shame bit by bit. I still experience many uncomfortable situations, but now I am much more aware of what is happening in these situations.

Disability Pride Parades, as you know, are controversial. People say: “Disabilites bring pain and suffering–how can you celebrate them? Can you be proud of a disability?”

That’s a skewed criticism. The disability is not the problem: Just because someone has a proud and confident attitude towards their disability, it doesn’t mean that they enjoy pain and suffering. After all, there are various ways to deal with pain. And why should you even take pride in anything, after all? I have been battling depression for a long time and I’ve been on medication for decades. Am I proud to suffer from depression? Of course not. But depression is a part of me. I can’t remove that part from myself. Who decides what part of a personality is important to oneself–and what part isn’t? People say it’s cool to ride a motorcycle but it’s uncool to ride a wheelchair. Who decides that?

The Disability Pride Parades celebrate a disability culture. But there, too, people object. “A lesbian and gay culture–this can be understood. When they attend the Pride parties, they can meet partners. But a culture of disability? Don’t their respective disabilities vary too much from each other?”

To me, a culture of disability is very important. And I think that my books contribute to that culture. I think that there are many things that unite people with disabilities. Unfortunately, most of these unifying factors are things that relate to oppression, exclusion, and marginalization–the barriers we face. But then, isn’t that the same as with other “minority cultures”? Yes, we don’t have our own language, and we aren’t using our own language per se. But we people with disabilities share common experiences. Even though these experiences are often only that we all are constantly measured by something that we are not.

Work by Kenny Fries: In the Province of the Gods (forthcoming); The Memory Stone,” Houston Grand Opera (2013); The History of My Shoes and the Evolution of Darwin‘s Theory (2007); Desert Walking: Poems (2000), Body, Remember: A Memoir

This interview was originally published in German in Mondkalb, and has been translated into English by Stefan Mesch. Stefan Mesch is a journalist, writer, and translator from Heidelberg. He writes for Die Zeit and the Berlin Tagesspiegel, translates for Marvel Comics and the Goethe- Institute. He recently completed the first German edition of Amy Hempel’s Reasons to Live (Luxbooks, Wiesbaden, 2015).

Rebecca Maskos is a German freelance journalist and psychologist. She co- coordinates a project on violence against women with disabilities and writes on subjects such as the disability rights movement, disability identity, ableism, empowerment, gender and bioethics. She is co-founder and editor of Mondkalb, and www.Leidmedien.de, a critically acclaimed website on language and disability