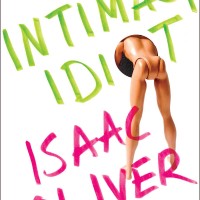 Though Intimacy Idiot is billed as Isaac Oliver’s collection of personal essays, the book contains more than just standard autobiographical sketches. Together with these essays are tossed-off anecdotes, humorous asides, “recipes” for lonely singles, overheard subway conversations, and love poems to strangers. The collection conveys how the author, alongside his fellow New York City denizens, both does and doesn’t connect with strangers in public or in bedrooms. With a multitude of short pieces (the table of contents is three pages), there are more hits than misses.

Readers are introduced to Isaac through the first piece, “Online Dating Profile.” It’s a basic understanding of who Isaac is, or of how he presents himself. It explains that he is “Tilda Swinton Caucasian,” that he doesn’t have kids except for “Chipotle babies” and that a typical Friday night is him with “wine in mouth, dick in hand and hope in heart.” One gets a deeper understanding of his general worldview in the next piece, “How I Didn’t Learn to Drive,” where he explains how he became a resident of the city and why he prefers hooking up over “formal” dating.

The book is at its best in the slightly longer pieces, in which he balances the punchlines with pathos and genuine emotion. Some examples include “The Dolphin from Dubai,” in which he realizes that hooking up with a furry enthusiast is not as weird as he initially thought; “The Woodsman,” in which he tries to find sex during an artists’ residency in the middle of the woods of New Hampshire; and “Big Ben,” in which an argument about a condom with a hookup turns into Isaac confronting his own tendency to treat his current existence as dress rehearsal for a life he has yet to live.

Oliver also demonstrates his eye for observational comedy in the various “Subway Diary” entries. In these, he captures the best of New York’s cast of characters talking and going about their business. Similarly, in “Judged,” he skillfully portrays the personalities and interactions of his fellow jurors during a stint of jury duty.

Where Oliver tends to falter is when he goes broad. In some cases, that means that pieces are just ruminations on a topic—such as marriage, traveling or his childhood—with very little if any narrative thread pulling the reader through. For example, “Some Scattered Thoughts on Los Angeles, Las Vegas, and Marion, Massachusetts” is just that. Other times, he’s dealing with well-worn topics like weird hookup situations, working in customer service or the general weirdness of New York. Thankfully, these pieces are elevated by his writing and wordplay. In discussing how to navigate a party, Oliver explains, “If the attractive person is indeed talking to you and seems interested, genuine, or even flirtatious, you’re probably going to get murdered. You could do worse; an ax in the back is still penetration.” The weaker pieces are still worth reading if only for similarly great lines.

These stories, anecdotes and pieces originate from an old blog of Oliver’s. They have evolved from there and been performed at storytelling events and the author’s solo show of the same name. One has to wonder if the book isn’t not always successful due to the translation to page. Pieces in this book, like the “Love Poems,” may work better when seen and heard.

Ultimately, a reader’s overall enjoyment of this book will hinge on what they expect the book to be and do. Intimacy Idiot succeeds as a collection of social and sexual misadventures of a twenty-something gay man in New York. However, in a number of the pieces, Oliver proves that he is not much of an intimacy idiot when it comes to his writing, as he can achieve great moments of poignancy. While a satisfying book, it also may be hard not to imagine a version of it with more heft, in which the author allows himself to dive deeper into stories, expand the better pieces and jettison other less successful pieces.

Despite the aforementioned criticisms, the book is a great presentation of Oliver’s excellent comedy and writing abilities. It can easily be likened to a spread of hors d’oeuvres best enjoyed by picking the pieces you like. It may leave you wanting more from Oliver, which is not such a bad problem for him to have, but you’ll be ready and hungry for his next book.