‘A Little Life’ by Hanya Yanagihara

‘A Little Life’ by Hanya Yanagihara 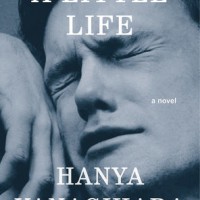 Hanya Yanagihara’s second novel, A Little Life, has become one of the most talked about books of 2015 and with good reason. What begins as an atmospheric bildungsroman set in a mythically ahistorical New York City morphs by slow degrees into a harrowing meditation on otherness and the redemptive possibilities of survival and friendship.

The novel opens on a close-knit set of friends from an elite New England college who have settled in New York City to chase their dreams. Willem Ragnarsson, the handsome and emotionally starved child of Wyoming ranchers, waits tables while auditioning for plays. The gay only-son of Haitian immigrants, Jean-Baptiste Marion, known to his friends as J.B., focuses his implacable self-loathing on breaking into the art world. Malcolm Irvine, who was born to wealthy, interracial parents on Manhattan’s Upper East Side, cannot decide if he is straight or gay and pursues a career in architecture to impress his self-made father. And then there is Jude, exquisitely beautiful and partially disabled by a mysterious, long-ago accident. He is so protective of his inner life that even his three closest friends cannot claim to know him well. It is Jude’s story—the traumas of his hopelessly benighted childhood and the insidious ways that they continue their assault on his mind and body–around which the vast bulk of Yanagihara’s 700-plus page novel so effortlessly turns.

Our first real glimpse into Jude’s inner turmoil comes when Willem awakes one night in the apartment they share to find him bleeding from a deep cut on his arm. Jude insists it was an accident, but his personal physician confides to Willem that his friend has a long history of secret cutting, one that occasionally escalates to the point of disaster. The cutting becomes a source of anger and confusion for Willem, who cannot fathom the impulse to self-harm, and Jude’s silence on the matter offers nothing in the way of consolation.

What Jude cannot articulate to his closest friend comes to the reader in a series of flashbacks to a decidedly gothic childhood. Jude was abandoned in a trash bin as an infant and spent his childhood in a monastery with monks who treated his precociousness with a regime of increasingly brutal punishments. He eventually escaped to the care of a trusted adult who subjected him to years of sexual servitude. On and on, Jude’s trials went, until the harrowing ordeal that left his body permanently broken. Now, only cutting keeps the memories at bay, quiets the “hyenas” that forever lurk at the edges of his mind, and wards off his feeling of being too dirty and damaged to deserve the love of his friends and the success he eventually enjoys as renowned litigator.

The cutting episodes are frequent and Yanagihara’s rendering is unflinching as she describes how Jude is eventually forced to saw through a carapace of scar tissue to get the relief that he craves. Even those irritated by our current “trigger warning” culture may find themselves wishing they had been better prepared for the horrors Jude visits upon his increasingly fragile body, and for the author’s unwillingness to let the reader off with a light under the bathroom door and a merciful fade to black.

The genius of A Little Life is the way it entices readers to adopt Jude’s habits of mind, to read through the hideousness for the moments of exquisite human loveliness that routinely puncture his suffering. One of Jude’s law school mentors, an older man whose interest seems prurient at first, gives him the home and family he always craved. As Jude’s mobility deteriorates, an acquaintance offers him a sweet deal on a SoHo loft roomy enough to accommodate a wheelchair. And his bond with Willem, which endures decades of both sacrifice and unheard of good fortune, seems to offer Jude’s best hope for finally closing the door on his past.

But redemption is not among the features of the darkly ethereal world Yanagihara has imaged. True, her New York sometimes feels like a zero gravity zone where young men soar to extravagant heights with a mere kick of the foot. Yet money and fame do very little to fill the gaps in the hands these four were dealt at birth. Willem turns movie star with a respectable mix of blockbusters and indie fare to his credit, but he never slips the ghost of the profoundly disabled brother he left behind in Wyoming. J.B.’s first gallery showing propels him to instant art world acclaim, but celebrity only fires his suspicion that Jude and Willem would hold him dearer if only he were white. In some of the book’s best scenes, he wields his resentment like a cudgel before spiraling into a stew of dangerous acquaintances and crystal meth. Malcolm, who eventually marries a woman and settles into life as a globetrotting architect, comes closest to contentment. His curse is to be the least compelling of the four, so much so that his tragic and abrupt exit from the tale leaves hardly a ripple.

Indeed, some reviews have cited the thinness of Yanagihara’s lesser characters as a flaw in an otherwise impressive novel. But it stands to reason that a character like Malcolm, to whom a place of relative prominence in the world was vouchsafed at birth, would flatten out in the logic of a work so preoccupied with the psychic toll of difference. In this world, characters shimmer and burn in proportion to their deviation from the norm. And in Jude St. Francis, Yanagihara may have just given literature its most vivid and extreme queer protagonist.

Jude’s predicament is the inverse of his 19th Century forerunners—think of the protagonists of Dickens and Charlotte Brontë, young people reviled by the world only to be redeemed by eleventh hour revelations of noble birth or the ministrations of wellborn lovers. The world allows Jude to rise without these interventions–he never learns who his real parents were, and when love comes like a miracle in the form of a beautiful man who can accept his scars and his silence about the past, Jude finds himself more vulnerable to his hyenas than ever before. If cutting allows him to turn a presentable face to the world, then the damage he will inflict upon his body to endure sex with his lover is more horrible by orders of magnitude.

“You were made for this,” Jude is told by one of his childhood abusers. He can never bring himself to doubt it, no matter how fortune turns to compensate him for his suffering. His difference is innate, a lonely cell into which no one else can see or follow. It is a state of affairs that leaves little room for hope. But Yanagihara’s novel pulses with something far more necessary:  the opportunity to look upon the world with an unflinching compassion for things unknowable and unseen.

‘The Cosmopolitans’ by Sarah Schulman
'Oscar of Between: A Memoir of Identity and Ideas' by Betsy Warland
‘The Narrow Door: A Memoir of Friendship’ by Paul Lisicky