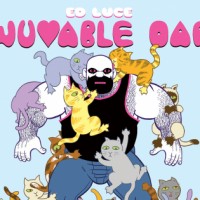 Wuvable Oaf is the tale of a big, hairy, gay ex-wrestler’s search for love in San Francisco. Oaf, formerly known as the wrestler Goteblüd, is a gentle giant, a kitten lover who makes toys stuffed with his abundant body hair for an adopted boy, and who harbors a passion for The Smiths.

Oaf’s heart skips a beat when he meets Eiffel, the diminutive but commanding singer for the band Ejaculoid, which melds metal, queercore and disco into its own unique blast of musical chaos.  But the road to passion for the two intrepid lovers is filled with many roadblocks, including enemy bands, family histories and many ex-lovers, including other band members.

Paralleling the human’s story played out in the clubs and streets of San Francisco is the feline drama in Oaf’s Home For Wayward Kittens Who are Really Cute & Need Lotsa Love. Star players include Pavel, a special needs kitty with horrible hallucinations, and the thugged-out street cat Santino.

I first discovered Wuvable Oaf as floppy comics, around 2007. Ed Luce’s enormous talent as a writer, artist and graphic artist was apparent from the beginning. His hatch marked hirsute heroes, both human and feline, morphed into an indie product line that, besides comics, included T-shirts, dolls and panties. His multiple stories were all captivating yet sometimes hard to follow and remember because of the time gap between issues.

I was so relieved to finally get this whole tale as a bound graphic novel. Now, all the stories make sense, and anything that puzzles a reader about a character can be explained by checking the character’s bios in the back pages. (Eiffel got his name because he had French hippie parents, e.g.!) There are so many tantalizing details to tickle readers fancies, from the chest-hairy end papers to all the visual in-jokes tucked into these panels. Can you spot Ned Flanders and Zangief? Prince? Betty (sans Veronica)? Pris from Blade Runner? The androgynous protagonist of Liquid Sky?

With such a wide range of characters, it’s no wonder that Luce’s stories have also found a diverse readership that includes rock ‘n’ roll dudes, women and kitty lovers. While there’s no question that this is a queer love story, its crossover reach and Fantagraphics’ sponsorship means that Luce’s work is punching through the “gay comics ghetto” barricades that have isolated queer creators in the past from reaching a wider readership. Share it with friends and gift yourself: this graphic novel is the best treat anyone can get, short of a basket of kittens!

The Banal and the Profane: Phillip B. Williams
'Riot Lung' by Leah Horlick
First Kiss: On Watching Luca Guadagnino’s 'Call Me By Your Name'