‘The Battle of Versailles: The Night American Fashion Stumbled Into the Spotlight and Made History’ by Robin Givhan

‘The Battle of Versailles: The Night American Fashion Stumbled Into the Spotlight and Made History’ by Robin Givhan 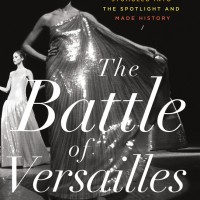 The evening of Wednesday, November 28, 1973, as guests began arriving at Versailles, the palace glowed under a full moon and through a scrim of light snow—the first dusting of the season. Red uniformed, saber-wielding gendarmes flanked the gilded palace gates, along with some four hundred footmen in eighteenth-century white powdered wigs and livery. Marie-Hélène de Rothschild, dressed in green, ostrich-trimmed gown by Yves Saint Laurent and with solitary diamonds pinned in her thick hair greeted guests; brushing kisses on the cheeks of the French and offering handshakes to the Americans. […] the pews of Versailles overflowed with the burdens of history, the dignity of the state, the power of provenance and of extraordinarily dusty money. It was a bit like being in the Cathedral of the Holy Order of Social Stratification. —The Battle of Versailles, Robin Givhan

In The Battle of Versailles, Robin Givhan—former fashion reporter for The Washington Post and the first fashion writer to win the Pulitzer Prize—tells a story of an event which, when first conceived, may have appeared both stratospherically high-end and gossamer-light, but which proved to have surprising depth and a continuing resonance and importance for our times. She chronicles how five American designers— Bill Blass, Oscar de la Renta, Anne Klein, Halston and Stephen Burrows—went up against five giants of French couture—Yves Saint Laurent, Hubert de Givenchy, Pierre Cardin, Emanuel Ungaro and Marc Bohan of Christian Dior, in front of a select wealthy and titled audience at an event designed to raise money to help restore the French royal palace.

With the ubiquity and speed of technology and social media, a span of forty years can, at times, seem more like four hundred. One of the astonishments of “Le Grand Divertissement à Versailles” is how little is known about it. Something like this “battle” today would be Instagrammed, Tweeted and Facebooked instantly, with TMZ providing exclusive video highlights of the backstage feuds and various cable channels competing for live coverage of the “red carpet arrivals” at the Palace. Amazingly, in 1973, few photographers were allowed at the event, and Liza Minnelli, fresh from winning the Oscar for Cabaret and invited to perform at Versailles by her friend Halston, had a “no television” clause in her contract.

Givhan begins Battle with capsule histories of the strictly regulated world of haute couture in Paris, and of the now-lost world of jet-setting women married to wealthy husbands whose style set the standard for international society. Her story encapsulates the change from the practice of U.S. manufacturers copying French designs for women on these shores to designers turning their backs on French influences completely, and the power shift in fashion from retailers like Bergdorf Goodman and Saks Fifth Avenue, which sold items with only the store’s names on them, to the actual designers themselves.

Her story brings details the power and influence of Eleanor Lambert, a relentless promoter of American fashion (and her own public relations clients), creator of the Coty Award and “Fashion Press Week,” and one of the founders of the Council of Fashion Designers of America. Givhan also gives brief but illuminating overviews of each of the eight designers at the Versailles, which is especially enlightening for the least known of them, Stephen Burrows. An immensely talented African-American designer who drew inspiration from his stays on Fire Island and his multicultural, multiracial, multisexual “family” of friends, Burrows was more focused on his work than on building a brand or creating a “name” for himself.

Battle also shows how fashion was tied to issues of social change in both the U.S. and France in the late 1960s and ‘70s. The Americans at Versailles prominently featured black models at a time when fashion hoped to show how progressive it was, leading the way forward toward greater racial harmony. That many of these relatively inexperienced models, such as Pat Cleveland and the striking Billie Blair, were extremely theatrical and exciting in an age when most models were merely ‘hangers’ for the clothes was a major factor in the success of the Americans. “It was the beginning of voguing,” declares Burrows friend and co-choreographer Charles Tracy. “They went crazy giving attitude.” The fact that they were also less expensive to book for the event than more established white models didn’t hurt the designer’s modest bottom line, either.

Because this is a book about the fashion world, it also contains some gossip, of course. Both the French and the male American designers disliked having Anne Klein as part of the show, because of both sexism and her more “low end” “working clothes” designs for women, which blazed the trail for the then unheard-of idea of “separates.” There are vignettes of how wonderfully Liza Minnelli treated the fresh young models and of a very pregnant Donna Karan working backstage for Klein. The designers haggled over the order of the show, with Bill Blass reneging on a promise to Oscar de la Renta at the last minute. Constant attention was needed by the highly self-regarding Halston, who began referring to himself in the third person after becoming the wealthy toast of Studio 54 and declared two days before the show, “Halston is leaving!”

After all the froth and frayed nerves, shade and triumph of the Americans at Versailles, Givhan’s final chapters slow down to take a valuable and serious look at its meaning and aftermath, exploring what happened to each designer, their companies and their models, and how the night at Versailles changed the way models looked and walked the runway—at least temporarily. For while the Americans and their models won the Battle, not all of them managed to win the war.

After a slightly repetitive start (is there a need for both a prologue and an introduction?), The Battle of Versailles becomes engrossing, entertaining and, finally, gripping. Givhan is exceptional in her final chapters on the diversity, or lack thereof, in the fashion industry since 1973. The changes wrought by the designers and American fashion industry since Versailles make the reader realize, contrary to frequent accusations of frivolity, how serious the world of fashion can be.

The Battle of Versailles: The Night American Fashion Stumbled Into the Spotlight and Made History
By Robin Givhan
Flatiron Books
Hardcover, 9781250052902, 310 pp.
March 2015

‘Opacity and the Closet: Queer Tactics in Foucault, Barthes, and Warhol’ By Nicholas De Villiers
'Red-Inked Retablos' by Rigoberto González
'When I Was a Twin' by Michael Klein