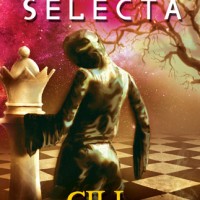 If one is to bring order to the turmoil portrayed in Soul Selecta, one might start by breaking down this sometimes strange, sometimes whimsical paranormal tale into its three separate parts. It starts with a prologue, a curious tale with some promise, set in Sappho’s Seminary for Artistic Young Ladies in 654 BC. The unexpected death of a young student leaves us hanging, suspended in time as if dangling from a golden thread high above the earth, while the screams of the young woman find their echo down the ages.

As if we’ve climbed aboard The Whip—the carnival ride that uses our body weight against us, sending us hurling in a new direction at every turn—we’re thrust into a contemporary coming-out story. Not a traditional lesbian romance, the two soulmates in this section don’t even live on the same continent. Jesse is a typical American kid, while Norrie is a sensitive young musician from Ireland. However, just as we settle into this story, the unexpected happens, throwing us off-kilter once again.

Finally, as if we’ve gone directly from The Whip without a stop at the Cotton Candy booth, we climb aboard a roller coaster to be pulled uphill in an even cadence of clicks only to plummet to the depths, heads spinning, stomachs churning, to find ourselves in the Elysian Fields with the Soul Selector, the Gods and Goddesses of Olympus, and Death himself. When we arrive in Elysium, we find that all is not well, and a different kind of chaos ensues. As if that isn’t enough, we discover that Death might just be the most affable character in the story. He has charm, flash and an unmistakable fashion sense. He also has a rather severe speech impediment and a burning desire to stick to the “wooles” (rules).

Meeting a gregarious Death isn’t the only part of this story that gets topsy-turvy. Using the carnival analogy again, we might find ourselves riding the Caterpillar, speeding in one simple forward motion with a few gentle dips and climbs, then swaying back. However, when the Caterpillar cover encloses us, we quickly become disoriented, unable to tell up from down, nor love from a misplaced indignation. That’s when we meet Athena, the Goddess of Love, whom we would expect to be sweet and likeable yet is far from that stereotype. Instead, she’s demanding and sports a rather unpleasant personality.

Although I’m not a big proponent of corporal punishment for kids, Athena’s son, Eros, really needs to be taken over someone’s knee, and eventually, Death really does him one better. Finally, the Soul Selector, who is Athena’s direct report, has a difficult time handling her charges, but frankly, she doesn’t really seem well suited for her job. When she manages to get a little help from some unlikely associates, they work to pull off the magic trick of the century, and when they do, the pieces start to fall into place.

It’s difficult to give too much detail about this story without risking giving away too much of the plot, but suffice it to say, Gill McKnight is a master at using humor in places you’d never expect to find it, and takes us on an intriguing ride, akin to Mr. Toad’s Wild Ride, assigning some very creative attributions to characters, especially those in the land of the Gods. As to the disparate stories, the ending really does fit them together like an intricate puzzle, forming a ring that circles back onto itself through time, clearing the chaos and allowing us to make the connections.

For something vastly different, yet not without a story that keeps the spiral always moving toward a quixotic end, take a chance on Soul Selecta, where even the peculiar title has impact. Prepare to meet the unexpected in this plot that folds back on itself and brings with it more than one element of surprise.