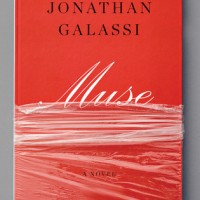 How does an intrepid young(ish) book reviewer with even scrap of self-preservation left go about panning a book written by the president and publisher of Farrar, Straus and Giroux and live to tell the tale? Luckily, I wont have to find out anytime soon, because in his debut novel, Muse (Knopf), Jonathan Galassi does a superb job of offering a meticulously observed peek behind the curtain of the book publishing world, complete with an eclectic cast of outsized characters.

Our guide to this expertly crafted, blind item-ready version of New York publishing is Paul Dukach, the young, gay protégé of infamous-yet-beloved raconteur Homer Stern, who finds himself drawn professionally to his boss’s longtime adversary, Sterling Wainwright. Paul’s true claim to fame, however, is knowing everything there is to know about the mythic writer Ida Perkins, the rare commercially successful poet who’s racked up nearly as many marriages as she has bestsellers. She also happens to be the subject of a decades-long feud between Stern and Wainwright, who both deeply desire her simultaneously as an artist and as a woman.

Margaret Atwood wrote that, “The truth about knights comes suddenly clear: the maidens were only an excuse. The dragon was the real business.” In the case of the trio of male protagonists in Muse, Perkins is both the maiden and dragon. She’s a blank slate onto which they can project their various fantasies, be they romantic, professional, or artistic, and the prize they’ll fight each other for to the death.

Which is what makes it so rewarding, for this reader at least, when Paul gets the chance to meet Ida in person and she turns out to be a much more messy and complicated human being than any of her fans or suitors ever allowed her to be in their minds. It’s a classic case of “never meet your heroes,” but in a way that made her character all the more interesting and real.

With all that in mind, Muse may not be for everyone. Those who enjoy vibrant characters that leap off the page will be thrilled, but readers who appreciate a more plot-driven narrative will likely be somewhat disappointed. Similarly, those who don’t find the mechanics of book publishing to be engrossing may find themselves nodding along with an exasperated Paul, who laments at one point of writers and publishers alike, “They were all intolerable, each of them worse than the next. They expected him to be as wrapped up in their stories as they themselves were.”

And yet even in this, the author is winking knowingly at his readers, his true audience of die-hard bibliophiles and those who desperately need an insider’s look at a venerated—and declining—American industry now that Mad Men is off the air. No matter which camp you fall into, all must acknowledge that Galassi has not only written what he knows, but has pulled off the rare feat of also making it entertaining for the rest of us.