Jonathan Galassi: On Publishing, Poetry vs. Prose, and Meeting Your Literary Heroes

Jonathan Galassi: On Publishing, Poetry vs. Prose, and Meeting Your Literary Heroes 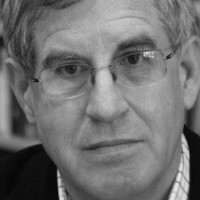 “I chose to write about publishing because it’s the world I know best, and because I wanted to leave a record of a way of working that really is gone now.”

Muse (Knopf) may be Jonathan Galassi’s first novel, but he’s far from a literary outsider. As the president and publisher of Farrar, Straus and Giroux and an accomplished poet and translator in his own right, he knows a thing or two—or one million—about the world of publishing.

Indeed, in his new book, he offers an insider’s view of the industry and the outsized real-life characters that gravitate toward it. The story follows Paul Dukach, who is the world’s foremost expert on the headline-making writer Ida Perkins, who herself is the subject of a bitter rivalry between Paul’s boss, Homer Stern, and his mentor, Sterling Wainwright. When Paul finally gets the chance to meet his poet-hero in person, he’s forced to reexamine everything he thinks he knows about her and the relationship between publishers and writers.

Galassi was gracious enough to take a moment to chat via email about his leap into novel-writing, the intersection of publishing and writing, queer characters, and the imaginary lives we create for the artists we most admire.

This is your debut novel, but you’ve had quite a bit of your poetry and translations published in the past—and there is some original poetry in the book. Why did you decide to make the jump to prose, and how was that transition for you?

I did it as a challenge, and to have fun, to see what it might be like to work in this other medium that I’ve worked so closely in with others. And at this point, it was now or never. I found that it is entirely another world, one of great depths and pitfalls, yet one that fascinates me—and now, I’m working on another novel. It seems to me that poems describe states of mind and open them up. Fiction seems to be about moving, about making transitions from one state of mind or situation to another.

As someone who works on both sides of the publisher/author divide, how has life as a publisher intersected with and informed your life as a writer?

I chose to write about publishing because it’s the world I know best, and because I wanted to leave a record of a way of working that really is gone now. So publishing was my situation, the background for my story. But as a writer, I’m just like everyone else, trying to write convincingly and accurately about people—the human comedy. I try not to wear my editor’s hat when I’m writing because it can be inhibiting. And my own editor refers to me as “a real author,” which is not exactly a compliment. So I must be succeeding to a degree.

Being that you’re so established in the publishing world, what was it like to be published by someone else?

I’ve found it very instructive. It helped me think about things from the author’s point of view—and also to see that there are many ways of doing the editor’s and publisher’s jobs. And I’ve found the team that I’ve worked on the book at Knopf to be tremendously good at what they do. I’ve been watching like a hawk and plan to adopt some of their methods.

I want to talk for a minute about Ida Perkins. I found her fascinating, both as an idealized woman who functions as a screen onto which the male characters, both gay and straight, can project their fantasies—be they romantic, professional, literary or otherwise—and also as a more messy, complicated character once she gets to speak for herself. Was there anyone in particular on whom you modeled Ida, and how did you go about crafting her larger-than-life persona?

Ida is a total invention. She is larger than life; some say she represents literature itself—the ideal that all the publishers in the book want to possess. Some readers think she’s over the top, but she’s supposed to be, particularly to the young, wide-eyed ingénue Paul Dukach, who looks up to her. Muse is a kind of counterfactual; it presents a world where poetry is big business. It’s a poet’s revenge fantasy of sorts. It oscillates between psychological realism (I hope) and a slightly potted alternative literary history. Ida also represents freedom—erotic, aesthetic and emotional. She lives her life without looking back, or rather seems to. We learn later on that this isn’t quite true. As the book progresses, Paul—the observing, feeling center of the book—comes to see her in a more rounded way. As he grows up to be her size, she comes down to be more his.

To portray Ida, I simply let my imagination run. Some of her traits are borrowed from people I know and love, but her core, her essence, is all her own. Someone pointed out that Maurice Sendak has a character named Ida who is his alter ego, and that the name may be inspired by the Freudian id. That could be. Someone asked if Ida is me. I don’t think so, though I do think she represents an ideal of freedom and potential that everyone in the book somehow aspires to.

You incorporate quite a few queer characters and plotlines into Muse. Why was it important for you to include theses themes, and do you think this diversity is reflective of the publishing world in real life?

I hope that the reader comes away from the book feeling that the many loves in Muse are reflective of a multifarious reality, which is as true in publishing as anywhere—and that they are all equally valid as to their sources and their meaning for the characters who experience them. Is Muse a queer book? I do hope it posits an equal-opportunity vision of attraction and love. I think that is the queerest thing of all, much more than any hetero- or homosexual hegemony—and that is much closer to reality. Mark Morris’ dancers combine and separate and recombine in all the ways they possibly can. It’s taken for granted in Morris’ universe. I love that, and I hope Muse exhibits some of that freedom.

Are there any artists, past or present, you would be too afraid to meet, for fear that they might fail to live up to your lofty expectations?

I think at the heart of your question lies the very real disjunction between the interior life that gets represented on the page and the lived life that sometimes seems to bear no relation to that at all. Ida herself doesn’t like talking about her work, and I’ve known many great writers who have been like this. Their work is private until it’s public. As James Merrill famously and justly put it, Elizabeth Bishop, one of our greatest modern writers, carried out “a lifelong impersonation of an ordinary woman”—that is, except for the acuity and depth of her observations, which were one great source that flowed into her poetry as well as into her conversation.

I would be fascinated to meet any of my literary heroes and heroines. Meeting the great Eugenio Montale was an unforgettable experience for me. But I wouldn’t be surprised if they turned out to be shy or, as Merrill put it, “ordinary,” though I would be disappointed if they turned out to be excessively narcissistic, or venal, or just plain mean, which is also always a possibility. Ida Perkins herself was no saint.  But do we need to know artists as people? Great writers turn into their work; they “become their admirers,” as Auden said about Yeats. In some sense, their work must represent what’s best in them. The ways in which they may have failed as human beings, while part of the story, get mitigated and smoothed out, at least to a large degree, by the enduring meaningfulness of what they wrote. Was William Shakespeare a nice guy? You can imagine any answer you want to this question, and you may even find evidence for it in his work. But it doesn’t really matter who Shakespeare may have been in the flesh. He’s Shakespeare the writer for us, plain and simple—our greatest. Basta.

Laurie Weeks: Making Magic Out of the Real
'Diaghilev: A Life' by Sjeng Scheijen
'Not My Bag' by Sina Grace