‘Dangerous When Wet’ by Jamie Brickhouse

‘Dangerous When Wet’ by Jamie Brickhouse 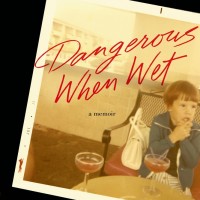 Dangerous When Wet is a fabulous new memoir about a man who has it all–a great job in publishing, a longtime boyfriend, fun friends and a caring family. But Brickhouse has some serious life challenges too, including addictions, HIV and a mother who has “the split personality of Auntie Mame and Mama Rose.”

Still, to Brickhouse, Mama Jean and adults in general represent a world of sophistication, and how better to access that world than by drinking like they do? He starts early, taking his first sip at around age five and getting drunk for the first time as a young teen.

Like his alcoholism, his gayness is foreshadowed in youth: He enjoys recreating Ann-Margret’s famous fall off a stage, writing a book report on Mommie Dearest and mimicking his mother on the phone. He even manages to snag his first boyfriend while still in elementary school. Eventually, Brickhouse must drop him, though, because sweet little Eric may be a “sissy,” according to one teacher. His description of that time is heartbreaking and filled with regret.

About a decade after he’s forced to dump his first love, he loses his virginity to two men at once (!), an experience that slightly sours after he discovers the men have mistaken him for a whore. “Alternately flattered and insulted,”  he returns the money. He looks back on it in a beautifully descriptive, beautifully bittersweet paragraph:

I always imagine them back in Kansas, boasting to their friends about the copper-headed Lolita they picked up at a pool in Acapulco and nearly lost on the beach, but who couldn’t be bought–or at least wouldn’t take a tip. And every time they tell that story, they point to a baby grand piano lousy with a collection of silver-framed photos. In the center is a picture of a metal-mouthed kid brazenly smiling in the Mexican sun as he stands in the surf of an Acapulco beach–forever virginal, forever fifteen.

Later on, sex will become another addiction. And though his boyfriend is okay with him having it outside the relationship, he’s always supposed to come home. Sadly, it’s a rule he just can’t seem to follow. Below he writes about the pathetic aftermath of a drunken one-night stand with a Columbian man from New Jersey:

I could see him back in Paterson boasting to his visiting mamacita about the copper-headed lush he’d picked up at a trendy club in Manhattan. When he tells that story, he points to the top of that dorm-room refrigerator lousy with a collection of black-and-white photos in drugstore frames. In the center is a picture not of a bright-eyed, ripe teen, but of a puffy-faced man, wanly smiling in the gray of day as he stands in front of the Great Falls of the Passaic River–forever forlorn, forever hungover.

If this all sounds terribly sad, keep in mind that Dangerous When Wet is equally hysterical. For example, of his suicide attempt, Brickhouse writes, “The prescription on the pill bottle read Take as needed. I followed directions.”

It’s hard to criticize a book as well-written as this one, but I have to say it would have been stronger with less Mama Jean. Yes, she’s a character all right, but few of her antics are interesting enough to merit inclusion. I also wondered if there was more to the story of why Brickhouse became an addict. Then again, perhaps it was just a bad mix of childhood curiosity and the wrong genetic makeup, a case of something that seemed at times manageable snowballing out of control. Addiction is sneaky like that, yet Dangerous When Wet shows us that with humor, hard work, support and hope, it can be conquered.

'Indecent Advances: A Hidden History of True Crime and Prejudice Before Stonewall' by James Polchin
'Listening to the Dead' by George Seaton
'The Man in the Gray Flannel Skirt' by Jon-Jon Goulian