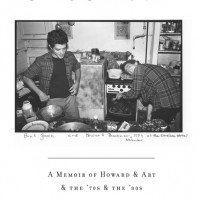 When I started writing down my memories, I was contemplating recording the fabulous times of my youth, the golden age of promiscuity, when I came to New York and everything was sex and poetry and La Bohème for suburban American kids arriving to create their identities, and do drugs, and get laid. In a way, it was a response to the curiosity of young gay guys, who often ask me some version of, “Oh, tell us what it was like in the seventies.” Again, because this present for them seems smashed up against the past. “Well,” I begin in a portentous tone, “back in the day, there were no cell phones…No online hookup sites, either, just bars….No one seemed to have a job….” Eventually I get around to telling the good stuff.

In his new memoir Smash Cut, novelist (Scary Kisses) and biographer (City Poet: The Life and Times of Frank O’Hara) Brad Gooch recounts his experiences in New York City during the turbulent ’70s and ’80s. With his relationship with filmmaker Howard Brookner as the focus, Gooch covers a dizzying array of events and a constellation of notable characters in retelling his life with Brookner, from their first date in 1978 to Howard’s death at age 34 in 1989.

Interspersed with photos, drawings and other documents, the memoir uses the titular “smash cut” film device of “splicing one image or event up against another totally unrelated image or event” to tell its story. The first section of the book begins as the Columbia University doctoral student and fledgling writer Gooch meets Brookner, then in the midst of making a documentary about William S. Burroughs, at a time when, “we were all trying strenuously to walk on the wild side.”

After being encouraged to become a model, the memoir’s second section covers Gooch’s brief career in high fashion. The “glamour” of modeling turns out to be a combination of dazzle and boredom, such as being part of a Parisian shoot where the young Ana Wintour decides to redesign the entire set up–which takes hours, and the strangely closeted nature of the fashion world at that time, where models couldn’t be seen as “too gay.” Also complicating Gooch’s sojourns are negotiating issues of monogamy with Howard, the trials and jealousies of trying to maintain a long distance relationship, and struggling with Brookner’s increasing drug use.

Gooch movingly, beautifully–and occasionally hilariously–describes his life with Howard, from a drag party in their apartment to the summer the couple spent in an abandoned cottage on Fire Island that seals their love. One or both of the couple also seems to be in the right place at the right time to meet people like Andy and the rest of “Planet Warhol,” the soon-to-be famous Madonna, or an up-and-coming Robert Mapplethorpe who shoots promotional photographs of Gooch for his modeling portfolio, although “Robert and I were both pretty clueless about fashion photography […]” After the photographer, “plied me with coke until the moment when I’d finally forgotten all about the modeling pictures […] in the final portrait I look like a glazed-over victim of child abuse, dressed for a nice dinner, with a jagged werewolf shadow cast behind […]”

At times, Gooch hesitates, puts off telling a detail or a story, most often about some sexual or drug-related transgression, as exploring the “wild side” in the ‘70s and ‘80s meant trips to the infamous Mineshaft bar, speed, cocaine and heroin as well as clubbing at the Paradise Garage and visiting with Chelsea Hotel neighbor Virgil Thompson. Gooch gets over these hesitations and presses on, telling almost all. Oddly, however, what’s often missing in Smash Cut is not detail, for there is a good deal of that, but the difficult to put ones finger on ‘flavor’ of the times. What did it feel like to be in these places, live at these times? However, if, as Tolstoy famously wrote “All happy families are alike; each unhappy family is unhappy in its own way,” Brad Gooch has given us a fine example of what a happy gay couple holding onto each other through tumultuous and finally tragic times looks like.