‘Petticoats and Promises’ by Penelope Friday

‘Petticoats and Promises’ by Penelope Friday 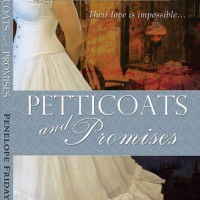 Serena Coleridge comes from a wealthy family in the town of Winterton, somewhere outside of London. By the year 1815, when Petticoats and Promises opens, she’s grown into a teenager alongside the beautiful Clara Battersley, her best friend and neighbor, who comes from a similar background with one exception—Clara’s mother is a woman of title.

The two families are drawn together by business arrangements and the friendship of the two fathers. Their mothers, however, are two very different people and only seem to tolerate each other for the sake of their families. Serena’s parents are very loving toward her and altruistic in their attitudes toward workers and neighbors. Clara’s parents are more distant, and her mother is a social climber focused on propriety, appearances and her own position in the community. Because of the two young women’s lifelong friendship, they spend as much time as possible together, although Clara’s mother is somewhat disdainful of Serena, considering her inferior because her family isn’t aristocratic but instead earned their wealth through financial endeavors.

Each of the adults in these relationships are set to put into motion reactions to events that will be the young women’s undoing. As they reach maturity, Serena and Clara prepare for their first “season,” the time when they are presented at the London royal court. However, their personal lives take a turn because of the investment misfortunes of Serena’s father. Plans change abruptly, leaving the girls with bitter disappointment.

During this same time, Clara and Serena are moving from friendship, as friendly touches and kisses on the cheek turn into torrid expressions of adoration and mutual pleasure. The two express their love and devotion, making promises of faithfulness that will later be called into question. But for now, the two look for clandestine opportunities to spend time with each other—until the next dramatic change in the story.

After a time, Serena’s family’s fortunes recover enough for them to right themselves. This and the kindness of an aunt living in London allow her to spend some time there, immersing herself in the life of the upper class, with balls and events to amuse and entertain. Eventually, though, Serena finds it all very tedious and longs for the serenity of Winterson, deciding in the end to escape back to her hometown. When she gets there, what she finds out devastates her almost completely.

All these turns of events and influences of people cause Serena and Clara to walk very different paths. Serena grieves as she comes to understand that Clara seems to have forgotten all the expressions of love and faithfulness between them and has moved on with her life, and Serena plunges into depression and bitterness from which it may be difficult to recover.

Petticoats and Promises is a tale well-told in the first person, giving us Serena’s perspective on the events. The Regency Period can be a challenging one to keep interesting, as it entails portraying a time when life moved at a much slower pace and appearances and station in life made all the difference. To help enliven the action, Friday has given us some interesting supporting characters in the persons of Miss Kate Smythe and Mr. Feverley, who form a triad of friendship with Serena and for most of the story are her support, her respite and, in Kate’s case, her voice of reason.

The tension that develops between the two main characters is also well devised and keeps us wondering what will happen next, and if these two young women are ever to overcome the barriers between them to find happiness, whether separately or together. Told in the refreshingly simple yet eloquent voice of the deeply passionate and emotive Serena, this tale quickly becomes a surprising page-turner. It’s a tale that will keep the reader’s interest from beginning to end, engaging him/her in the period and the personalities of the times.

‘Moment of Weakness’ by KG MacGregor
'The Repercussions' by Catherine Hall
'American Honor Killings: Desire and Rage Among Men' by David McConnell