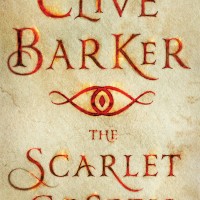 Horror fans rejoice! In his new novel The Scarlet Gospels (St. Martin’s Press), horror maestro Clive Barker returns to showcase some of his most popular creations.

The Scarlet Gospels takes readers back many years to the early days of two of Barker’s most iconic characters in a battle of good and evil as old as time: The long-beleaguered detective Harry D’Amour, investigator of all supernatural, magical, and malevolent crimes faces off against his formidable, and intensely evil rival, Pinhead, the priest of hell. Barker devotees have been waiting for The Scarlet Gospels with bated breath for years, and it’s everything they’ve begged for and more.

Bloody, terrifying, and brilliantly complex, fans and newcomers alike will not be disappointed by the epic, visionary tale that is The Scarlet Gospels. Barker’s horror will make your worst nightmares seem like bedtime stories. The Gospels are coming. Are you ready?

A gripping novel of culture clash and murder: as summer draws to a close, a small Long Island town is gripped by a series of mysterious deaths—and one young man, a loner taken in by a local, tries to piece together the crimes before his own time runs out.

Orient is an isolated town on the north fork of Long Island, its future as a historic village newly threatened by the arrival of wealthy transplants from Manhattan—many of them artists. One late summer morning, the body of a local caretaker is found in the open water; the same day, a monstrous animal corpse is found on the beach, presumed a casualty from a nearby research lab. With rumors flying, eyes turn to Mills Chevern—a tumbleweed orphan newly arrived in town from the west with no ties and a hazy history. As the deaths continue and fear in town escalates, Mills is enlisted by Beth, an Orient native in retreat from Manhattan, to help her uncover the truth. With the clock ticking, Mills and Beth struggle to find answers, faced with a killer they may not be able to outsmart.

Life isn’t easy, and in Neil Smith’s new novel, neither is the afterlife. In Boo (Vintage Books), author Neil Smith provides an inspired and imaginative snapshot of adolescent trauma.

It is the first week of school in 1979, and Oliver “Boo” Dalrymple—ghostly pale eighth grader; aspiring scientist; social pariah—is standing next to his locker, reciting the periodic table. The next thing he knows, he finds himself lying in a strange bed in a strange land. He is a new resident of a place called Town—an afterlife exclusively for thirteen-year-olds. Soon Boo is joined by Johnny Henzel, a fellow classmate, who brings with him a piece of surprising news about the circumstances of the boys’ deaths.

In Town, there are no trees or animals, just endless rows of redbrick dormitories surrounded by unscalable walls. No one grows or ages, but everyone arrives just slightly altered from who he or she was before. To Boo’s great surprise, the qualities that made him an outcast at home win him friends; and he finds himself capable of a joy he has never experienced. But there is a darker side to life after death—and as Boo and Johnny attempt to learn what happened that fateful day, they discover a disturbing truth that will have profound repercussions for both of them.

Hilarious and heartwarming, poignant and profound, Boo is a unique look at the bonds of friendship in what is, ultimately, a book about finding your place in the world—be it this one, or the next. 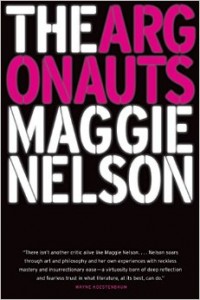 Maggie Nelson’s The Argonauts is a genre-bending memoir, a work of “autotheory” offering fresh, fierce, and timely thinking about desire, identity, and the limitations and possibilities of love and language. At its center is a romance: the story of the author’s relationship with artist Harry Dodge. This story, which includes the author’s account of falling in love with Dodge, who is fluidly gendered, as well as her journey to and through a pregnancy, offers a firsthand account of the complexities and joys of (queer) family-making.

Writing in the spirit of public intellectuals like Susan Sontag and Roland Barthes, Nelson binds her personal experience to a rigorous exploration of what iconic theorists have said about sexuality, gender, and the vexed institutions of marriage and childrearing. Nelson’s insistence on radical individual freedom and the value of caretaking becomes the rallying cry for this thoughtful, unabashed, uncompromising book.

Everything that mattered to Frances Moriarty was left behind in famine-ravaged Ireland, including the love of her life. Beset with grief and guilt, she is scraping out a shadowy existence as a New York shoeshine boy when word spreads like wildfire: gold nuggets line the riverbeds of California.

Eager to stake a claim, Frances boldly sets out on the overland trek to California’s gold fields, praying that her journey will lead her to riches—and a place a woman like her can call her own.
Rich with historic detail and steeped in the secret passion of women-loving-women, Hilary McCollum’s debut novel is an epic story of love lost and found in a daring life.

In hart island, the poet narrator walks and works in the East Village of Manhattan navigating the day to day needs and desires of a community, an organization, a changing neighborhood, as well as her own. The poem, which begins after she discovers the existence of an appropriated, politically walled-off potter’s field/prison, proposes that others are not figurative or metaphorical, but are literal, material—that alterity can be both a limit and radiance.

This month also sees the release of a new fiction titles from Kirsty Logan, Shawn Syms and John Keene.