Jeffrey Round: On Becoming a Mystery Writer

Jeffrey Round: On Becoming a Mystery Writer 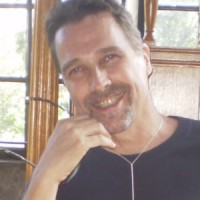 “I’m an inveterate wanderer and snoop [….] Whether I’m on a bike or in a car, I stick my nose in places that most people avoid just to see what curiosities they hold, especially at night.”

At 11:10 a.m., Lambda-award-winning Canadian author Jeffrey Round is starting work later than usual.

“I found it exhausting being around all those rich people,” Round says with good humor, perhaps influenced by Goy. “Normally I would be writing by now.”

Round thought today was Friday and was rushing for an appointment before he realized this was Thursday. Thus, he has time for this interview, armed with coffee on this cold, grey, miserable early April morning. This time of morning, though, may have other significance.

“For those who study magic symbols, 11:10 is binary code, a number consisting solely of ones and zeroes,” Round explains. “Binary codes are related to the Chinese divination system known as I Ching, and the Christian theology of creation springing out of nothing.”

Luck is only part of the reason for his successful Dan Sharp mystery series set in the heart of Toronto. In The Jade Butterfly, the third installment, Sharp, a gay, single, missing persons investigator, attempts to locate his Taiwanese client’s sister. She vanished in the 1989 Tiananmen Square Protests. Like the first two Sharp novels, Lake on the Mountain, published in 2012, and Pumpkin Eater (2014), the protagonist navigates rough situations and red herrings. However, a fiercer sexuality infuses Jade. The hero likes men with a dark edge, and yields to temptation. Several hot scenes ensue.

Round admits that in his past writing, he may have depicted relationships as a substitute for the real thing. Lately, though, his own love life has changed.

“The inspiration has been closer to home, in a relationship that started over a year ago and has continued to grow since then,” Round says. “And it was certainly worth waiting for. So, the professor has left the laboratory and begun to study love and emotion in close-up firsthand. What a revelation!”

Meanwhile, the fictional Sharp also juggles a precarious and platonic relationship with Kendra, with whom he is raising their teen son, Ked, and seeks advice from his confidante, Donny. The protagonist also copes with post-traumatic stress disorder (PTSD) and a drinking problem. Dan Sharp’s mysteries are a mix of grit, gay Toronto life and found family.

“I’m an inveterate wanderer and snoop,” Round says. “Whether I’m on a bike or in a car, I stick my nose in places that most people avoid just to see what curiosities they hold, especially at night.”

While driving around on such a night, Round witnessed a real-life event that inspired an arson case in Pumpkin Eater.

“I saw smoke issuing from a rooming house,” Round recalls. “People had gathered to watch, but no one seemed to be calling the fire department. (This was just before cell phones were common.) I remember the eerie feeling of standing there watching people moving their belongings out and going back in for more as the blaze got bigger. It was as if we were too mesmerized to move.”

“I had just got back in my car to find a pay phone booth when I heard sirens in the distance.”

Mining such adventures for material, Round enjoyed writing the first Sharp novel and his matter-of-fact queerness.

“I never set out to be a mystery writer,” admits Round. “The success of the series has been a bit of a surprise to me. I loved it from the start, but that was no guarantee others would. I like to span genres, but don’t like to be confined to any particular one.”

Round’s doubts about the series’ appeal were soon dispelled. Lake on The Mountain won the Lambda Literary Award in the Gay Mystery category on June 3, 2013.

“Winning the Lambda sealed Dan Sharp’s fate to a certain degree, ensuring that he would be making return appearances,” Round says.

Just last week, Round passed off on the editing process for the fourth Sharp book, After the Horses. His current success, though, took years of hard work, not to mention hard lessons.

Imagine Round in his twenties, suffering from heart break. He travelled overseas and worked as a model, an experience which proved inspirational for his first novel, A Cage of Bones. Cage is an immensely satisfying bildungsromann or coming-of-age book of a protagonist coming out of the closet and descending into the Hades of the modelling world. In his youthful exuberance, though, Round drafted a 1,000-page manuscript, which he spent three years pitching unsuccessfully to Canadian publishers. So Round pared down the manuscript to a more reasonable 300 pages. The trimming worked. In less than three months, Round piqued the interest of a British and American publisher.

With that accomplishment behind him, he tucked in and wrote two more books. One occurs in the late 1980’s and would have been one of the first novels examining the early HIV/AIDS epidemic. Round tried to publish these two books unsuccessfully for a decade.

“In those ten years, I spent learning the industry to discover why the second (and third) books I had written were not selling,” Round says. “Largely, that word is marketing. Not that the books were un-market-worthy, but simply that I wasn’t targeting the right market for them.”

“I had wonderful poetry, short stories, and what I thought were two brilliant novels, but I couldn’t sell them.”

He also matured as writer and looked at marketability.

Round’s next source of inspiration was the most unlikely of places—the Jacuzzi. While vacationing with his then-boyfriend in Provincetown, Massachusetts in 2003, Round was getting out of a Jacuzzi. He saw someone spying on them with binoculars. On a whimsy, Round flashed the Peeping Tom. Yet that image struck him. Returning home, Round hammered out the draft of The P-Town Murders in eighteen days, just to see if he could do it.

“It was only then that I got it into my head to write what the market wanted, in this case a funny, gay mystery,” Round says. “I knew when I was writing it that it would sell, and sell quickly, and I was right.”

Round’s next effort was decidedly more literary. He decided to write about a Canadian photographer who flees her dysfunctional family life to document the Bosnian War. The result, The Honey Locust, was published by Cormorant Books in fall 2009 to acclaim.

Round, like his creations, likes variety, and then created Dan Sharp, a character with a tough upbringing at the hands of an alcoholic dad.

“I enjoy exploring Dan’s emotional life,” Round says. “He is always ready for a good romantic interlude. He is also a rescuer of strays, having been one himself, so can barely resist the temptation when a good-looking man comes his way asking to be saved, but I never intended to turn these books into mysteries with romances on the side, as opposed to mysteries with realistic characters who have personal lives.”

Round’s professional workplace also resembles Dan Sharp’s. His office features plentiful  calming green (Martha Stewart’s Corn Husk) with a striped cloth pull-down blind. Three enlarged posters of his book covers hang from the wall behind him. He doesn’t like to see them while working. On the wall he faces hang a three-month erasable calendar and a black-and-white photo of Jack Kerouac in a Columbia University football uniform.

Round admits being attracted to the Beat Writer’s good looks, but also the “hints of turbulence underlying his expression”, and the fact that Kerouac was diagnosed as having a “schizoid personality” while serving in the Navy.

“You never know who is going to make a success as a writer,” Round says.” Certainly, that photo gives no indication of his having a writerly inclination.”

Hanging on the same wall is a piece of wood from a tree stump outside the church that James Dean attended in Fairmount, Indiana (which Round visited for the 50th anniversary of Dean’s death in 2005) and a stone from the crash site where Dean died just outside Cholame, California.

He also tends to work to music. This morning, Round started with the Talking Heads’ Fear of Music. As the interview has progressed, he has graduated to Luigi Cherubini’s first string quartet.

With such totemic items and music at hand, Round is currently sketching out the fifth and sixth Dan Sharp novels.

“I’m also working on a prequel to the Bradford Fairfax comic mystery series, Havana Club, and a heavy literary drama about an English tutor’s affair with a gay Muslim,” Round says.

He is having a recovery coffee during this particular exchange, but also likes java while writing.

“Always,” Round says. “It’s Turkish coffee, meaning a fine grind quickly brought to a boil and poured into a cup along with all the grounds.”

“The stronger, the better.”

Certainly, this is an odd phrasing to apply to his writing process, but Round’s description could describe a Dan Sharp book.