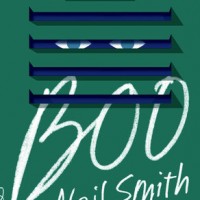 It would be easy to write off Neil Smith’s debut novel Boo as a young adult novel that’s been schlepped onto the shelves of contemporary grownup fiction. There are several red flags that you, as a reader, have been trained to believe are characteristics of books specifically for teens and those coming of age. For one, the story follows a thirteen-year-old named Oliver Dalrymple, nicknamed “Boo” due to his pale complexion and wiry hair. Boo is a science weirdo who has suddenly died in the halls of a school where he was ruthlessly bullied. In addition to the thirteen-year-old narrator and the bullying narrative, Boo finds himself “reborn” into a version of heaven—a kid purgatory where every kid who also died at the age of thirteen resides in a small town where the quality of life is painfully mediocre and you remain there for another lifetime staying the physical age of thirteen until your awaited redeath. The imaginative setting and magical realism littered throughout cite more reasons why you might say Boo is for young adults. Though the juvenility of the first fifty pages or so is a bit of a feat, you come to find that this novel’s thematic questions—a terrifying high-wire act—are huger than huge. Smith ventures to convey a reality about bullying and mental health that is far braver than any you’ve ever read, as Boo is a spelunking adventure deep into the caves of life, death, good, evil, mortality, loss and grief.

In this thirteen-year-old limbo called “Town,” Boo, at first, struggles to figure out how he ended up there. He is an unreliable narrator who notifies you at the beginning of the book that he has died of some spontaneous fatal heart palpitation caused by his own excitement at trying to recall every element on periodic table. Boo, as you might have guessed, is a bit of a nerd with a brain that fails to respond to most social cues and has a funny way of trying to use science and logic to make sense of anything that comes his way. The voice of the scary-smart weird teen, in tandem with the narrative setting, leads you to think this is some crossover between The Lovely Bones and Extremely Loud and Incredibly Close. Though the book exhibits qualities of both, it takes a quick turn to Lord of the Flies when you come to find out that Boo did not die of a heart complication. Several weeks after his arrival at Town, Boo finds Johnny, a classmate and complicated bully who has also passed into this strange afterlife. Johnny informs Boo that they both died after being murdered in a school shooting. What’s even more devastating, they come to find, is that their murderer (who they’ve deemed “Gunboy”) killed himself and also resides somewhere in Town.

The story sets off when Johnny seeks to exact revenge on Gunboy. It is an altogether troubling plot to bear witness to, and Smith is aware of the challenges he faces in addressing the reality of school shootings, the prevalence of bullying and the mental and emotional health of kids who’ve just barely become teens. Gradually, the story falls into a dystopian narrative in which the supposed God of Town, who they call “Zig,” has abandoned them; Town’s law enforcement, the “Do-Gooders,” becomes increasingly backwards, and a few kids who come together in a small, revolutionary group are left to their own devices.

Boo is a very fast-paced, original and inventive story, with a foundation in emotional intelligence, honesty and flaw. When Johnny expresses that now, in quasi-heaven, he wants to kill his murderer, he says it’s “the same as when you have to shoot a horse when it breaks a leg.” When thirteen-year-olds are trying to navigate the complexities of good versus evil, we find their explanations to be simple yet profound. “‘What Gunboy has is worse than a broken leg.’ He tapped his fingers against his temple. ‘He has a broken brain.’”

The entire book is written in very short chapters, each labeled with an element from the periodic table as if the novel were a scientific countdown to your own death. The mental unrest of the story’s protagonists unravels in your very hands, using shock and violence to juxtapose the innocence and naïveté of these kids. The narrative is told as if Boo is trying to explain the afterlife to his parents, like an ongoing letter home that will never really reach home. Though the questions Smith ventures to answer don’t really have an answer, the construction of plot is unlike any you’ve ever seen. If you’re able to suspend your belief for the sake of strong characters, you’ll find that the very devastating thoughts of this thirteen-year-old are shockingly intimate, relatable and, in their own way, true. Case in point, this quote: “I picture you, Father and Mother, in your living room. You are building a shelf on the wall. It will be the stage on which my urn will stand. You do not want to let me go. In any case, do we ever really let anyone go. Even those who are no longer with us are still with us.”

'Parade' by Michael Graves
'A Failure to Communicate' by S. Andrea Allen
‘The Unreal Life of Sergey Nabokov’ by Paul Russell