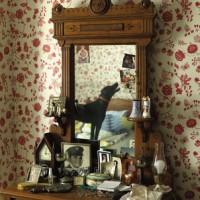 Much of Bettyville is concerned with the past. Betty, George’s mother, struggles with a body and mind that don’t act like they used to, a frustrating challenge for the independent spirit. George, a keen observer and storyteller, ruminates on the history of his family and uses the present situation as a backdrop to the story of his own life. The community of Paris, Missouri is described as if it were an ailing family member; fondly remembered homes and stores are being replaced by meth labs and Walmarts. Together, it all creates a sense of limbo—of a world existing in both past and present, so much so that it’s jarring when George checks Facebook or has plans to see The Master. Then, the present world intrudes, bringing additional problems that neither of them have time to deal with.

The reader enters the world of Bettyville with George having been at his mother’s house for some time. His stay has extended beyond his original plans of just visiting for her ninety-first birthday. No longer able to drive legally and less able to take care of herself, Betty now requires George as a caretaker. Betty resists assisted living, and George is reluctant to return to New York. Mother and son find themselves navigating this new living situation airing frustrations and fears, doing their best to survive haircut appointments and an incident with a deer, and incorporating a dog into the household.

Hodgman tells his life story alongside scenes and situations of the present. As a boy, he prefers mimicking Barbra Streisand in Funny Girl over sports and fishing. It is not until Betty discovers issues of The Advocate hidden under his mattress that a gap of understanding between mother and son is created. Young George struggles with romance, sex and his connection to the larger gay community throughout his education, whether it be an unspoken attraction in high school, working up the courage to attend a Gay People’s Alliance meeting during university, or attempting relationships as a young adult.

After graduate school, George ends up in New York working in book and magazine publishing at notable places like Simon and Schuster, Vanity Fair, Henry Holt and Houghton Mifflin. During his professional life in the city, he is witness to his gay friends and acquaintances’ suffering and anger during the first waves of the AIDS epidemic. Further on in his life, he struggles with drug addiction, the high stress and tensions of work, and his father’s death.

To amend a quote from Little Edie in Grey Gardens: “It’s [sometimes] difficult to keep the line between the past and the present.” This is a central theme of Bettyville, a memoir that travels through three time periods: the present time, George’s life, and occasional glimpses into the family history before his time. This makes the book hard to follow at moments, but it is only a notable problem towards the end when George’s journey through life brings him back to Paris and the present.

The book is ruminative; George’s thoughts, memories and feelings are at the center. The author admits to being closed off and deflecting with wisecracks and jokes. However, he also has an eye for stunning observations, and his long career as an editor serves him well as a writer. His expertise with the written word is evident in his prose, of which one example is this panoramic view of a spring morning in Missouri: “[…] the rivers rise and the rolling fields stretching acres and acres, miles and miles, gradually go green as the farmers fret over the wet ground, wondering when it will be dry enough to disc and get the crops out. In the mornings, old women wander through wet grass, bending with dirty hands over jonquils or bursts of peonies, rising to inspect children walking to school or hang summer clothes to air in the breeze.” With lyrical diction does such a scene unfold in front of this reader’s eyes.

Hodgman pictures himself as something of an outsider in his relationship to his family, to his hometown neighborhood, and to the gay community at large, and this point of view allows for observations about the past that are equally fond as they are insightful. It is this perspective that also allows the book to be emotional without turning sentimental.

Were this a novel written by an uncreative author, the book would end with George starting a relationship, with a doctor perhaps, and his mother having a full coming of terms with his homosexuality. Instead, Hodgman allows readers into journeys through a long year and the past, where completion of small tasks are worthy of celebration and years-long silences are bridged with few, albeit warm, words and small actions. George’s and Betty’s lives throughout Bettyville are lived with the ideas that the past is either slipping away or full of complicated emotions, and that “the present is trouble enough.” This is why, when George finds contentment with the present and can think of the future—of his future, it is all the hope necessary for him to continue.