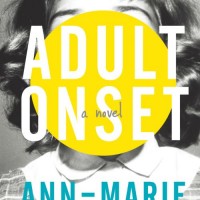 Voyeuristic close-ups, the escalation of fear in the reader, repeated, almost painful, moments of anticipation—Hitchcock would be applauding Adult Onset, Ann-Marie MacDonald’s third novel. Here’s the portrait of one week in the life of a lesbian in her forties, a successful writer, who much to her surprise has become a stay-at-home mother with two small children. “She helped change the world to the point where it-got-better enough for her to be here now at her own kitchen table with her own child, legally married to the woman she loves, feeling like a trapped 1950’s housewife.”

And so begins what I thought was going to be an acerbic, hysterical at times, domestic comedy with an edge. Mary Rose pinches her fingers in the child lock on a toilet lid, heroically intervenes (with paper work) to protect their illegal pit-bull from the consequences of chasing the mail carrier, argues with her wife about storing Q-tips in the kitchen, plans play dates, and worries that her mother is going senile. But from the first pages there is a drumbeat from the deep. The phone rings and she can’t answer as she mentally formulates complicated scenarios where a ringing phone means her father (who is healthy) has died and then that her mother has died, and then that they both have. She is felled by physical pain and is sure, despite x-rays to the contrary, that it’s the reoccurrence of a childhood bone disease. Even that first time we see the rage that takes her over to the point of throwing whatever is at hand at whatever is in front of her, I (like Mary Rose) cling to the hope that this is an understandable response to the often asylum-like conditions of a woman raising toddlers. We, Mary Rose and I, want things to be okay, to fall within the range of normal. I wait for the next wry observation so I’ll know that things are fine, just fine. (“I’m cleaning the vinyl stripping on the freezer drawer,” said Mary Rose, “you should see it, it’s ready to sprout.”) But when Mary Rose beats her own head against the wall, it’s not a metaphor or a cliché. It’s violent and ugly.

As funny becomes hysterical and then hysteria, the novel is structured as a mix of her present, chaotic days, old, half-formed memories and family stories of dead babies, ignored illness, and the plots of her young adult novels which turn out to be murky allegories of her own childhood. At first the present, past, and imagined are separate in her mind, but as the week progresses they become equally present and finally indistinguishable to her. She moves through her world in a fog of confusion, despair, and fear and is desperate in her struggle to keep her children safe from real and outlandish dangers and from herself.

I’ve been an Ann Marie MacDonald novel devotee since reading Fall on Your Knees in 1996 and became even more of one when The Way the Crow Flies was published in 2003. All of us MacDonald fans have been waiting. Sure she’s kept busy writing award winning plays and being an actor, but we wanted that next novel. I did caution myself not to expect too much. Even my favorite authors can end up with a relative dud of a book among their list of successes. They get to. It’s okay. And maybe that will happen to MacDonald at some point, but not with this novel. In Adult Onset she once again writes with a precision about the human interior life that is breathless and funny and claustrophobic and thrilling. Here is yet another triumph of a novel.

‘The Hope of Floating Has Carried Us This Far’ by Quintan Ana Wikswo
'No Tea, No Shade: New Writings in Black Queer Studies' Edited by E. Patrick Johnson
'Fun Home: The Musical' Run Extended to November 17th