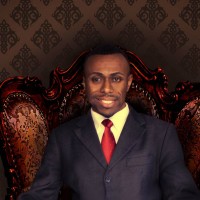 Nathan ‘Seven’ Scott, a beloved LGBT advocate, writer, and multimedia artist has died. Scott, 44, died suddenly on April 20, 2015, in Washington, DC. Cause of death has not yet been released.

Nathan ‘Seven’ Scott, a well-known figure in the Black gay community, noted for his work as a multimedia producer, LGBT advocate, author, and life coach, died suddenly yesterday, in his native Washington, DC. Scott, 44, was a man of many talents, who worked to entertain and uplift the SGL community, and engaged in “mainstream” projects, as well.

[…] Scott became an author in recent years, publishing “My Turn: The Knight Affairs Trilogy”, about a reporter who gets his dream job in New York City, and discovers more than he bargained for. Through it all, however, Scott’s main focus remained the LGBT community. “He hosted things like ‘Greet The Press’ and ‘Gay Black History Month’”, Darryl Hill, chairperson of Jersey City Pride noted, shortly before he died last month.

Details of Scott’s death and funeral arrangements were unavailable pending family notification, but were expected to be revealed shortly.