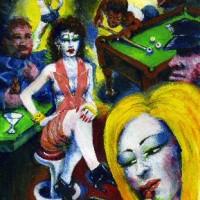 It’s worth taking a moment before we begin to note the long, strange trip Tiny Pieces of Skull has taken en route to publication. Written in 1988, Roz Kaveney had strong support from fellow authors (Kathy Acker and Neil Gaiman among them) and interest from publishers, two of whom pursued the project through the meeting stage only to opt out. If there’s any justice in either life or publishing they’ve been twisted with guilt ever since, both for letting it get away and delaying its arrival for 27 years. Thankfully, it proves more than worth the wait.

Trans protagonist Annabelle Jones is in thrall to new friend Natasha, and easily decides to leave life on the outskirts of London behind for a new start in the US. Upon arrival, and after a quick jaunt through NYC, she finds herself very much alone in the Chicago trans bar scene circa 1978, where fellow patrons read and reject one another and the cops take what they want without consequences. It’s a grim, frightening scene, and yet this novel is consistently delightful.

There’s a clue to this in the alternate title, A Lesson in Manners. While the settings and situations here evoke Hubert Selby Jr., Annabelle, Natasha and their cohort react to things in a manner befitting the work of Jane Austen, with perhaps a dash of Absolutely Fabulous‘s Patsy and Edina thrown in for fun. Natasha’s self-involvement and criticism of Annabelle are relentless, yet she is, in her way, a good friend. Telling Annabelle, “[Y]ou’re such a little whore-in-training, darling. All the right instincts,” is not just plot foreshadowing but high praise from a master.

Rather than a unified minority, the trans community depicted here is a handful of embittered and battling cliques, divided by race, class, and how convincingly or not one presents as one’s intended gender. Yet they share tips and resources, myths and war stories, many about La Mexica, whose head, surgically reshaped, gives the book its title. By the time we meet her she still cuts a striking figure, but industrial silicone that once shored up her ass is now pooling in her ankles and slowing her down. At one point Annabelle must redo her eye makeup depending on which friend she’s visiting and their preference regarding her looks. The freedom to become oneself seems always about to be undone by some social treachery, if not from cruel outsiders than one’s peers, who can stack the bodies of the vanquished to elevate their own social standing.

Annabelle has her breasts done before decamping for the US, and some cisgender friends, unsettled by her commitment and her friendship with the admittedly wicked Natasha, read her the riot act and suggest she not leave. She replies via postcard while on the plane, sending it off from Port Authority “as almost her first American act.” The first card reads in part, “I am a thoroughly bad lot, at last, and I am really enjoying it.” After sending the card, she writes a postscript, which reads in its entirety: “And my tits are real. The opposite of real is imaginary, and I know what imaginary tits are like, and these are not they, not ever again.” Were she in the same position, Lizzy Bennet would have said the same with no less verve and spirit.

Tiny Pieces of Skull delights in its characters and the grit and glamour of their daily lives. Looking back from this vantage point, it’s both heartening to see how much more visible trans people are and striking to find the same dangers still lurking in the shadows. Despite that, perhaps to spite that, the story is still wildly entertaining, and mines a lode of untrammelled joy from every small victory its characters experience. As with Austen, the date it was written doesn’t keep it from being thoroughly modern where it counts.

'Buddha in My Belly' by Brittany K. Fonte
'The More I Owe You' by Michael Sledge
'The Straight State: Sexuality and Citizenship in Twentieth-Century America' by Margot Canaday