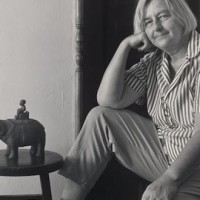 Sydney Abbott, a noted lesbian activist and author, has died. Abbott, 77, was found in her home in Southland, NY, after a devastating fire on the morning of April 15, 2015.

Abbott was a former member of the activist group the Lavender Menace and co-author, with Barbara Love, of the book Sappho Was a Right-on Woman: A Liberated View of Lesbianism (1972).

Abbott was a force for gay women’s rights in New York and beyond since the ’70s, when she helped urge [National Organization of Woman (NOW)] not to ignore lesbian issues.

She had been wheelchair dependent in recent years, and had limited mobility, said Jacqueline Michot Ceballos, a friend for nearly 50 years.

“We were the earliest members of NOW, from day one in New York City, back in 1967,” said Ceballos, a former NOW-New York president and founder of the Veteran Feminists of America.

There were disagreements among the gay and straight members in those early days—famously, Betty Friedan warned about a “Lavender Menace” from the lesbian activists in their movement’s midst. But Abbott was always a mender of rifts within the larger feminist movement.

“She held no grudges and was truly a loving human being,” Ceballos said. “There was no anger whatsoever–It was very, very important to her to make sure we knew that there’s no big difference between us.”

Added VFA president Eleanor Pam, “Sydney Abbott’s contribution to modern feminism cannot be overstated. She was a brilliant, fearless trailblazer, an authentic pioneer in the women revolution and its struggle for equal rights.”

The cause of the fire has yet to be determined, but initial reports state the fire did not appear suspicious.

'Suffered From The Night: Queering Stoker’s Dracula' Edited by Steve Berman
Navigating the Wilderness and Workloads: A Week in the Life of Author Jeanne Thornton
Honors, Awards, and Nominations for LGBT Writers