‘My Avant-Garde Education: A Memoir’ by Bernard Cooper

‘My Avant-Garde Education: A Memoir’ by Bernard Cooper 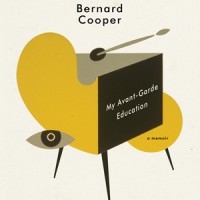 It is easy to assume that My Avant-Garde Education: A Memoir (W.W. Norton & Company) is Bernard Cooper’s autobiography through art. He is after all a critic, artist and educator. While not untrue, it is not the whole story.

The book is a collection of essays and, as with the first chapter in Hilton Als’ celebrated book White Girls, Cooper’s first essay is an all-encompassing long-form meditation that stretches across time, introducing themes of import to the rest of the book. So rich are these first essays that a reader is wise to loop back within them before moving on. Where Als’ opening salvo created a rich fog of emotions, and histories, Cooper’s opening essay could almost be misunderstood as a flatfooted—if not pleasant—walk through sunny California starting in the homogeneity of the 1950s, to the seismic shifts of the ‘80s. The first 179 pages is the tale of a nonconformist postwar life as lived out by a somewhat sensitive boy-cum-man who first tries out New York to study at SVA and then heads back home to attend CalArts in its founding years, and after that to a world he could not imagine waiting for him outside of school. In these pages, we meet parents stuck in American gender roles doing what they can to survive, founding figures in the contemporary art world and—maybe most pleasurably—a cadre of art school classmates who challenge, educate and love Cooper. Attentive to context, Cooper places these people in architecture: split-level suburban homes, both bubonic and modernist campuses, and in diners, on freeways and ever-changing neighborhoods—and in these spaces are things, like the painted portrait of his deceased older brother. Cooper gives us a world of discovery, where the sun or the moon seems always to be bolding bright on the world below, if only to better illuminate the actions of people in their place.

Yet, discovery is not without upset. Cooper leads the reader down a plotted trail of collisions: what is old is being challenged as what is new is being discovered. Art, sexuality and the very idea of American life is being uprooted. This reaches a zenith in the book when the 1971 earthquake hits California and upends the structure of everything. Having spent the night at his parents’ after an awkward yet defining date, he makes his way through his family’s shaken home to find his mother. Is everything okay? he asks. “I don’t know anymore,” she says. That night, as the city recovers, Cooper and his school friends pile into a car after hours spent at the Old World diner hatching a plan to move together off-campus. Only he and his classmate Jean, who was driving (and with whom he will soon enter into a romantic relationship) are awake when they must stop the car, encountering a pack of dogs: “I couldn’t be sure if what I saw was a single thing or something composed of many restless parts. It—they—moved low to the ground, nearing us with such unmistakable purpose that Jean flickered on the high beams, daring the shape to make itself know.”

Throughout the book, Cooper offers a view into how contemporary art was experienced as it was being created. Art lovers and those looking for an education as the title promises, will be pleased: Being of student of Allan Kaprow, Cooper comes to figure out that “art requires all the awareness one has at one’s disposal.” Making sense of a story stemming from the ‘69 Venice Biennale, Cooper writes that “conceptual art was inevitable in an overcrowded world, and that those of us campaigning for art’s dematerialization were inevitable too.” In a conversation with a classmate, he is asked accusingly, “Do you read Artforum or something?” Often, there is an aching in these moments that bring together art and life, reminding the reader that there is no difference. Every time someone speaks ill of seemingly outdated modes of art—such as painting, the portrait of his brother is evoked, a reminder that progress cannot just be a refusal of the past, that what comes before has meaning and weight and is part of the present story.

Beyond content, form is in dialogue between art and life, as well.

Three quarters in, the first essay ends. So enthralled, a reader could be forgiven if all they wanted was more of the same. But this is not a book about just art, or just pleasure. It is a memoir. In Cooper’s life, a disruption beyond criticism or an earthquake shakes the foundation on which he and others live. He becomes aware of HIV/AIDS first as a bystander living in West Hollywood, and then as an intimate in a long-term relationship with a man living with HIV. One could say that nothing prepares the reader for the arrival of the virus in this story. But Cooper is an artist, conveying meaning through form and words. He does prepare us: the dogs, the collision between old and new, and the way he folds the AIDS crisis in at the tail end of the first essay, thus signaling the completion and the beginning of a new era. Giving us a framework to consider the preceding pages, Cooper writes, “let’s call the time I’m talking about ‘the Great Before’. Before we knew a virus lay in wait.”

The book concludes with urgent and contemplative essays that find Cooper negotiating domesticity with his partner in the face of death, and then attempting to make sense out of life and art after his partner dies. Before he wraps up the opening essay, Cooper describes a piece of artwork he has made that impacts one’s ability to speak: “Small one-ounce weights could be stacked on a post that hung below one’s chin, making speech progressively more difficulty with each added weight, until the only language possible was the garbled effort to shape a word, to complete a sentence, to say what couldn’t be said.” A book, like a work of art, does not have to be about anything. It can just be. But one can’t help but feel that with My Avant-Garde Education, Cooper is putting language to experience. Here we have the riddle of the book; can an education ever happen “before”?

Is it small minded to think the crux of the book hangs on AIDS and its meaning? Is it this reader getting too stuck on the idea that HIV/AIDS is a medical, social and postmodern condition? Maybe it is, yet so powerful is the introduction of the virus in Cooper’s life and his story that it is hard to let go of the idea. Maybe that is the point: to move forward, be it in the world of contemporary art or within the AIDS crisis (both of which are ongoing), we have to make sense of that which came before.

'Erebus' by Jane Summer and 'Fanny Says' by Nickole Brown
A Poem by Octavio R. González
‘Feder: A Scenario’ by Nathanaël