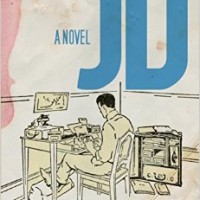 Jonathan Ascher, an acclaimed 1960s radical novelist and poet, has been dead for thirty years and all but forgotten when an academic approaches his widow Martha for permission to consult Jonathan’s private papers in preparation for writing his biography. Initially hostile to the biographer and his request, Martha eventually relents, but not before she herself begins reading her husband’s journals. Jonathan’s journals recounts his sexual adventures in the pre-Stonewall gay underground of New York City and the social upheavals that eventually inspired his breakout novel JD, which established his (fleeting) fame as a novelist. (JD, the title of Mark Merlis‘ novel, actually refers to Jonathan’s novel, and may stand for “junior delinquent” and/or James Dean.) The journals function as part memoir and partly as a history of the mid-twentieth century, including the nascent gay rights movement. Not only do Jonathan’s journals force Martha to confront the “secrets” she kept from her husband—by confronting the secrets he kept from her—but they also force her to confront the enigma that was their son Mickey, the simultaneous product and victim of the secrets of their marriage. Martha learns from Jonathan’s journals the fateful episode that finally led to the true cause of Mickey’s death during the final days of the Vietnam War.

JD switches back and forth between the voices of Martha and Jonathan: she responds to his typed words (written almost immediately after the incidents they describe) with her own recollections filtered decades later and tempered by hindsight. For now Martha can have the final word; but she grimly recognizes that once she has died, she will no longer be able to respond to Jonathan’s written journal, or to the writings of his biographer. And then her voice will be ever after distorted—or worse, erased; she has already seen that even Jonathan’s brief moment of fame in the sixties and seventies is barely enough to keep his memory alive.

Counterpoint to the literary argument between Jonathan and Martha is the biographer Philip Marks. The narrative does not provide his voice directly—his story is filtered through Martha’s experience—but he serves as an imperfect mirror to Jonathan:  he too landed a tenure-track position at a second-rate school, teaching poetry to second-rate students. Marks, however, recognizes and accepts that he is a second-rate academic, and will never advance beyond that, in much the same way that he recognizes and accepts that he is unambiguously gay: the out Marks who visits gay dance clubs contrasts sharply with the furtive Jonathan who cruises for sex in tearooms.

This self-knowledge is the key difference between Jonathan and Marks, and suggests the sole way that Jonathan’s novel JD has succeeded in presenting or predicting a new American masculinity. Jonathan receives the inspiration for his novel while discussing a tearoom incident:

“So, let’s see, you want a world where boys let you blow them and feel just fine about it.”

“I want a world where boys feel fine about whatever it is they do, because they see a way forward in the world.  A common world they can grow into and know how to be a man in.”

Philip Marks likewise serves as an imperfect mirror to Mickey, whose story is brought to life through Jonathan’s writings and Martha’s recollections. If Marks manages to find a new way to navigate the world, Mickey’s story shows how the tumult of the sixties and seventies failed to provide him with a similar map.