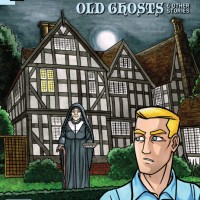 You can tell a lot about a culture by the culture’s villains in popular media. While anti-bullying has rightfully quashed kicking sand in 97 pound weaklings’ faces, it’s perfectly fine these days to hurl all the insults you want at extremist Islamic militants and Russian mobsters. Another acceptable punching bag, especially for liberals, is conservatives.

Edwards mentions in his introduction to Politically InQueerect: Old Ghosts, that he started this comic as a spoof about gay Republicans. How could a relationship based on what seemed like an oxymoron even exist? But the more he wrote the comic strip, the more Edwards found himself engaged with the characters. And as the strip expanded, his Republican characters Archer and Todd grew with the times; changes like the legalization of queer marriage couldn’t help but affect them.

In this tale, Todd and Archer go to England, in order to help Archer’s mother move Archer’s grandmother out of their centuries-old family home. Grandma has plenty of gruesome legends about the homestead: the house is packed with ghosts, murders and hauntings. A bastard baby was tossed in the fireplace, and it’s mournful cries still haunt the house. A dark stain on the wall is blood leaking from the severed head of a lady Tabitha, murdered in the Regency period by her lord husband. Todd is fascinated, but Archer brushes the stories off. Readers discover via flashbacks that Archer was plenty scared of hauntings, back in his childhood days. Are the tales real, or just figments of an old woman’s vivid imagination?

This volume also includes a handful of short strips from the comic’s 14-year history, including a beef cake pinup fans will enjoy. It’s a credit to Edwards’ talent to see how he’s expanded what started as a clichéd joke, into an insightful, humorous and unique comic.

'Called Back' by Mary Cappello
‘Phallos’ by Samuel R. Delany
'The Metropolis Case' by Matthew Gallaway