Still catching up on the Lammy finalists? Here are the remaining three finalists in Lesbian Mystery. (You can read my reviews of Slash and Burn by Valerie Bronwen and Acquittal by Anne Laughlin here.)

The Old Deep and Dark: A Jane Lawless Mystery by Ellen Hart

The plethora of awards tells you something–Ellen Hart provides readers with consistent compelling mysteries with a detective who is relatable and secondary characters who we can believe.

When Ellen Hart is at her best, which is most of the time, Jane Lawless is, well, flawless. The Old Deep and Dark is, incredibly, Hart’s 22nd mystery featuring restaurateur-cum-PI-cum-lesbian-with-relationship-issues, Jane Lawless. The Minnesota not-always-nice sleuth has a few regular characters who appear with her, including her father, an attorney, and my personal favorite, her BFF, the flamboyant and sensual and dramatic Cordelia Thorn. 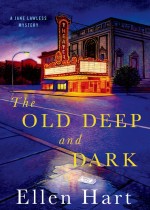 Reading a new mystery by Hart is like seeing old friends you didn’t realize you’d missed so much–the kind of friends where you pick up right where you left off, even if it’s been a while (in this case, since Taken by the Wind in 2013).

Hart always gives us a plot and a subplot. Sometimes they dovetail, sometimes they do not, but it’s a formula that always seems to work for her and in The Old Deep and Dark I found it to be exceptionally well-crafted.

In this novel Jane is helping her father on a complicated case that will resonate with many who can’t stay away from reality TV or call-out social media. (Which is, you know, most of us.) Jordan Deere is a country western singer who just got himself shot. The cast of characters who wanted him dead is pretty long. (and Hart faithfully provides readers with a genealogy of characters in the front of every novel for which I and other readers are grateful. If only the Tolstoy and Dostoevsky  had done the same…) Deere had just written one of those tell-all memoirs guaranteed to not just blow up his own life, but also the lives of everyone close to him.

Enter Cordelia. The irrepressible and somewhat narcissistic drama queen (literally, as she’s a theater maven) has been renovating an old theater that she and her sister Octavia have bought. Intriguingly, the theater was a former speakeasy during the days of Prohibition. (It is the Old Deep and Dark of the title.) A warren of hidden rooms for the tub-gin drinkers of more than a century ago, the space is requiring more work than Cordelia expected.

And then there are the bodies.

Faithful readers of Hart’s know that wherever Cordelia goes, drama is sure to follow. So of course there would be bodies. In a clever little homage to Poe’s “Cask of Amontillado,” Hart has Cordelia discover a trio of skeletons within the bricked-up walls of the speakeasy part of the building. But as Cordelia says, “Every theater should have a ghost. It’s tradition.”

And herein comes the dove-tail. Inexplicably, autopsy results uncover a startling reveal: the victims of The Old Deep and Dark were killed with the same weapon as Jordan Deere.

Uh oh. It’s a small world after all.

There are a host of intriguing characters filling out the stage, as it were. There’s Octavia, Cordelia’s sister and her daughter, the precocious Hattie. There’s the Minneapolis historian and perennial dinner guest of Cordelia’s, Archibald Van Arnam, who’s been looking at the theater’s records, hopeful that Cordelia won’t mind. He’s also the one who reveals that the last owners of the place, Gilbert and Hilda King were murdered. There’s Booker Tiberius Deere, the son of Jordan and…well, you’ll see. There’s Erin O’Brian, a playwright connected to the Deere family. And there’s Jane’s lovers–the ex, Julia Martinsen who is a recurring character, and the current, Avi Greenberg, who provides yet another subplot to this very full novel.

There’s a lot going on in The Old Deep and Dark and the way Hart seamlessly pulls the two storylines together while also delving into what is happening with Jane and Avi (why oh why can’t Jane find true love?) provides the page-turning element. Richly detailed (the whole Prohibition history fascinates the reader as much as it does Cordelia), complex without being overwhelming and, as usual, giving just enough back story to fill in the gaps for new readers while not bogging them down in over-sharing, The Old Deep and Dark is what one always wants from a mystery: well-plotted, well-written, thoroughly engaging and very, very satisfying.

Done to Death by Charles Atkins

It’s impossible not to love Charles Atkins’ sleuths Lil Campbell and Ada Strauss. “Done to Death is the third in his cozy Agatha Christie-meets-Murder She Wrote series featuring the elderly widowed–and now lesbian–Miss Marple-a-likes. Lil and Ada live in Grenville, Connecticut–known for antiquing and, as was the case for both Miss Marple and Jessica Fletcher in their sleepy hamlets, multiple murder. 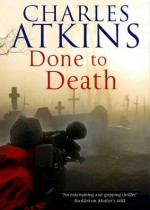 The dynamic and not-yet-doddering dyke duo delves deeply into that rarified world of…reality TV? Lil writes a column on antiques (the campily titled “Cash or Trash”). Barry Stromstein, a reality TV show producer for Lenore Says, is desperate for a new idea with which to placate his Oprah-meets-Lenore Helmsley boss, Lenore Parks. Lil provides the idea, Grenville the setting: “Antiques Roadshow meets The Hunger Games on the set of Gilmore Girls.” The idea is that estate sales will turn into Coliseum-style battles to the metaphorical death.

Stromstein for the win! Titling the show Final Reckoning, he sees the Lil and Ada as the women who will save his job and maybe career.

But then, well, stuff happens.

Like Lenore gets murdered in her dressing room. And Barry is, of course, the prime suspect. Not that there weren’t plenty of people who wanted Lenore dead, like her two children and pretty much anyone who had to deal with her. And if you are oh-so-tired of the Kardashianization of the tube, Atkins delivers a few solidly placed send-ups of the whole Honey-Boo-Boo-meets-Duck-Dynasty-meets-Animals-That-Eat-You-Alive genre.

Not surprisingly, Lil and Ada track down the killer (we sort of get there before they do, but it’s a very enjoyable trip, nevertheless) and all’s well in Grenville again…for now.

I would love to see this series on TV–it would give Rizzoli & Isles a good run (and Lil and Ada are actual lesbians). While this is not the best of the series, it’s still very compelling because Lil and Ada are just wonderful characters. Even after we’ve figured out whodunit, we want to sit down and have some tea with them and ask Lil about that piece of china handed down from our great-grandmother and….

For best cozy, Done to Death gives Dame Agatha a run for her money.

Catholic school and lesbian private investigator. Be still my heart.

I like this book. A lot. Jil Kidd is trying to help salvage the foundering firm of her former mentor, Padraig O’Hanagan. He’s been asked to basically ferret out bad behavior at a local Catholic school that is unsettling the board and leaving the school open to lawsuits. Jil doesn’t want to take the assignment that lands before her, but does–huge favor. To say religion, especially Catholicism, is not her scene is to understate it in the extreme. And so she goes in to St. Marguerite’s undercover, as a religious studies teacher. Her first day a test–a real test–as she discovers staff still using terms like “retarded, a perky lesbian stereotype of a gym teacher and oh yes, the principal.

St. Marguerite’s is a Catholic school with issues. All those recent news stories of lesbians being fired from Catholic schools for violating codes of conduct–like getting married or having babies with their partners or just stupidly putting in their mothers’ obituary that she was survived by her daughter and her partner? 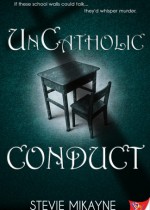 Mikayne does a nice job of taking stories ripped from the headlines and weaving them into a solid lesbian (and gay) mystery. I found this aspect of the novel especially satisfying, having written extensively about these real-life stories which have ratcheted up discrimination in the workplace for lesbians. (Because, as I know as an ex-Catholic school girl, lesbians and Catholic school go together like, well, you know…)

And speaking about that, what’s a lesbian mystery without a romantic edge? The problem for Jil is not just that she’s angry about the whole assignment and feels personally affronted by it, but then there’s Jessica Blake. And Jil is hot for principal.

Murder doesn’t even dampen her ardor, even though Jessica is right there at the center of all of it. When a student becomes the school’s latest victim, Jil has to re-think what she knows and what she feels and focus on finding out what kind of unholy havoc is being wrought at St. Marguerite’s–and for how long. But the deeper Jil delves, the sadder and scarier the story becomes. The recent tragedy at St. Marguerite’s is far from the first. And what happened at the school with all its rigid rituals and traditions back in the days at the cusp of Stonewall raises more questions that Jil must answer–quickly.

UnCatholic Conduct moves smoothly and Mikayne layers her story with different reveals, first about Jil, then about St. Marguerite’s, then about the various secrets that have lain dormant–or have they?–over the decades and how many people they may have hurt. We’re not sure Pope Francis will be reading this novel, but you will definitely want to.

Broken People Follows a Character in Search of Personal Transformation
The Banal and the Profane: Donna Minkowitz
‘[insert] boy’ by Danez Smith