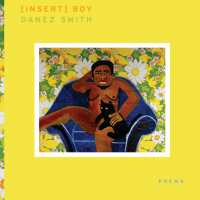 The day after Darren Wilson was not indicted for the killing of Michael Brown, Danez Smith published an open letter to white poets called “We Must Be the New Guards.” In the letter, Smith writes, “I question what men like Darren Wilson and George Zimmerman were defending themselves against except a fear they nursed since elementary school, a fear that screams ‘SHOOT’ somewhere deep in their minds, their hands.” Smith continues, “I ask you to question what makes you safe?”

Danez Smith’s writing is not safe. How can one’s writing be safe when their life is constantly in danger? In his debut poetry collection [insert] boy, Smith calls for a world where black boys and men are worshipped instead of feared, a world in which they live long enough to “feel the settling of joints, the experience of bones” to “die ninety & beautiful / & the causes more normal.”

In [insert] boy, Smith writes intimately about his complex relationship to multiple forms of violence. Smith discusses domestic abuse in his family, the physical and emotional effects of rape, and being the target of racist and homophobic language. All of these experiences are based on his interactions with other men. They also includes a series of poems about his many attempts at healing, a constant process which unfolds throughout the book.

The body is present on almost every page—particularly the mouth, knees, and hands. These three body parts often appear together in the same poem. In “King the Color of Space, Tower of Molasses & Marrow,” Smith writes, “I want to kiss you. Not on your mouth, but on your most / secret scars, your ashy black & journeyed knees, // your ring finger, the trigger finger, those hands / the world fears so much.”

As the collection progresses, Smith chronicles his changing relationship with both his body and with men. Smith shifts from associating his body with harm, to learning how to warmly embrace other men. This transformation is evident in “Poem in Which One Black Man Holds Another.” Smith writes:

I am learning what loving a man is
not, that we don’t have to end with blood

'Out East: Memoir of a Montauk Summer' by John Glynn
‘Mrs. Martin's Incomparable Adventure' by Courtney Milan
'The Daring of Paradise' by Brian Day

H. Melt is a poet and artist whose work proudly documents Chicago's queer and trans communities. Their writing has been published by many places including The Feminist Wire, The Offing, and Them, the first trans literary journal in the United States. They are the author of The Plural, The Blurring. H. Melt works at the Poetry Foundation and Chicago's feminist bookstore.