‘I Left It on the Mountain’ by Kevin Sessums

‘I Left It on the Mountain’ by Kevin Sessums 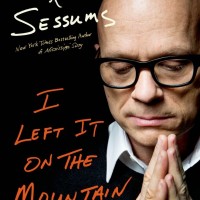 Perhaps the best way to begin this review of Kevin Sessums’ hopeful and moving new memoir, I Left It on the Mountain (St. Martin’s Press), is to acknowledge the challenge that the reviewer (or at least this reviewer) faces: How do you convince readers that a book with a first chapter titled “Starfucker” is, in the end, likely to be one of the most spiritual pieces of writing you will encounter in quite some time? Yes, Sessums gives us at least a hint of the spiritual nature of his memoir in the title, which echoes the African-American spiritual “Go Tell It on the Mountain.” Further, the cover photo by Bill Miles shows Sessums in prayer. But how does this jive with interviewing Courtney Love in a bathtub, or touching the shaved pubic hair of a deceased Kurt Cobain?

Those hoping to find a juicy celebrity exposé in Sessums’ book might well be disappointed. Of course, any book about Sessums’ life (his celebrity interviews for Vanity Fair and Andy Warhol’s Interview are renowned) must include some degree of hobnobbing with the stars. But the scenes with the glitterati are more intent on revealing Sessums’ looming emotional and spiritual crises than providing titillating gossip. He finds himself more comfortable with actors such as Jessica Lange and Hugh Jackman, who seem to have survived Hollywood without losing their souls. At a Hollywood party, when Michael J. Fox tells of a highly sexual written list of words Sessums mistakenly left at the actor’s house, Sessums chooses to reflect on Fox’s revelation rather than trivialize it:

I moaned, hearing the litany itself lend even more noise to the party, muddying the laughter of a neighboring starlet. With each word Michael had fun flinging back at me I heard how I not only sexualized my own life, but tried to do the same with others. Sam Shepard had found it so alarming during a conversation I had with him down in a horse stable in Charlottesville for his own Interview story that he would have bucked himself if he had not said something. “Everything is sexual to you,” he had stated quietly with a stare so steely it had stopped our conversation for a moment.

Later, a bracing discussion with Hugh Jackman further clarifies Sessums’ thinking about his life. The two talk about meditation, death and feelings of bodilessness, but at the center of the conversation is Sessums’ upcoming walk down the Camino, the five-hundred-mile trek from St. Jean-Pied-du-Port, France to Santiago de Compostella, Spain, on which pilgrims have journeyed for over two millennia. Sessums writes:

I had the sensation of leaving my own body by burrowing down to its deepest desire, the seam in its core. Jackman had just summed up my whole dilemma. It was the journey—the trudge—I had been on my whole life. How do I combine the spiritual with the carnal? Was this why the Camino beckoned me so? “Not yet,” was all I could answer.

The question of what beckons Sessums to walk down the Camino in some ways becomes the byline of the journey itself. The pilgrimage—which takes up about a quarter of the memoir—is told not by a narrator who has had the time and distance to reflect on the experience. Instead, Sessums wisely gives us the journal entries from his month-long odyssey. The immediacy of this form allows the reader to experience the Camino with the author. We get glorious moments of unfiltered joy, as when Sessums and two Irish sisters greet the dawn with a spontaneous rendering of “Danny Boy,” and moments of despair, as when, after a particularly grueling day, he writes, “It was the worst day yet on the path. I wanted to give up and go home for the first time.”

While the meaning of the pilgrimage reveals itself slowly to Sessums, he does state early on that he wants to spend a month free from using crystal meth. In this, he is successful, yet the success is short-lived. After returning to the U.S., Sessums begins using again, and his depiction of addiction is certainly among the most devastatingly clear I have ever encountered. The addiction is not only very nearly fatal; it is also a deeply religious experience. After an overdose in which he stays up for four days, Sessums tells us what he has learned about Lucifer, a.k.a. Satan:

There is, for certain, a playful vulgarity about him with which he likes to goad God. Lucifer can find enjoyment in being a bit mean as he toys with you. Takes pleasure in his power even as he’s frustrated at not being the ultimate source of But there is also a grand streak of benevolence in him. I came to understand that he has no choice but to play the role God created for him to play. His existence is God’s will. In that Lucifer is God’s servant. That is his faithfulness and not his fallenness.

I’m giving nothing away by telling you that Sessums finds a way to deal with his dependence on crystal meth (after all, he lived to tell the tale), but to report that the book is solely a memoir of addiction and recovery doesn’t give justice to this rare work of literature. I Left It On the Mountain is a spiritual page-turner.