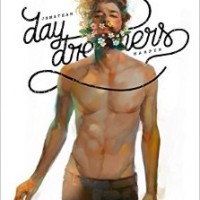 Jonathan Harper’s debut collection Daydreamers, published by Lethe Press, is aptly named: each story  contains the ruminations of young men drifting through their lives, either making bad choices or failing to choose, often clueless as to where they are going, and quite possibly where they’ve been. The nine stories contained therein (five of which are original to the collection) defy easy categorization: for all their apparent surreality, they do not rely on the standard tropes of speculative fiction, but neither do they read like most realistic fiction. They, like the characters they describe, exist on a threshold between genres.

The stories are not purely the fantasies of the main characters. Several of the men whose stories we read have arrived at a cusp or have reached a crossroads in their lives: either forced to live on their own, alone, for the first time (“Repossession”); about to enter graduate school (“We Only Flinch When it isn’t Necessary”); or about to buy a house and/or a business (“The Cake is a Lie”). They have reached some defining marker of adulthood, but have not yet crossed over, and their liminal status heightens the surreal quality of the collection. For example, August, the protagonist of “Nature,” has left Medford, MA, the home of his childhood, but has moved in with his older cousin; he still has to complete tech school and secure a full-time job. His fascination with body modification and being suspended in front of a crowd are metaphoric of his suspension between adolescence and adulthood.

Due to the characters’ contemplations, it is not always possible to discern what is the “true” story behind these stories. In three of them (“The Cake is a Lie,” “Wallflowers,” and “The Bloated Woman”), after leading the reader through the story, the unreliable narrator then contradicts his earlier narrative with the “correct” story. But after being led astray, how are we then to trust him? Is the “corrected” version necessarily the true version? Are either version to be trusted for that matter, or should we believe both? “Wallflowers” especially demonstrates how truth is more about social consensus than it is about factual evidence. A fictitious person (“Jonas”) created by a clique of  high-school outcasts takes on a life of his own–literally?–until the entire community, adults included, insists upon his actual, physical reality: in short order everybody has a story about Jonas. Similarly, “No More Heroes” shows how the shared storytelling of Dungeons and Dragons draws and keeps a group of gamers together, even against belligerent outsiders.

The personal myth-making of Harper’s characters, far from being a passive act, are personal acts of creation: by creating these stories, his characters are creating their lives. These stories are therefore much more than the chronicles of a lost generation, adrift, unable or unwilling to equal the accomplishments of prior generations, much less surpass them; they touch on such greater questions as the finding of identity and community, and what is the nature of truth—if enough people believe a certain factoid, Internet meme, then does it ipso facto become true? Are communal truths more important than individual truths? Who decides? With clear, flowing prose, Harper poses these questions in his deceptively leisurely stories; it is up to the reader to decide how to answer them. Although these stories may have readers doubting the veracity of their tellers, there can be no doubt that this collection heralds a major new talent.