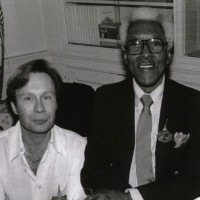 Bayard Rustin (1912-87) was an African-American Quaker activist who taught Martin Luther King about Gandhi’s non-violent principles and organized the 1963 March on Washington. Forced from the Civil Rights leadership by homophobia, he became an advocate for gay rights. Walter Naegle was Rustin’s partner. In 2013, Naegle accepted Rustin’s Medal of Freedom from Barack Obama on Rustin’s behalf and he recently wrote the Foreword for the reissue of Time on Two Crosses: The Collected Writings of Bayard Rustin (Cleis Press), which also contains a new Afterword by Barney Frank. The ebook is now available. The printed edition is forthcoming this summer.

Adrian Brooks recently emailed Naegle some questions about Rustin’s legacy, his role in organizing the March on Washington, and the current state of race relations in the United States.

You were with Bayard Rustin for ten years. How did you meet and when?

We met by chance in April of 1977, on a corner in Times Square. We saw one another and started talking, and the conversation continued for ten years.

The Quaker faith is quite revolutionary in that it places responsibility for the human condition more in the hands of individuals, rather than having them wait for divine intervention. It calls upon us to act on the teachings of Christ, to help the less fortunate and behave in a peaceful, just manner with our fellow beings. Raised with such ideas in a town where de facto segregation was the norm, he felt compelled to respond. Being “revolutionary” to Bayard meant confronting injustice honestly, nonviolently, and with the intention of building a more loving, inclusive community.

How did Rustin affect FDR’s executive decision to desegregate the defense industries in 1941?

Bayard was working with A. Philip Randolph on a march that sought to bring thousands of African-Americans to Washington to protest discrimination in the defense industries. Threatened with a massive demonstration, FDR issued an executive order eliminating racial segregation in those vital areas. Randolph then cancelled the march, a decision that disappointed Bayard, who correctly predicted that it would take years for the order to be enforced. He wanted more immediate action.

In 1942, Rustin refused to move to a black section of a bus in Tennessee. He was arrested and beaten, eight years before Rosa Parks. Any comment?

Bayard was part of an interracial group of radical pacifists who sought to challenge Jim Crow practices in the north as well as in the south. In small groups and sometimes even alone, they would defy racist seating patterns on public transportation and have sit-ins in hotels and restaurants that denied service to African-Americans. Mrs. Parks’ action a decade later was the spark that set off a movement rooted in decades of work by Randolph, Du Bois, the NAACP and others. So while she wasn’t the first (even in Montgomery) to defy unjust seating patterns, her courage presented an opportunity for united action.

Rustin declared solidarity with Japanese-Americans who had their property seized in World War II; with Indians trying to win freedom; with African nations freed from Colonialism; and with Soviet Jews. What was the binding element?

At the root of Bayard’s actions was his belief in the oneness of the human family. His last words in the extraordinary documentary Brother Outsider: The Life of Bayard Rustin are, “We are all one, and if we don’t know it, we will learn it the hard way.” He also knew that if you wanted people to come to your aid when you were in trouble, you needed to be ready to help them in their time of need.

He was jailed from 1944 to ’46 as a conscientious objector during WWII and suffered horrible brutality in prison. How did this affect him?

The brutality of incarceration begins with the deprivation of one’s freedom. But while they could imprison Bayard’s body, they could not imprison or destroy his soul. He saw his prison time as a time for reflection, study and, more importantly, organization. He worked to desegregate the dining halls, community rooms, libraries and other parts of the prison. He started education classes and musical-theatrical events for the inmates. He did have moments of despair and depression, but they didn’t define his time in prison.

Rustin organized a Freedom Ride in 1947, which was central to building the Movement. When did they meet?

Bayard met Dr. King in February of 1956. He was encouraged to go to Montgomery as Dr. King was launching the bus boycott. Because of his experience in nonviolent direct action, Rustin was an ideal person to mentor Dr. King, who had theoretical knowledge of the philosophy of nonviolence, but no practical experience. When he arrived in Montgomery, Dr. King’s home was surrounded by armed guards and there were guns inside the home. Bayard guided him through the process of disarming the fledgling movement and asserting a very strong and public commitment to nonviolence.

How did going to India in 1948 after Gandhi’s assassination affect him?

Bayard’s visit reinforced his knowledge of Gandhian strategy and tactics, and helped him to visualize actions on a much larger scale than he had earlier organized and participated in. He also educated Indian groups about racial tension and conflict in the U.S.

What was Rustin’s role in the March on Washington in 1963?

Bayard was the Deputy Director and chief organizer. The march really began as a push for jobs and a higher minimum wage, but as the Kennedy administration put forth a Civil Rights bill and the Birmingham demonstrations captured the airwaves, the call for “Freedom” quickly overtook the economic demands.

Today, we’re seeing cops and vigilantes gunning down and murder blacks, including black kids, in major cities, and our courts refusing to prosecute. How would Rustin view this crisis?

Bayard would be disturbed by the increasing militarization of our society at all levels. He believed in the oneness of the human family and was opposed to classifications or behavior that create an “us-versus-them” mentality. When there was a break in the human fabric, he sought to repair it—to build community and bring people together. I believe that he would advocate for a police force composed of members of the community that they serve and support training and practices that promote de-escalating a situation of conflict and resorting to violence only as a last resort, not a first response.

Barney Frank told me that the way to affect social change is to organize. When we have an African-American President, how much more can people do?

Plenty. The President is elected to serve all Americans, so while he may be a symbol of progress in race relations in the country, he cannot be expected to favor one community over another. Organizing needs to be done at the local level, from the bottom-up, not from the top-down. In a climate where some are seeking to suppress voter turnout or manipulate outcomes through gerrymandering, the call for local participation needs to be even stronger.

Why didn’t Dr. King support Rustin when he was attacked for being gay? Was Dr. King afraid? Why did he allow Rustin to become a martyr to homophobia?

America was homophobic. Being public about your sexual orientation could result in job loss, shunning from friends and family and possible imprisonment. So although there were a few groups advocating for equal rights for homosexuals, we must view Dr. King’s reaction in the context of that time. Even though King was better educated and more sophisticated than some of those surrounding him, he was still quite young and subject to pressure from his peers. While Bayard said that he didn’t think Dr. King cared about his being homosexual, he saw Bayard’s sexual orientation as a potential distraction that would be used to discredit the movement.  Bayard, who always put the movement before his personal wishes or needs, agreed to step aside. It hurt him, and he was disappointed that Dr. King didn’t defend him, but he also understood that it was a political, not a personal, decision on King’s part.

In 1986, Rustin famously said, “Gays are the new niggers.” While marriage equality is nearly won, the GOP wants to take voting rights away from women,  the elderly, immigrants, trans folk, the poor, college students and people of color. We see the biggest income gap ever, and the highest rate of incarceration, especially among young blacks; we’re polarized as much as we were in the ‘60s; and Congress is virtually dysfunctional. What would Rustin say to young, black kids trying to escape institutionalized racism, income inequality and bottom-rung status in a nation run by the richest 1%, almost all of whom are white?

I don’t think that most young kids see all that you have mentioned, but clearly, they are aware of some of it, particularly as relates to incarceration. Bayard was always very good at working with young people—inspiring them and helping them recognize and utilize their talents. I think that he would advise them to continue their education, both inside and outside the classroom, and to be thoughtful and questioning in the process. Education has always been a way up the ladder.

31st Annual Lammy Finalists
Reader Meet Author: Personal Advice from Author Laurie Weeks
'Boy Erased' the Podcast, Confirmation of a Sequel for 'Call Me By Your Name,' and Other LGBTQ News