‘The Vines’ by Christopher Rice

‘The Vines’ by Christopher Rice 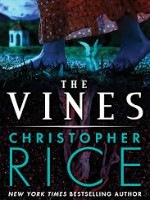 When Christopher Rice launched his writing career, he avoided his mother’s shadow by steering away from her fame in the horror and speculative fiction genres. By creating his own voice, Rice established himself as a master of mystery and intrigue in LGBT fiction. However, with The Heavens Rise, those horror genes from Anne Rice that lurked in his blood pulled him into the world of spirits and hauntings. Rice’s latest novel, somewhat of a publishing experiment using 47North–an Amazon.com imprint, creatively blends his first talent for mystery and suspense with his heritage and own imaginative horror to produce a captivating horticultural nightmare.

In The Vines, Rice penned a story about the sins of the fathers condemning future generations worthy of Nathaniel Hawthorne’s mastery of the genre. Caitlin Chaisson, the wealthy heiress of a restored plantation outside New Orleans, discovers her husband in the throws of an affair, or at least an intense sexual fling outside of their marriage, and attempts to take her own life. Spilling her blood on this ground unleashes a hideous past of slavery, betrayal, and curses that results in death and mayhem for those around her. With Caitlin unstable, the daughter of an employee, Nova, and Caitlin’s estranged best friend, Blake, join forces to uncover what prowls beneath the dirt upon which they walk.

Nova and Blake uncover what everyone around them refuses to acknowledge: plant roots underneath the earth are hunting for people. They seem to control a force that inflicts a horrible justice upon those who betray a loved one. This very monster, the vines underneath the soil that grow and hunt and kill, presents the reader with the most original aspect of this story. Horror writers often struggle the most to craft a unique supernatural force, what with centuries of tales already telling us about ghosts, goblins, vampires, witches, and other sinister beings that haunt the earth. By using the vines, Rice transforms what could have been just another scare and history lesson about the evils of slavery into something transformative and new. To be sure, people end up behind the horror, but the seemingly uncontrolled hunger of a tree generates extra tension and keeps the reader guessing throughout. Rice manages this accomplishment in horror while also exploring the less-than-savory Louisiana past through slavery. After all, we learn early that the sins of the fathers in this case come from the abuse of owning fellow humans, and the racism and southern racial hierarchy that continued long after the abolition of the vile peculiar institution.

The gay element of Rice’s latest novel also presents a refreshing story line. Woven into his narrative about the vines and the Chaisson family sins, Rice relies on his expertise at murder mysteries to introduce Blake’s own tragic story, at the hands of unknown villains who murdered his high school boyfriend. This proves refreshing because Blake’s sexuality is secondary to the horror story. As a gay reader and lover of speculative fiction, I enjoyed that his sexuality, though central to his lover’s death, was incidental to the main tale. Thus, Blake’s homosexuality was important, but not the source of the vines, nor the central component of what made this story scary.

Those worried about the sometimes taxing typographical errors that yanked readers out of a few of Rice’s earlier novels will love that he got that under control this time around. A few times, the writing felt heavy and lacked active verbs, but overall, The Vines wraps you in a uniquely crafted world of Rice’s imagination and keeps you firmly planted there–pun intended, turning page after page as you wait to learn the truth behind the chaos.

Indeed, Rice’s signature twist at end of the novel pulls together the murder mystery of Blake’s life, Caitlin’s downfall and family history, the contemporary deaths at the restored plantation, and what controls those creeping vines that shoot out of the ground to exact an evil form of justice. The Vines offers a captivating blend of Rice’s force as a writer; without being really scary, it will horrify you; without trying to serve as a typical murder mystery, it will keep you guessing to the end; and with just enough knowledge about the past and characters, it teaches you about slavery and the way it haunts us to this day. Rice combined his skill as a mystery writer with his adventures in horror to give readers something fresh altogether: perhaps a new genre of supernatural mystery. In that regard, like his mother before him, he created a path all his own, one more than worthy of her name.