‘The God of Longing’ by Brent Calderwood

‘The God of Longing’ by Brent Calderwood 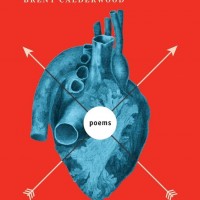 Understated, ironic and occasionally playful, Brent Calderwood’s poems in The God of Longing are vivid and calm. Even in “Fault Zone” (a four-part piece with earthquakes as the central conceit) is measured, restrained. Somehow Calderwood’s detachment makes heightens the reader’s experience. He loves his anaphora and (like Gertrude Stein) earns it, repeating in Part Four the phrase “There is a shock that feels like pain” comparing geographic tremors to orgasms, “The boy runs to the toilet,/ releases his fingers. A pearl/ slug drops into the bowl.” Naturally, from this point he complicates and elaborates : “At school they throw spittle,/ and a rock to the base of the skull,/ There is a shock that feels like pain, a blurring of vision.” Now spit and rocks can both be projectiles, I suppose, but describing what must be happening here as throwing spittle feels like a reach. That being said there is certainly an eloquence and keen incision here. Semen is described in terms both sacred and repugnant ie “pearl slug.” The personal upheaval of sexual climax is combined and ambiguated with the upheaval of abuse and being rejected by the tribe of men. Ostracization. So “Fault Zone” is all about the implacable shifts in the earth beneath our feet, the tremors so commonplace we barely notice them, culminating in the last bit, where epiphany becomes something appalling and stigmatizing. Puberty is a cruel earthquake, exposing one to confusion and degradation.

There’s a kind of muted pity, resignation and disgust in Calderwood’s tone, as if we were having martinis with God, and God was Simon Cowell. In “Stay Little Valentine Stay” the title serves two purposes. It’s so schmaltzy it strains credulity, and yet we know the boy in this portrait, is aching and tremulous in his need for male romance. Like so many of us, he attended a school where everybody gave everybody valentines, they were mostly platonic. He rushes home to savor the cards from other boys (“….I ran my hand /over the names of boys matt dan mike/ steve opened the envelopes they’d licked….”) In the end he sucks on candy hearts inscribed with messages like “Marry Me,” “Say Yes,” and “I Love You,” hanging on to these lame substitutes for legitimate care, because (like any other schoolboy) he lacks the experience to know the difference. What saves the poem from bathos is our understanding of his predicament. At the time when the poem is set, his likelihood of finding another boy like himself was far beyond remote. And I doubt we’ve gotten there yet.

In “The Golden Hour” Calderwood dupes us in a way. He paints a lovely reverie, of spending time with another man (perhaps a lover, perhaps not) by a lake. “The Hasids and hipsters are out on Prospect Lake./ Little boys, their tzitzis dangling, toss matzoh and challah/ to monstrous tow headed swans. They squabble and claw/ the soft baked braids while ducks peck holes in the flat crackers,/ and the sun bends down to scatter coins on the watter./ Each lit ripple has a shadow: itself and the negative of itself.” This first stanza has a nearly paradoxical feel to it, the language has a nice, palpable texture (squabble and claw) but Calderwood mixes fanciful images with the mundane and even the pejorative, describing swans as “tow headed monsters.” The coins on the water and sparkling ripples suggest a connection charity and the metaphyical. The spiritual. The scene, oddly, feels halcyon, and it doesn’t.

Later he describes holding the camera lens “like a baby’s head. “ Later still, he says, after extolling the moment to his companion as “The Golden Hour”, “Maybe I should tell you,/ it’s just a cliché, but for a moment,/ the whole city is silent, burnished.” The strategy of this poem is to undercut and refute the splendor of the occasion by dismissing it as cliché, and suffusing it with plain images like crackers, brownstones and ducks. But then, he backpedals and concedes how poignant and effulgent it is. By evoking similes like a baby’s head and a “busted flashbulb,” suggesting fragility, brevity, the spendid, rapturous instant appearing and gone before we can recover it. He contrasts the rhapsodic with the genuine, then they coalesce.

Calderwood achieves so much in The God of Longing. He doesn’t romanticize, his elegy for his brother is excruciating and confessional in the saddest sense of that word. He doesn’t shy away from depicting failed relationships or slipping quirky eroticism into poems like : “Swim” (You were growing/like the beach does at dusk) surely one of the strangest, more primitive sex poems I’ve read. But not graphic in the way you might expect. His poems are quiet, sardonic, sly and layered. In “Gretel Remembers” the endangered brother and sister gradually reverse roles. The God of Longing gets under our skin, with its astonishing and nuanced use of language, though Calderwood doesn’t always aim for obvious connections. These poems require patient, focused, engaged “conversation” but the benefits will startle and transfigure you.

Christopher Soden’s poetry collection, Closer was released by Queer Mojo/Rebel Satori Press in June. In August 2010 he was named a Full Fellow of Lambda Literary's Emerging LGBT Voices. In 2007, his performance piece : Queer Anarchy received The Dallas Voice's People's Voice Award for Best Stage Performance. He received his MFA in Creative Writing (Poetry) from Vermont College of Fine Arts in January of 2005. He teaches and lectures on craft, theory, genre, literature and publication. He writes plays, performance pieces, literary, film and theatre critique.