‘Nights at Rizzoli’ by Felice Picano

‘Nights at Rizzoli’ by Felice Picano 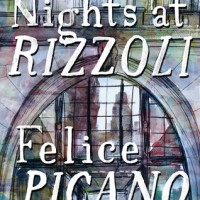 In his new memoir, Nights at Rizzoli, Felice Picano resists the temptation to think of late night Manhattan as an “elite city.” However, it is an apt phrase for the world he inhabited in the early and mid-’70s, when he worked nights at the old Rizzoli Bookstore, just south of the Plaza Hotel on Fifth Avenue. These were years in which a night on the job might involve a brush with haughty Mick Jagger or a sweetly unassuming Jackie Onassis, Greta Garbo or Salvador Dalí. Years that left him free to roam the city after hours, to explore the gay bars and the back rooms of the West Village, the dilapidated piers along the Hudson where gay men gathered for sex all night long. Nights at Rizzoli is a brief, sketchbook record of Picano’s encounters in both realms of a New York City that feels far more glamorous, dangerous and free, and somehow more fraught with history, than the one we know today.

Picano’s precipitous rise within the exquisite little world of Rizzoli started as a lark. The bookstore needed extra help for the holidays and the then–unpublished writer needed work that would leave him ample time to finish his first novel. However, Picano’s book-selling instincts–more English language translations of international writers like Garcia Marquez and Mishima, a shameless, bloody window display for the blockbusting Jaws–quickly made an impact on sales and earned the writer a permanent place on the payroll.

But turning a profit was not the purpose of the Rizzoli Bookstore when it opened in 1964. With its two-and-a-half stories of finely crafted Italian wood book shelves towering over marble floors shot with green and black, its wrought-iron and glass chandeliers, the shop was intended to be a New York showcase for the Rizzoli media and empire, which had been flourishing back in Italy since the end of World War II. By the 1960’s Angelo Rizzoli was the publisher of Corriere della Sera, Italy’s leading newspaper, and owned radio and television stations across the country. His dazzling Fifth Avenue outpost was a natural destination for Jacqueline Onassis–who once worked as a photojournalist–and other New York City luminaries.

To his credit, Picano mainly uses the store’s celebrity clientele as window dressing, opting instead to focus his attention on the shop’s lesser known, and more extravagantly interesting, denizens. Janet Flanner, The New Yorker correspondent whose “Letter from Paris” column helped to shape American impressions of Europe during and after the War, often came in looking “like a shorter, squatter version of George Washington in the famous Gilbert Stuart portraits.” Although she only ever spoke to Picano once, he devotes several pages (considerable real estate in this little book) to her and her life partner, Natalia Danesi Murray. Murray, who beamed anti-fascist radio broadcasts into Italy during the war and joined the US Occupation Forces in Rome to re-assemble the country’s compromised media apparatus, was hired by Rizzoli to oversee the opening of the New York City store. More importantly, she ushered into print several collections of Flanner’s New Yorker columns, preserving her partner’s ruminations on Europe for a new generation of American readers. By the 1970s the women were elderly but perpetually arm in arm, bundled up against the New York cold. In Picano’s recollection, they seem to float through the store as if to remind the decade’s wilder beasts of the generation that had won them their lavish freedoms.

History also looms large over Picano’s portrait of the West Village during this time. Here the names he drops are those of the city’s most storied gay bars–Ty’s, Boots and Saddles, Julius, to name a few–and of course the infamous Hudson River piers. But every street corner seems to spark a recollection from much further back in time. Picano’s elderly neighbor on Jane Street told stories of her great-grandmother, who could remember American revolutionaries plotting war at a nearby tavern. As a girl of twelve she led President Washington, who was passing through with a dashing young Alexander Hamilton, to a well where they could rest their horses. Nearly two hundred years later, Picano would live in the same tottering building where survivors of the Titanic spent their first night in New York City.

The palimpsest of revolution and cosmopolitanism that overlays Picano’s recollections is of course utterly appropriate to the post-Stonewall years he describes. After years of “actively working to change things, by putting ourselves and our bodies on the line everyday in a homophobic world,” it was suddenly “hot” to be gay. So hot that the success of every premiere or gallery opening was gauged by the gay men in attendance and Picano suddenly found himself partying at ultra-private clubs with “tuxedoed young oil sheiks with bedroom eyes and Oxbridge accents,” his tab magically paid simply for showing up.

Picano’s Rizzoli years ended where his life as a published novelist began, but his book does allow us glimpses into the future. The store seemed to have lost some of its glamour when Picano visited in the late-‘70s. By that time Rizzoli had become a national chain and the fading charm of its flagship reads like a prediction of the great sanitizing wave of commercial development soon to sweep the city. Seventeen years later, when Picano visited next, AIDS had turned New York into a ghost town, killing off his dearest friends, including his longtime partner Robert Lowe. Rizzoli had moved by then, yet Picano was nonetheless able to feel a little of the old magic in the new store. Its an ending that reminds us that New York, like the wide world beyond, is only held in trust by one generation for the next. Yet, to some small degree, the city also belongs to everyone who has made a life here, for as long as memory holds.

'Upstream: Selected Essays' by Mary Oliver
'Nina Here Nor There: My Journey Beyond Gender' by Nick Krieger
'Heiresses of Russ 2015' Edited by Jean Roberta and Steve Berman