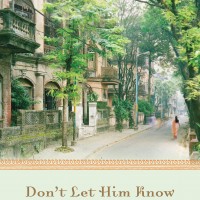 When it comes to the family, secrets are more than just secrets. A beautiful and compelling debut, Sandip Roy’s Don’t Let Him Know is a multi-generational story venturing deep into the hidden pasts of a single family over the course of decades. Though the novel is about so much more, the story ventures deep into a conversation about the taboo of homosexuality in Indian culture. Told in a tableau of interwoven stories tying the same family together, this feat of a novel shook up the expectations of its genre when it was simultaneously released in the US, UK, and India.

It’s hard to say where the story “begins.” Quick into the catalyst, the book opens with Romola Mitra and her son Amit having a difficult conversation. Amit has found a letter tucked away in the folds of Romola’s saris. It’s a love letter with an unknown named signed and no address. A man from years and years ago expresses his affection for the recipient while also bidding farewell in the wake of something that could never work. Amit assumes this letter is from a long-lost lover of his mother’s, when in actuality, it is written to his father Avinash, recently passed away, a closeted gay man who dutifully married Romola for reasons we slowly uncover.

The story goes from there in a series of fast-forwards and rewinds. Growing up in Calcutta, Amit now lives in California with his wife and son. His parents were arranged in marriage because neither truly voiced an objection. The novel comprises twelve self-containing stories. Though each could be read in one long sitting and suffice as a singular narrative, each has its own particular thrill which propels the reader onto the next one, into a different time period and set of characters entirely.

This montage of stories could revolve around a single question—one that Sandip asks his characters with frequency and calm urgency: “But are you happy?”

Don’t Let Him Know is a story for many audiences, balancing some very serious and contemporary issues with an unfailing thread of comedy and wit. One moment, we are with Avinash, experiencing the thumping thrill and utter terror of his first gay experience. Another moment, we are with Romola, heartbroken and restless, who finds herself drunk in a gay bar chatting away her troubles with a drag queen named Lady Bang La Dish. With tactful precision and haphazard pace, Sandip pans across these various scenes like a camera moving between rooms, spending enough time with each story to leave you invested and wishing the camera had stayed a little longer.

The Mitra family, at first, feels like it has nothing to do with you if you are not of a Hindu upbringing. The strength in this book is that the Mitra-Dutt secrets that both bind and detach its members have a certain universality you cannot ignore. The strength in the novel is not necessarily in the characterization of the Mitras, but in the prowess of Sandip’s storytelling. Tight language and the startling effectiveness of such ordinary characters are the result of the narration’s clarity and straightforward nature. These chapters take their time when a multi-generational story might cause one to hurry. The thread of this secret is not entirely as captivating in the context of closeted stories out there, but the most admirable quality to this story is its tendency toward the apolitical. Despite it’s charged subject matter, the story comes down to the complexity of relationships and one’s struggle with a silent desperation. The things we keep inside us have a way of eating us alive, and these stories are nothing short of brilliant in their ability to illustrate that phenomenon we know all too well.

The truths in this novel culminate to a portrait of the modern American family, despite their origination in Calcutta. Though we recognize many tropes in the story of a migrating family—the fears of leaving home and the isolation of an outsider—the shining quality of the book is its exploration of desire. One family, both together and alone, struggles with the pressures of doing what’s right for the best of a whole, versus indulging oneself in the truth of one’s own want.

'Zero Fade' by Chris L. Terry
'Maggie & Me: Coming Out and Coming of Age in 1980s Scotland' by Damian Barr
'A Sense of Direction: Pilgrimage for the Restless and the Hopeful' by Gideon Lewis-Kraus