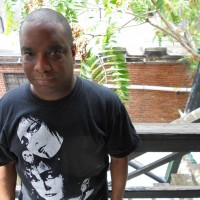 “‘Death and Two Maidens’ was my response to my research on African-descended Victorians. I wanted to write a penny dreadful story that went beyond the usual (pale-skinned) cast.”

Craig Gidney’s first short story collection, Sea, Swallow Me, was a startlingly expansive array of stories stretching from the Deep South to feudal Japan, and a book I devoured. With his new collection, Skin Deep Magic, I inevitably hoped for more of the same. It’s astonishing that such an ethereal title would prove to be pretty damn accurate. Skin here refers to the issues of race, so rarely plumbed in the actually conservative field of fantasy, that are explored. Gidney’s stories delve Deep within the folds of class, poverty, social isolation, which are further illuminated by the sheer Magic of his prose. All of this would be enough to label the collection a successful follow-up, but that all but one of the stories are linked by female protagonists and points of view is particularly profound. This elevates the book above the typical assortment of previously published work with more experimental or orphaned tales. These pages are packed with purpose.

I was a huge fan of Sea, Swallow Me, so I was looking forward to Skin Deep Magic. All stories but one in Skin Deep Magic are told from the perspective of a female protagonist. What moved you in this direction?

I’ve always written female protagonists, but those stories were never taken for publication. When idea for a collection came up, I realized how heavily populated my work was by women, both cis and trans. I actually tried to come up with a title that reflected that.  Skin Deep Magic is directly influenced by two African-American female writers—Octavia E. Butler and Toni Morrison.

Octavia E. Butler has been a big influence on me, as well. Now, one of my favorite stories in your new book was “Conjuring Shadows,” which delves into queer history via the Harlem Renaissance. Its brevity, even with the story-within-a-story, is a powerful reminder that we have a past that’s in danger of being forgotten.

Richard Bruce Nugent (whose poem is the epigraph for the piece) was the self-styled dandy of the Harlem Renaissance. He was both a writer and an artist, most famous for his homoerotic prose poem, “Smoke, Lilies, and Jade.” In researching him, I found that he, like me, had deep roots in D.C. Nugent’s biographer, the recently deceased Thomas H. Wirth, kindly let me use the poem “Shadow.” “Conjuring Shadows” was also influenced by Looking for Langston, a short film by black gay British filmmaker Isaac Julien.

I thought it was ironic that the two tales you’ve deemed out-right horror stories, “Death and Two Maidens” and “Sugardaddy,” also deal with socio-economic issues not often associated with horror, much less fantasy. What was the inspiration here?

“Death and Two Maidens” was my response to my research on African-descended Victorians. I wanted to write a penny dreadful story that went beyond the usual (pale-skinned) cast. There’s such a rich history there that has been forgotten. “Sugardaddy” is a kind of dark mirror/bizarro world recasting of Push by Sapphire, which was made into the movie Precious. I wanted to try out the form of writing in a different voice. I think the fictional journal style—also used by Alice Walker and Bram Stoker—is perfect for slow build horror. For both stories, I wanted to write horror/dark fiction that acknowledge diversity and liminality. Darkness happens to everyone; the magical and supernatural don’t erase identity.

One of your stories, “Zora’s Destiny,” features a young Zora Neale Hurston. When did you first discover her work, and what led to you to write about her?

I first became aware of Zora Neale Hurston in college, when her work was then finally back in print. She was an interesting character, and her life is as fascinating as her novels. She actually “ran away and joined the circus,” for instance. Then, she had a life as an academic folklorist, and researched Voudon and Hoodoo. She died in poverty. A few years ago, I found out that the house where I currently live (and that I own) is one street in front of the rooming house that she lived in during her days at Howard University. In fact, we share the same house number. The idea for the (fictional) story just appeared in my brain, and it took a couple of weeks to hammer out. Maybe I “channeled” her ghost!

We’ve hit upon on some of your influences, so I want to do something a bit different now; I want to take this a bit further and throw out some author names to get your take. If you’ve read them, when did you first encounter their work, how did you respond, and, if it impacted your writing, how? First up: Tanith Lee.

I discovered Tanith’s work the same week I discovered the music of the Cocteau Twins, and the two are inextricably linked in my mind. I remember riding the bus to a summer job at D.C. General Hospital. The bus trip was full of the scenery of urban decay, but Tanith’s lush, opiated prose transported me to another world, one where bisexuality was the default orientation, and characters were as likely to be dark-skinned as they were to be light-skinned. I became a fan boy. She’s an acquired taste, but no one quite writes like her. Years later, I helped to get her trippy Gothic lesbian and gay (meta)fiction in print. She’s underrated and should be on college course syllabi!

I inherited my older brother’s collection of books when he went to college, and Dhalgren was included in that. I remember reading the dense, nonlinear text, full of countercultural characters of all races and orientations, and being blown away. I had the opportunity to take a class he taught and being stunned by his associative autodidactism. There are so many ideas zipping through the forests of his prose poetry. I love how he makes genre fiction a tool to understand the breadth of human experience.

Kindred was the first Butler I read. Her muscular, pared-down style illuminates brutal truths. One thing that often gets overlooked from her work is the subtle humor. In terms of subject matter, Butler was and continues to be an immense influence on me.

Baldwin first came to my attention as a speaker, rather than as a writer. I can’t prove it, but I suspect that the reason we studied Richard Wright rather than Baldwin in high school is due to Baldwin’s overt sexuality. I remember watching a documentary about him and being awestruck with his comportment and his wisdom. He was truly a legend, and he still is.

I read The Shadow Speaker first. I was blown away by the depth of her writing. It’s very deceptively simple. On one level, it’s a post-apocalyptic YA adventure story. But it’s chockfull of references to postcolonial theory and Frantz Fanon. Her narratives have that instant readability, but they also operate on a whole other level. She isn’t didactic, but there is a message. Her approach to fiction reminds me of Geoff Ryman’s; it’s work that matters.

A Visitation of Spirits is a classic of magical realism. It’s one of those books that I wish I had written.

Tar Baby is considered one of Morrison’s lesser works, but it was the first one I read. It was marketed as contemporary romance, à la Terry McMillan, so I was surprised when it was one of the books assigned to a college lit course. I devoured the book. It is a love story—a dark, twisted poetic Odyssey-like meditation on Love with a capital L and how it intersects racial identity. It’s full of ghosts and dream logic. I remember thinking that it was as rich and immersive as a secondary world fantasy novel. Morrison is dark chocolate, foie gras and truffle oil all in one.

Circling back to Delany: if I recall correctly, in his introduction to the 1990 edition of Uranian Worlds: A Guide to Alternative Sexuality in Science Fiction, Fantasy, and Horror (edited by Eric Garber and Lyn Paleo), he discussed how speculative fiction represents the world view of the majority—that there’s nothing particularly progressive within the contained genres. Twenty-five years later, you’ve just attended the World Fantasy Convention. Can you give us your “state of the union” in terms of acceptance and celebration within the world of fantasy when it comes to queer folk and people of color?

Sofia Samatar, a woman of color, just won the World Fantasy Award in the novel category last year; that’s a sign of positive change. The WFA is currently the bust of H.P. Lovecraft, a deeply influential, immensely talented writer. Lovecraft was also profoundly racist, going so far as to write a poem denigrating African-descended people. There is currently a petition to change the design of the award; given the slow and steady diversification of the field, the petition will probably succeed. I’m cautiously hopeful in that regard. The field will diversify, because it has to in order to survive. Overall, queer speculative fiction is gaining traction. There’s some amazing work put out both by indie queer presses like Lethe, Valancourt, Blind Eye Books and more eclectic houses like Small Beer Press and ChiZine. Even Big Fat Fantasy novels—by Robin Hobb and George R.R. Martin —feature characters on the LGBTQ spectrum. I consider much of the complaints from the more conservative quarter of the field to be like light from a dying star.