‘You’re Not Edith’ by Allison Gruber

‘You’re Not Edith’ by Allison Gruber 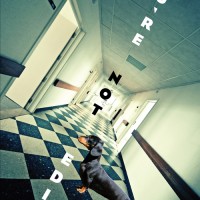 If the autobiographical essays in You’re Not Edith are any indication, Allison Gruber has a surprisingly functional (not to mention intimate) relationship with all things strange and eccentric. From her teenage obsession with primatologist Dian Fossey, to a queasy dachshund called Bernie, her rural Iowa family’s hazardous attempts at arboriculture, and her manic-depressive father who unabashedly believes in the power of rock n’ roll, Gruber’s world is filled with absurdity, dark humor, and potent (if questionable) forms of logic.

In only ten short essays, the reader is introduced to a host of Gruber’s family and friends, often in bursts of dialogue, or a brief side-note. In this way, a sprawling world is populated with characters who feel familiar; this ability to write as though relaying an anecdote as part of a larger conversation is one of Gruber’s greatest strengths. This welcomes the reader into her world, which, with its tangle of oddities and dealings in depression, illness, and abandonment, might otherwise remain thoroughly impenetrable. Much to the reader’s cautious delight, the ramshackle motor of Gruber’s life is firing on all cylinders, fueled by her frank, sometimes abrupt language, and a penchant for bitter observation and dry wit.

The structure of the books is cyclical, beginning with moments from childhood and early adolescence (readers expecting a fraught teenage romance will not be disappointed). As the essays focus more on the author’s adult experiences, the chronology becomes more flexible, interspersing details about teaching, writing, sexuality, and battling cancer. Each separate essay becomes increasingly inseparable from the larger narrative, until the reader is finally re-acquainted with Gruber’s younger life as the manuscript pulls to a close.

In detailing the litany of mental and physical illnesses experienced by herself and her family members, Gruber adopts a kind of earnest resignation–her prose is not without compassion, but neither is it asking for sympathy. It does, at times, seem aimed toward fervently impressing upon the reader the eccentric nature of the situation or persons described, as opposed to allowing the events and actions to speak to their own peculiarities. However, her humor in response to ominous diagnoses keeps the manuscript far removed from any hint of melodrama or self-pity.

You’re Not Edith, unlike the titular fantasy pet, is neither mild-mannered nor impeccably groomed. It is messy, forthright; a grubby patchwork as enthralling as it is unflinching.