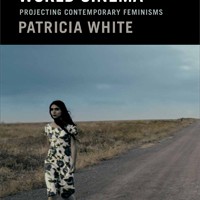 Like many of you, I have hundreds of books tucked away in multiple corners of my apartment. But in my living room I keep twenty or so volumes that are dearest to my heart. They include Patricia White’s pioneering volume of lesbian film criticism, bitingly titled “UnInvited.” I have had to wait a very long time for White’s second book, and while bigger, broader and flashier, Women’s Cinema, World Cinema is another smart, deep and open-hearted achievement I will choose to live beside. White lets us know, in this collection of essays, investigations, speculations, gossip and political insights that feminist cinema is now, in fact, a global event that defies national boundary. It is something to be grappled with in every discussion of cinema and of world culture. And this soon-to-be foundational text, will contribute significantly to that recognition.

White begins her investigation with a highly politicized assessment of the role of international filmmaking. “As Hollywood franchises continue to dominate global film consumption and new technologies alter distribution and viewing experiences, world cinema presents itself as a category that preserves film art and national identity.” It is the asserter of difference, of culturally specific and individual point of view and therefore a force defying American imperial entertainment production. The ability of women to surface and express within this category has its own particular story, after all filmmaking is a lot more expensive than writing a novel. And whether she would call herself a Marxist, or not, White does not just “read” films. She examines them materially–how are they funded, how are they distributed, the politics of film festivals. This is no dream factory. It is the hard political work of women internationally, representing on screen. To cut to the chase, we discover in this book that feminist film is being made everywhere. White discusses directors from Argentina, Bosnia and Herzegovina, Canada, France, India, Indonesia, Iran, Lebanon, Pakistan, Peru, South Korea, and Taiwan, and events such as the Women’s Section of the Sierra Leone film festival. Though she includes two established makers; Jane Campion and Deepa Mehta, White’s primary focus is on women whose first features were made after 2000.

New Zealand’s Campion, the only woman to win the Palme d’Or at Cannes (for The Piano), is the perfect through-the-looking-glass example of an artist representing on both the level of international prestige, and as a singular exemplar of women’s point of view. Cannes is the frontline of male supremacy with only 17 out of 212 feature films screened from 2000-2010 made by women. But White shows how inclusion in Cannes propelled two women directors from the Global South: Lucrecia Martel from Argentina and Iranian Samira Makhmalbaf. Both had international co-production financing, even though Makhmalbaf (daughter of a known dissident filmmaker) works in an environment of strict censorship. They do not use Campion’s “spunky heroines, built-in address to women audiences… or generic conventions of romance or costume drama.” So their manifestations of “feminism” are not derivative of first world feminist aesthetics. Instead they use “high stakes dramas of autonomy and recognition” expressing women’s experience while alluding to the social complicities of their countries’ past and contemporary relationships to authoritarianism. White’s extended analysis of both filmmakers and their individuated feminist markers is thoughtful, instructive and stimulating.

Like all work by women, feminist cinema is often condescended to, marginalized or subjected to reductionist categorization. Laser-sharp, White is fierce in her consistent assessment of how this consensus is constructed. She exposes exclusionary industry standards as based in “aesthetics that are elusive”, and the branding of work as “artistic, in the middlebrow use of that term.” She works with Hamid Naficy’s naming of “accented cinema,” made by exiles, diasporan or ethnic makers living in the West and rhetoric that “that position the films for North American reception in terms of discourses of freedom.” She shows how politically astute, radical films by women are often recast for art house or festival distribution as “exemplars of expressive sensibility, risk, the human spirit, or local color.”

Of particular interest to queer readers is White’s analysis of the reception of Mehta’s film Water. The film’s lesbian content provoked far right Hindu condemnation, riots and consequential highly anticipated reception in the West, enhanced by our need to see India and the Global South as lacking in the western vice of  “Tolerance.” Throughout this impressive volume, White’s grasp is broad. Women’s Cinema, World Cinema roves through Islamophobia, animation, chick flicks, female bonding in Lebanon, Chinese lesbian cinema. All while citing an encyclopedia’s worth of women critics and intellectuals. It’s a book that succeeds in expanding  the reader’s consciousness with wit and bold intellectual drive.