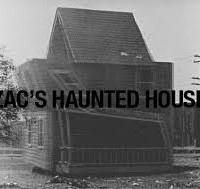 Dennis Cooper’s tenth novel bears all of the earmarks of his legendary and controversial work — intricate formal and stylistic play, disturbing content, an exploration of the borderline between fantasy and reality, concern for the emotions and dilemmas of youth, etc. — but it is both something unique in his body of writing and possibly something of a world’s first in the novel genre itself.

Instead of gathering materials from language, sentences, and the developmental character and narrative possibilities allowed and restricted by written fiction, Cooper has turned his characteristic inventiveness on the animated gif, employing gifs’ tightly wound, looping visual possibilities, nervous rhythms, tiny storylines, and their status as dismembered, twitching eye candy to compose a short novel of unexpected complexity, strangeness, poetry, and comedy.

“Zac’s Haunted House” is as fun and eerie to explore as its namesake attraction, and, the more closely one searches and decodes its carefully detailed sequences and construction, a deep and fraught fiction puzzle.