‘Carry the Sky’ by Kate Gray

‘Carry the Sky’ by Kate Gray 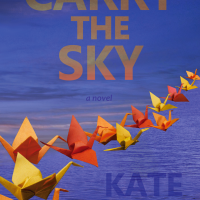 Kate Gray’s debut novel, Carry the Sky is set at St. Timothy’s, an East Coast boarding school where the narrative oscillates between two of its faculty: Taylor Alta, of English, Geometry and Rowing and Jack Song of Physics. We meet Taylor reeling from the recent death of a friend who was more than a friend. Song’s family emigrated from Korea when he was a young child. The parallel of these two voices is one of the novel’s clever structural elements— Taylor and Song are certainly a mind divided: assigning two principal characters disciplines so distant from the other, gives Gray access to a wide range of metaphorical drop-ins: a lesson on Newton, or the tension of water carrying Taylor’s skiff on the river. And we find Taylor and Song’s echo in the secondary cast, students Carla and Kyle. We meet Carla while she’s shaking off and from years of sexual abuse, seeking refuge in her teachers while Kyle struggles with basic social decorum, he is bright, promising and the classic outcast, teased mercilessly by many of his wealthy classmates. In both these relationships we are reminded that in the world, Other finds Other.

The novel’s first strength is its observational language— (poetry was Gray’s first pursuit). The book is sectioned into short chapters, two and three pages —each of them with subtitles as little invitations— each of these chapters begins with the urgent now of the character we’re hearing from. “Can’t breathe. Get away. Phone call from your mom. Your body. Found. Near where your jacket was…Sky gray….I’m down, collapsed like those buildings blown from the inside, collapsing on themselves.”  While each of the chapters moves us along in the narrative—things happen to people, those things are processed— the chapters too have their own mini-arcs, beginning in image or a kind of purity of action as in the above, and settle with a small resolution. The end of this same section: “There is no other world than this, me with a body rising after ten weeks in a river, Carla with all the want red in her eyes, and one little boy with pain marking him inside and out.” These short sections seem the only way this story could be told—how it is to live in grief, in crisis: moment by moment. They’re also the modality of poems—we begin in delight and end in wisdom.

Shortly following this chapter, Kyle commits suicide. Taylor has Carla committed, half afraid of facing repercussions for kissing her and half afraid she’s also suicidal. The bullies move on but aren’t made to answer for themselves.

I have recently learned the etymological meaning of the word “compassion:” it means to suffer with. We find so many kinds of pain in these characters and walk with them as they learn to see, and suffer with, one another. The central questions of Carry the Sky are: How can this be? How can I go on without them? In her poem called Return to Rush and Flutter, Ada Limon writes “You’re the persistent fish swimming/ the same surviving river, un-skinned/ and unhinged by a year of bad weather…{and closes with} the blazing suddenness of a wound overcome by wonder.” Maybe a full justice for the wrongs these characters have endured is not possible, maybe in light of that we write these testaments to the Kyles of the world, who Carla might have been, Sarah’s unrealized love, and and and. Kate Gray has written a stunning book, a blazingly necessary work of fiction for a wounded world.

'Best Gay Stories 2014' Edited by Steve Berman
'Meg and Linus' by Hanna Nowinski
‘Does This Baby Make Me Look Straight? Confessions of a Gay Dad’ by Dan Bucatinsky

Stephanie Glazier’s poems appear or are forthcoming in the Iraq Literary Review, Alaska Quarterly Review, YEW, and others. She has been a Lambda Fellow in poetry and is host of Public Poetry Announcements, a poetry segment on WKAR in Lansing, Michigan. She holds an MFA from Antioch University LA and lives in Portland, Oregon.