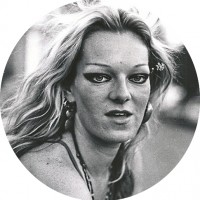 I got real territorial when I found out that Edgewise: A Picture of Cookie Mueller was coming out. I heard through a friend of a friend with art world connections and, while excited, I arched my eyebrow at the thought of Cookie–my Cookie–being brought to the art market. Cookie Mueller was a personality, an actress, a writer, a health guru, a hipster, a go-go dancer and a visionary with a unique and enthralling voice that inspired a small but rabid fanbase, of which I am part. Best known for her appearances in the films of John Waters (from Multiple Maniacs through Polyester), Mueller’s true art was her writing, with columns running in magazines like Details (“Art and About”), the East Village Eye (“Ask Dr. Mueller”) and monographs with great titles, like How To Get Rid of Pimples, Fan Mail, Frank Letters & Crank Phone Calls or Walking Through Clear Water In A Pool Painted Black. Cookie had a unique quality to put the spoken word to paper; her stories leap off the page. Reading Cookie, you feel present on those crazed exploits, dodging the sky-high hotel bill at an international film festival by scaling a chain-linked fence or panicking because you forfeited your child’s passport as collateral on the Fiat you rented then squashed in an inadvertent run-in with a train.

As soon as Edgewise was placed in my hot little hands all of my fears and reservations vanished. Edgewise isn’t a book; it’s a love affair. The writer, Chloe Griffin, doesn’t treat Cookie like a subject to be analyzed, narrativized. No. Griffin befriended those closest to Cookie, who died in 1989 from AIDS-related complications. She gets Cookie–so well that the author’s own words occupy only nine slim pages of text, leaving Cookie to be fleshed out by the precise semantic model that made her such an enigmatic art world and nightlife figure of her time–gossip. 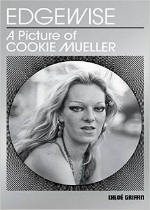 Edgewise is an oral history. Interview subjects range from Waters and his Dreamland crew (Mink Stole, Susan Lowe, Mary Vivian Pearce, Pat Moran etc.) to New York legends and intelligentsia Gary Indiana, Richard Hell, Amos Poe, Linda Yablonsky, Chi Chi Valenti and Chris Kraus. They gab, bicker, differ in their recollections of whom did what to whom and where and, unfortunately, of course, they cry. It’s a rollercoaster of a book, because it was a rollercoaster of a life filled with thrilling nights, brutal fights and an untimely death. Griffin is also wise to bolster these refrains with threads of Cookie’s own stories and words, spinning her yarn as close to the source as it gets, however tall said tale might ultimately have been.

Icons aren’t built up on their own words but through the din of a room, so it’s this collage quality that makes the book so startlingly fresh, vital and effective. Published by Bbooks Verlag, this book mirrors it’s patchwork of voices with a gorgeous zine-style approach to layout, that pastes picture cut-outs in graphic collages, rivaling the oodles of contributors with as many (or more) thrilling archival images and press clippings. These collage approaches are so key to characterizing Cookie, as a figure who breezed in and out of so many scenes. She kept popping up in my own life, through youthful dalliances with Waters, then in photos by Nan Goldin, plays by Gary Indiana. A biography would have been an affront. This gorgeous mélange was the only way to possibly catch glimpse of this genius creature. 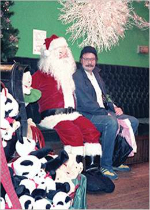 Another  book to land on my desk the very same month takes a similar approach to the archive as its raison d’etre. The George Kuchar Reader, edited by Anthology Film Archives’ Curator of Collections Andrew Lampert and published by New York art press Primary Information, encapsulates its subject’s precarious relationship with the world that embraced him: this is the meticulous and gorgeously produced textbook of a wily and rascally artist set loose upon sociable institutions, in the hallways of the academe. As a budding 8mm filmmaker, George Kuchar (who with his twin brother Mike, produced zany teen exploits like I Was A Teenage Rumpot, The Naked and the Nude and Pussy on a Hot Tin Roof) was embraced in the 1960s by high-minded purveyors of avant-garde film culture and major museums like MoMA. Judging this book by its matte-print, legal-sized cover alone, Kuchar smiles out, bemused, in an adorable photograph of the artist cuddled up next to a stuffed Santa Claus. Panda Bears spill through the left of the frame and a sign sits knowingly behind Santa’s head, “Please Be Gentle With Santa Claus.”

The contents of the beautiful 336-page volume characterize Kuchar’s often manic output which, in moving image terms covered roughly 356 titles in 8mm and 16mm films, video diaries and video productions made with his students each year at the San Francisco Art Institute. Sandwiched in these pages are unlikely artist statements, diary entries, lecture notes, press clippings, professional correspondences, comics, handwritten scripts, drawings, sketches, photos, outlines and, most heartbreaking of all, Kuchar’s final emails to his perennial starlet Donna Kerness. Like Edgewise, Lampert explains in his intro, “reading George on the page is very much like chatting with him over dinner in a Chinese restaurant.” It’s an eloquent introduction that confesses, “that George is by far the best one to relay the biographical facts of his colorful life. As editor of this book, it is my job to not stand in his way. George has a lot to say.”

Does he ever! The writings in The George Kuchar Reader are as obsessive as they are articulate. When Kuchar expounds upon a particular obsession, as he does early on with his famed love of Film and Television of the 1950s, the loquacious colloquia bursting from the page recalls the writing of Kuchar’s contemporary Jack Smith in its intricate mapping of Cinemania. At other times his seemingly modest delivery is deceptively savvy, and this frank blend of fantastical sincerity makes for the most entertaining of reads: “Cameras are at arms [sic] reach for the common man, who eats and walks the street and lives next door, not just for Hollywood or Pine wood Studios… The common man makes movies to see himself, his life, and we see ourselves, through him, because we too are common men… It is humble direct and honest, insane and ridiculous, it is sexy and it is sincere, it is a reflection of a human being, a work of Art of our times.”

“The Movie Book” chapter that immediately follows this passage is a total highlight of the Reader, reproducing–like a flatbed Xerox–an oversized, illustrated scrapbook kept from the 1960s into the 80s, with clipped appraisals, invitations, membership cards, audience complaint forms, pans from Artforum and an invitation to submit to the 1967 almanac Who’s Who in America. Kuchar’s adept transition to video technologies is explained here – with a signature grain of salt, “When I started working in video the hide and metal were gone and black plastic reigned supreme. I always had a fondness for plastic because when it burned it curled up and blistered like a potato chip. I loved potato chips and pork rinds in my youth but never cared for taco chips because they cut the roof of my mouth and then the salt would burn.”

Obsessions evolved and included is Kuchar’s lengthy list of encounters with the third kind, including numerous letters of response from varying sources of scientific credulity. Late in the book, Lampert hilariously (and smartly) prints Kuchar’s letters of recommendation for his students at SFAI: “a very polite and delicate talent with a beautiful head of hair.” By then you’re so punch drunk on this wonderful, intelligent and wacky man’s logic and loves. The generosity ebbing from these letters, in the face of would-be formality, belies the fact that this real trailblazer, through all the fart and boob jokes, took everything so very seriously. There’s a starry-eyed coherence and clarity in the final emails with Donna Kerness, too. A selflessness, that is so truly George. “Poor Larry,” he writes of a courtship in the books final correspondence. “Does he know the emotional storm that has swirled around our affair? He will if he reads [this]!”

Personal Advice from Author Dale Peck: Help, I am an Overly Jealous Boyfriend!
Roxane Gay's Comic Book, Dennis Cooper's Blog, and Other LGBT News
'Waiting Up for the End of the World: Conspiracies' by Elizabeth J. Colen